CES, the Consumer Electronics Show, officially kicked off today in Las Vegas. For tech geeks, this is their Super Bowl. The show is simply massive, with more than 20,000 new product announcements, including plenty of weird gadgets (does anyone need a Bluetooth-enabled binky for their baby?). But there are also lots of cool new innovations—a lot of them so new they don’t even show up on company websites yet. Here are seven high-tech products on display this week for food lovers.

Smarter’s WiFi Coffee Machine is not the first Wi-Fi coffee maker ever invented, but it is the first one that will actually make a fresh pot of coffee every time. With a built-in grinder, you don’t have to remember to fill the filter with grounds the night before you need your morning coffee. And with Smarter’s geofencing option, you don’t even need to push a button. The machine can grind and brew your coffee when you walk in the door.

Lynx is showing off a Smart Grill to take guesswork out of outdoor cooking. You just tell the grill what you’re cooking, and it uses a database to determine how hot the grill should be and even tells you where on the grill to put your meat. All you have to do is flip when the alarm goes off.

We’ve been following the growing food-printing trend over the last year. One thing that has undoubtedly hamstrung any potential early adopters is the high price tag involved—usually well over $1,000 for a machine. But XYZPrinting unveiled a printer that will print cookies, chocolate and a variety of other uncooked items for a predicted price of only $500.

Haier’s sleek mini wine cellar isn’t what you normally imagine when you think about bringing wine to an outdoor event. But the futuristic capsule will keep a bottle chilled for 10 hours wherever you are.

Now you don’t have to worry you’re forgetting something at the grocery store ever again. LG has a line of refrigerators with cameras built inside, so you can double check the contents before you get in the checkout line.

Perfect Bake’s scale and app combo tells you when you’ve added the right amount of every ingredient in a recipe. And it’s already available from Brookstone for $70.

Emiota is debuting a smart belt that expands when you do. Belty (that’s really what it’s called) can tell when your waist grows, and its motor automatically adjusts to your added girth. It’s not just an enabler, though. It also tracks your activity with a built-in accelerometer to let you know you should probably be doing something so that it can contract again. 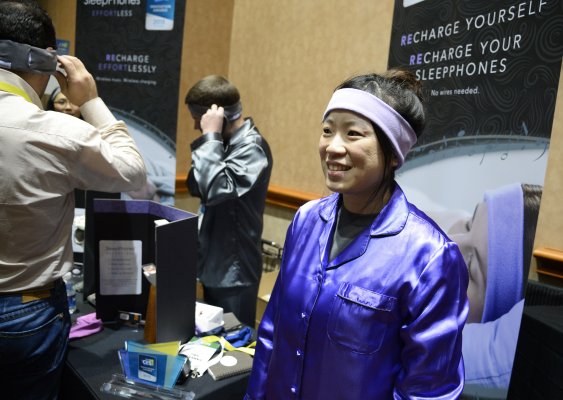 These Apps Track What's Going on in Your Bedroom
Next Up: Editor's Pick