Republicans in Congress Just Made it Easier to Cut Taxes

Nov. 5, 2014. Scaffolding surrounds the U.S. Capitol building while it undergoes repairs in Washington, D.C. Republicans roared back in the midterm elections on Tuesday, capturing control of the Senate from Democrats, winning crucial governor races and solidifying their majority in the U.S. House of Representatives.
Andrew Harrer—Bloomberg via Getty Images
By Haley Sweetland Edwards

In one of the first items of Congressional business yesterday, Republicans gave themselves a new magic wand. When you wave it over a major piece of tax legislation, it has the effect of making the bill appear to be really good for the economy.

Republicans say the magic wand reveals the actual economic impact of the bill. But Democrats worry it’s nothing more than dangerous accounting voodoo that will have the effect of making fiscally irresponsible legislation appear good.

The magic wand at issue here is “dynamic scoring,” an accounting method for determining how a piece of legislation will affect the U.S. macroeconomy down the line.

As of yesterday, House Republicans voted on a rule change that requires the Congressional Budget Office and the Joint Committee on Taxation—both nonpartisan entities—to use dynamic scoring when analyzing the economic impact of major tax and entitlement bills. That means that from now on, CBO and JCT will analyze tax and entitlement legislation differently than they used to, and differently than they analyze other major legislation, such as education or infrastructure bills.

That could change the political calculus of upcoming tax reform legislation substantially. After all, depending on what economic models are used, the same bill could be seen to either cost the U.S. Treasury tens of millions of dollars, or save it billions. For example, Ways and Means Chairman Dave Camp’s comprehensive tax reform bill last year was slated to save U.S. taxpayers either $50 billion or $700 billion in the next decade.

Analysts agree that the Republicans’ rule change mandating the use of dynamic scoring is designed to help them push through major tax cuts by underscoring the most positive impacts such legislation could have on the future economy.

Republicans, such as Georgia’s Tom Price, the new chairman of the House Budget Committee, insist that it’s just a common sense tweak. “We’re saying, ‘If you think a piece of legislation is going to have a big effect on the economy, then include that effect in the official cost estimate,’” Price wrote in a statement. “So if you think a bill is going to help or hurt the economy, then tell us how much you think it will increase jobs, tax revenue—and vice versa. We need to take that into account.”

Democrats like Sens. Chuck Schumer and Bernie Sanders, meanwhile, have screamed bloody murder. Dynamic scoring, they say, is an accounting trick that exaggerates the real cost of some bills while masking the real cost of others.

House Democratic Whip Steny Hoyer said the rule change politicizes the accounting process. “What it means is the Republicans will be able to hide the true costs of tax cuts behind a debunked mantra that tax cuts pay for themselves. They do not,” he said on the House floor Tuesday afternoon, pointing out that deficit hawks should be up in arms, too. “This provision will allow them to explode the deficit, as they did the last time they were in charge.”

Several Democrats quoted Bruce Bartlett, a former Reagan and George H.W. Bush administration official who condemned “dynamic scoring” as a sneaky and conniving political move. “It’s not about honest revenue-estimating,” he said. “It’s about using smoke and mirrors to institutionalize Republican ideology into the budget process.” 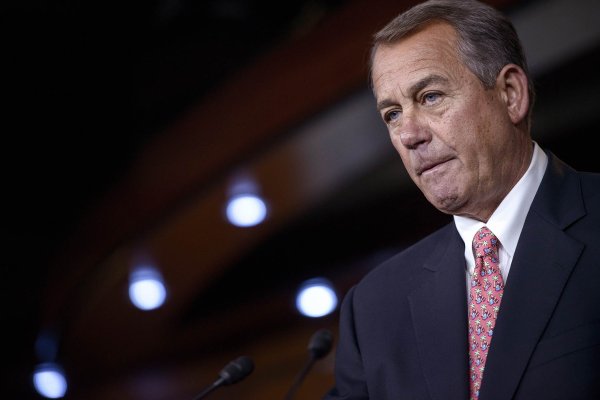 Why One Republican Voted Against Boehner for Speaker
Next Up: Editor's Pick