The deadly terror attack on satirical newspaper Charlie Hebdo in Paris comes just as a controversial novel is released by one of France’s most celebrated authors, imagining France being governed by an Islamist party within the next decade.

And the cover of the newspaper’s Jan. 7 issue featured a cartoon of that author, Michel Houellebecq, whose latest work in a career marked by controversy, Submission, came out on Wednesday.

The novel, both panned as poor, scaremongering fiction and praised as thought-provoking social criticism, envisions an Islamist party winning the French elections in 2022 and enacting conservative Islamist policies.

On the newspaper’s cover, Houellebecq is dressed as a sorcerer smoking a cigarette and announces that in “in 2022, I’m observing Ramadan!” A caption above reads: “the predictions of the wise Houellebecq.”

Authorities have not identified the attackers nor their motive, and it’s not clear that the Houellebecq cover played any role; Charlie Hebdo, which has a history of lampooning Islam, has been targeted in the past, and cartoonist and publishing director Stephane Charbonnier, who was killed in Wednesday’s attack, was included on an Al-Qaeda “wanted list” in 2013.

But Houellebecq, 58, is known for his provocative commentary on Islam and other topics in interviews and in his six novels. After the attack on Charlie Hebdo, the publisher of Submission was evacuated and the author was placed under police protection.

His 2001 novel Platform, about a travel agency that promotes sex tourism to Thailand, put him at the center of discourse on Islam because of its depiction of an Islamist terror attack. He was investigated for inciting racism after he said in an interview about the book that “all religions are stupid but Islam is the stupidest of all.” He was cleared on free speech grounds in 2002.

His latest book plays into French concerns over its growing Muslim population, which is the largest in Europe. The novel’s name from from the title of a documentary by the Dutch filmmaker Theo van Gogh, whose 2004 film Submission addressed the treatment of women in Islam. Van Gogh was murdered by a Dutch-Moroccan Muslim man that year.

Houellebecq’s novel has been accused of scaremongering and of empowering the French right-wing, anti-immigration party, the Front National, which has already seen its support grow in recent years. Houellebecq has denied taking sides and says that his book is not Islamophobic. “I don’t think the Islam in my book is the kind people are afraid of,” he said in an interview on France 2 TV on Tuesday night. “I’m not going to avoid a subject because it’s controversial.”

The New York-based literary magazine The Paris Review once asked Houellebecq how he had “the nerve to write some of the things you do?” “Oh, it’s easy,” he responded. “I just pretend that I’m already dead.” 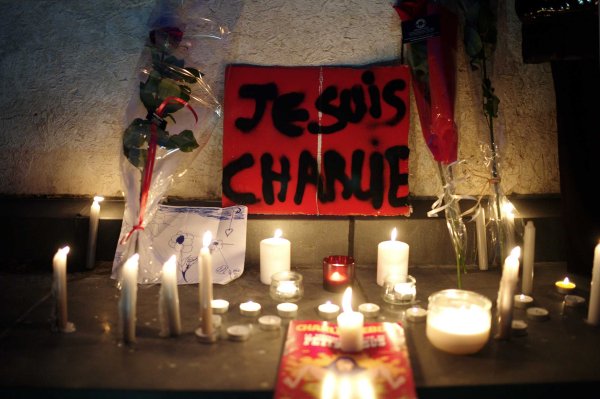 Thousands Tweet Support for French Paper and Satire After Deadly Attack
Next Up: Editor's Pick