No CES booth is complete without props—people or things companies use to grab your attention, whether it’s a giant puppet, celebrity guest, or larger-than-life cardboard blow-up of the product itself.

We stomped around CES for a full day in order to crown a winner. Which booth would feature the most awesome, crafty, or ridiculous visual aide? Before we run down the list, a few rules:

1) Props are props, not products. If your company sells cars, and the car is parked at your booth, that’s cool, but that’s not a prop.

2) Props that say something important about the product or brand beat out products that simply caught our attention. Smarter is better.

With that out of the way, here are the best props we found at CES 2015, from number 15 to the very best.

Samsung’s SUHDTV is the company’s new flagship TV, and it’s got a bizarre, DNA-like helix right behind the displays. We still don’t know what the “S” stands for, and we’re clueless about what the helix means, but we can’t deny we’re intrigued.

Basketball hoops are pretty common at CES, so ZTE loses a few originality points, but give them credit for the ball rack, runway, and trampoline, an ambitious setup that beats out every other ball-related CES exhibit.

Semiconductor-maker Qualcomm couldn’t be more important to the industry, even if most casual consumers have never heard of them. So what better way to capture that unique combination of obscurity and importance than in a dragon robot with wheels? We can’t explain it, but we love it.

Panasonic has all kinds of things going on at this year’s CES, from scooters to Blu-ray players to connected homes. But their biggest prop of all is a giant pair of headphones, which provides an appropriate nod to the company’s classic products.

With the explosion of smartwatches, gadget displays are getting smaller, but LG wants to remind us that they’re excited about wearable tech. Really excited. And so we get a massive blow-up of the new LG G Watch R.

Robo-vaccuum displays tend to be small and understated, featuring simple household devices a few unimposing dust bunnies. Not so for Ecovacs. The robotics company plopped a full-sized solar panel in the middle of the show floor, complete with an always-running Raybot cleaner. Bold but effective.

It’s easy to dismiss Sony’s train set at a glance, but the prop—located near the middle of Sony’s show floor—is smart for several reasons. For tinkerers and gadget enthusiasts, the set might spark a bit of train set nostalgia, the sort of toy you might have built in your basement or garage. What’s more, the prop helps illustrate how Sony’s cameras can capture the passage of time. It’s a neat display that works even better the longer you spend with it.

While many of Mo-Fi’s competitors are focusing on the modern-day (think hip hop and celebrities), Mo-Fi looks back. Their classy display of old-school microphones sets the tone for a booth that oozes retro jazz and classic radio.

It may not match the product perfectly, but when you’ve got a real-life magician shuffling a deck of cards in Vegas, what more can you ask for? Bonus points for his uncanny ability to slip Sage talking points between shuffles.

Most robotics and drone companies simply feature a large playpen for flying, fighting, and driving around their products. WowWee presents a fighting ring, with robotic dragons and a game balls to spar over. The added narrative helps sell the robots’ best features.

4. A Treadmill in a Fitbit

While Fitbit’s overall booth was a bit underwhelming, their central prop was spot-on, a treadmill housed inside an oversized Fitbit device. Fitbit is becoming the face of the industry, and reinforcing their iconic design with an eye-catching prop was a smart move.

DisplayPort offers the very definition of a prop: their cable-constructed throne sits apart from the rest of their products, but it tells the company’s whole story in a single glance. Well done. (Though we do feel they are conflating Game of Throne’s Iron Throne and Lord of the Ring’s familiar slogan, which is a bit odd.)

The Japanese consumer electronics maker takes the CES prop a step further by centering their entire exhibit around it. Featuring an enormous action figure inspired by the British rock band Iron Maiden, the company encourages guests to take a snapshot and share the results. It’s a prop, product, and marketing play, all in one.

Canon’s exhibit would still have worked without it, but their basketball-spinning baller ties the whole booth together. With this dynamic, human prop, Canon can show their image quality, motion capture, PC connectivity, and even printing capabilities, all in one seamless process. It’s visually arresting and it demonstrates multiple Canon products, earning Canon the honor of CES 2015 Best Prop. 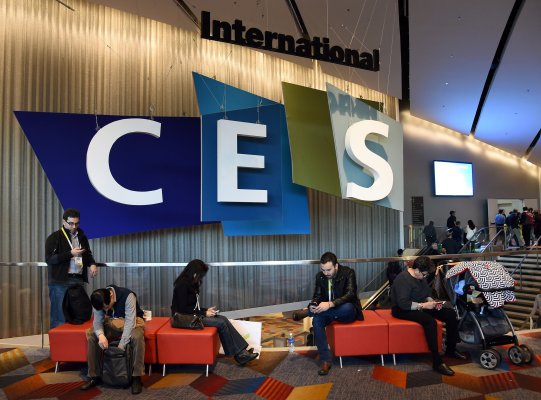