People stand outside the French satirical newspaper Charlie Hebdo's office after a shooting, in Paris on Jan. 7, 2015
Thibault Camus—AP
By Megan Gibson

The motivation behind the attack that has left at least 12 people dead at the office of French satirical weekly Charlie Hebdo on Wednesday appears to be its long history of mocking religions, in particular Islam. According to some witnesses, the gunmen said they were defending the Prophet Muhammad as they opened fire.

The most recent tweet from the publication featured a cartoon of the leader of the Islamic State in Iraq and Greater Syria, Abu Bakr al-Baghdadi.

Yet this isn’t the first time the provocative left-wing weekly has found itself under threat.

Charlie Hebdo was introduced in 1970 after another publication, Hara-Kiri, was banned for mocking the death of former French President Charles de Gaulle. Much of Hara-Kiri’s staff simply migrated to the new publication, which was named in reference to Charlie Brown comics. Hebdo is short for hebdomadaire which means weekly in French.

Though the publication has never found wide circulation, it quickly made a name for itself thanks to its incendiary cartoons, which took shots at high-profile figures, including the far right, politicians and celebrities, and religions of all kinds. Just last month, an edition featured a cartoon of the Virgin Mary, spread-eagled, giving birth to Jesus.

In 1981, Charlie Hebdo ceased publication because of a lack of funds, though it was resurrected in 1992. In 2006, the publication caused widespread controversy when it republished the controversial cartoons of the Prophet Muhammad that were first printed in the Danish newspaper Jyllands-Posten and prompted protests from Muslims around the world. Charlie Hebdo’s reprint of the cartoons — not to mention the addition of their own work — gained it as much notoriety as the Danish newspaper. The issue saw unusually high sales, but drew criticism from many Muslim groups. France’s then President Jacques Chirac released a statement at the time saying, “Anything that can hurt the convictions of someone else, in particular religious convictions, should be avoided. Freedom of expression should be exercised in a spirit of responsibility.”

MORE: What to Know About the Paris Terror Attack

Charlie Hebdo responded by publishing a letter, signed by 12 writers and intellectuals including Salman Rushdie and Ayaan Hirsi Ali, which read, in part, “We, writers, journalists, intellectuals, call for resistance to religious totalitarianism and for the promotion of freedom, equal opportunity and secular values for all.”

The following year Charlie Hebdo was sued by two French Muslim associations, the Great Mosque of Paris and the Union of Islamic Organisations of France, for reprinting the Danish cartoons. A French court rejected the case, saying the publication’s decision to publish the images did not incite religious hatred.

Yet the backlash over the publication’s provocative critique of Islam continued — sometimes with violent consequences. On Nov. 2, 2011, Charlie Hebdo’s offices were firebombed and destroyed the day after the magazine announced the Prophet Muhammad as its “editor in chief” for its next issue. The cover also carried a caricature of the Prophet. As that attack took place in the early morning hours, no one was injured.

The publication’s editor Stéphane Charbonnier, who also published cartoons under the name Charb, told the BBC following the firebombing, “If we can poke fun at everything in France, if we can talk about anything in France apart from Islam or the consequences of Islamism, that is annoying.” Charb is believed to have been killed on Wednesday.

The following year, after the weekly published more provocative caricatures of the Prophet Muhammad, French officials announced they would temporarily close French embassies, consulates, cultural centers and schools in more than a dozen Muslim countries for safety. Despite the condemnation from multiple groups, Charlie Hebdo defended its editorial choices.

“The aim is to laugh,” Charlie Hebdo journalist Laurent Léger said at the time. “We want to laugh at the extremists — every extremist. They can be Muslim, Jewish, Catholic. Everyone can be religious, but extremist thoughts and acts we cannot accept.” 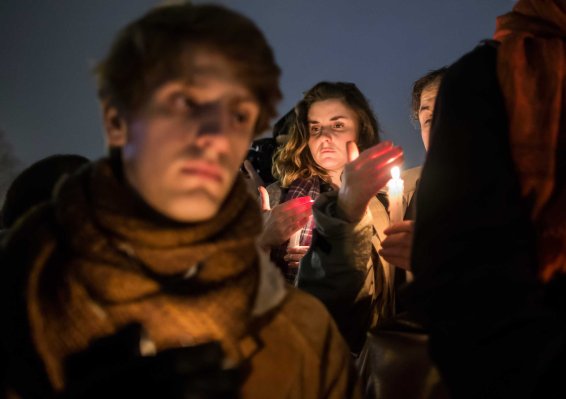 Paris Rocked by Terror
Next Up: Editor's Pick