More Cold Weather Is On Its Way

Commuters make their way to work as temperatures hovered around zero degrees Fahrenheit during the morning rush in Chicago on Jan. 5, 2015
Scott Olson—Getty Images
By David Stout

More frigid weather is expected across the Midwest and into the Northeast on Wednesday, with officials calling on residents to take all necessary precautions.

The National Weather Service warned late Tuesday that blasts of arctic air from the north will bring “bitterly cold weather from the western High Plains to the Mid-Atlantic and Northeast.” The agency reported that subzero overnight lows were forecast for the Dakotas, Upper Midwest, Great Lakes, and New England throughout Tuesday evening.

“Wind chill advisories and warnings are in effect for many of these same areas, with some of the coldest wind chill readings in the -25 to -45 degree range” said the agency.

Wind chill warnings were issued this week in at least 17 states across the Great Plains to the East Coast after heavy snowfalls covered the region on Tuesday, snarling traffic and causing the cancelation of hundreds of flights, according to the Weather Channel.

In Chicago, authorities announced the closure of public schools throughout the city on Wednesday as temperatures are expected to fall below zero with wind chills up to 40 below.

In New York City, Mayor Bill de Blasio called on New Yorkers to be mindful of their neighbors and begin preparing for the winter storm.

“The city will deploy all tools at its disposal to reach our most vulnerable populations — the elderly, people with medical challenges, the homeless — but we ask our fellow New Yorkers to help,” said the mayor in a statement.

Temperatures are expected to drop to 9 degrees in New York City on Wednesday night, with wind chill values averaging between zero and -15 degrees.

Further north in the Great Lakes region, more snow is expected to blanket much of the same area that was hard hit by the record snowfall in late November that killed at least 13 people.

“The heaviest snow is likely to occur east of Lakes Erie and Ontario, where local amounts will easily exceed one foot,” read a report released by the National Weather Service. 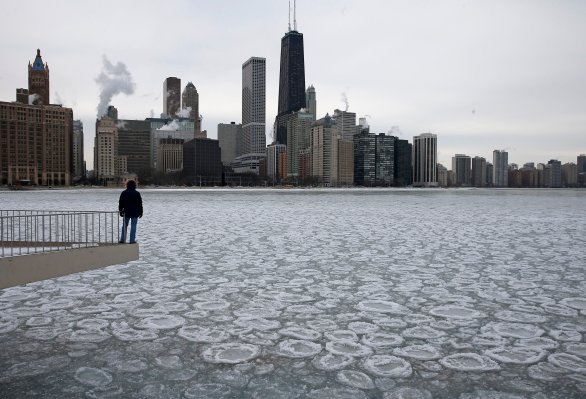