Senate Minority Leader Harry Reid wasn’t able to make it to Capitol Hill today for the first day of the new Congress, but in a new video he pledged to keep fighting.

The Nevada Democrat, who broke bones in his face and three ribs while exercising at home on New Year’s Day, stayed at his home in Washington on the order of doctors.

But in a video posted on YouTube, he said he was feeling some “homesickness” that he couldn’t be on the Hill for what is now his 33rd year in office. Instead, he met with other Democratic leaders at home to discuss how to “continue to fight for good things for this country.”

“As most people know, I fought for a couple of years. After any one of those fights, I never looked like I do now,” he said.” However, I didn’t get this black eye by sparring with Manny; by challenging Floyd Mayweather; I didn’t go bull-riding; I wasn’t riding a motorcycle. I was exercising in my new home.” 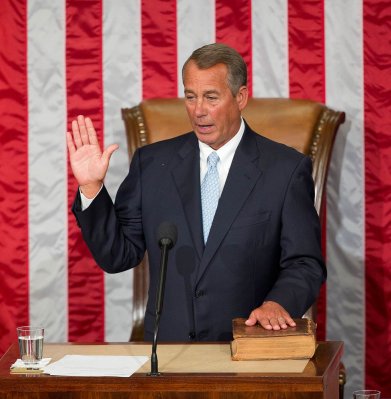