Here's the $200 Competitor Oculus Should Worry About

Imagine a world in which virtual reality standards weren’t dominated by mega-billions corporations with sometimes controversial agendas. It’s not the world we live in, but PC peripheral-maker Razer wants us nudge us in that direction with something it’s dubbed OSVR, or open-source virtual reality.

On paper, OSVR is just what it sounds like: an idea for a standard that’s still just a proposition. Razer says it wants to “push the the VR gaming experience forward,” meaning it wants to plant its flag on challenge that matters most when you’re after winning hearts and wallets by delivering experiences and not just overhyped promises: developer support.

Razer’s basically pitching OSVR as an initiative to get the ball rolling on the software side, the idea being to support a flourishing ecology of hardware and software components in a harmonious VR ecosystem that even works hand in glove with Oculus Rift. If Oculus wants to be the iOS of VR, Razer’s positioning OSVR to be the Android.

If Razer’s pitch were just another rhetorical PR flourish, you might write it off as wishful thinking from a niche power player. But Razer appears to be doubling down with what it’s calling its OSVR Hacker Dev Kit, a bona fide wraparound VR headset accompanied by open-source software “that enables programming for any variety of VR technology.” What’s more, priced to move at $200, it could be $100 less expensive than Oculus’ Rift when it ships this year in June.

On paper, the headset sounds compelling: Razer claims it’s managed to work out an optics solution that reduced distortion to less than 13%, providing what the company calls “an almost perfect image.” You’ll view that image through a 5.5-inch 1920 by 1080 panel with a 100-degree field of view running at 60Hz (thus 60 frames per second)—a step down from the Oculus Rift DK2’s 75Hz. Standard features like an accelerometer, compass and gyroscope are present, but lacks positional tracking hardware (the DK2 has this), though you could remedy this with a hardware plugin.

Want to build one yourself? In keeping with open-source principles, Razer says it’ll support that, too, allowing intrepid DIY’ers to freely download the device’s 3D files, to be printed and assembled into a working headset. (In fact, the plans are available for request from osvr.com right now.)

Note that Razer isn’t the first to pose an open-source VR standard: a group called the Immersive Technology Alliance announced yesterday that it, too, wants to see open-source standards emerge for VR and beyond–the ITA’s scope sounds like it may be broader, encompassing everything from VR devices to related peripherals like cameras, sensors, phones, motion controls and so forth, though as noted by Tom’s Hardware, the ITA, like Razer, intends any such standard to be complementary to what Facebook and Oculus VR are up to, not adversarial. 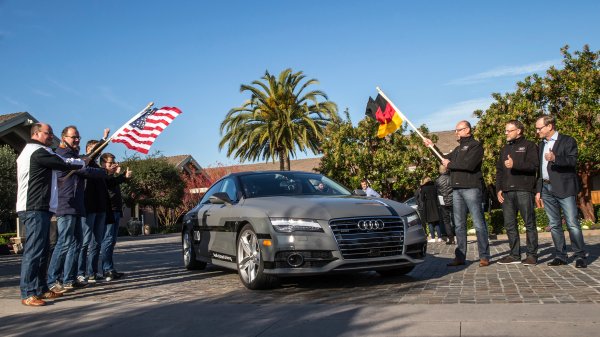 This Is the Audi That Is Driving Itself 550-Plus Miles to CES
Next Up: Editor's Pick