Israeli Infiltration Suggests Hizballah Is Having a Mid-Life Crisis

Hezbollah fighters hold their party flags and stand next to a portrait which shows their slain top commander Imad Mughniyeh, as they attend a rally to commemorate Mughniyeh and two other leaders, Abbas Musawi and Ragheb Harb, in the Shiite suburb of Beirut, Feb. 22, 2008.
Hussein Malla—AP
By Thanassis Cambanis/Beirut

For five years, Hizballah has vowed in fiery speeches to exact revenge for Israel’s assassination of its top military strategist in 2010. Each anniversary passed with Hizballah’s threatened attacks mysteriously foiled: operatives rolled up in Bangkok and Cyprus, and another mastermind murdered near his home in Beirut.

A recent revelation suggests the failure wasn’t so mysterious after all: a Hezbollah official responsible for the revenge attacks might have been on Israel’s payroll the whole time.

The unmasking of the Israeli spy in Hizballah’s uppermost ranks — leaked in media reports in December and indirectly confirmed over the weekend by Hizballah’s deputy leader — points to Hizballah’s biggest long-term problem: its size, wealth and power have made it vulnerable to infiltration, corruption and careerists.

The militant organization, whose name means Party of God, was founded in 1982 to resist the Israeli occupation of south Lebanon but it has grown into an entrenched and wealthy part of the Lebanese establishment. Now in its fourth decade, Hizballah has more power than its founders could have dreamed.

But no longer a compact revolutionary movement, Hizballah must now grapple with the consequences of growth and longevity. Some supporters now take Hizballah for granted while the party’s swelling ranks of cadres and fighters contain opportunists and careerists.

Hizballah has become a state in all but name. It deploys troops to fight in a foreign war in Syria, it is a power-broker in Lebanon’s national government and it struggles to satisfy constituents who have grown accustomed to a higher, and safer, standard of living. It is subject to the same temptations and vulnerabilities as Arab governments and other legacy actors in the Middle East. The intelligence war with Israel marks just one particularly colorful and acute sign of its approaching middle age.

Hizballah began to suspect it was compromised after a series of inexplicable setbacks, including the capture of two of its agents following a bombing in Burgas, Bulgaria in 2012. In order to track down the mole, Hizballah fed false information to one of its officials, Mohammed Shawraba, about weapons shipments in Syria. Israel bombed the false target and after a seven-month investigation, Hizballah arrested Shawraba.

The double agent might have foiled as many as five planned retaliations by Hizballah, according to reports that also tied him to the two most damaging Israeli strikes against Hizballah since the 2006 war: the assassinations of military strategist Imad Mughniyeh in Damascus in 2008 and of Hizballah technology mastermind Hassan Laqees in Beirut at the end of 2013.

Yet it’s the parade of related cases that have piled up since the last major conflict between Israel and Hizballah in 2006 that suggest something broader is afoot. Hizballah revealed in 2011 that it caught some of its operatives cooperating with the CIA, meeting at a Pizza Hut on the edge of south Beirut to sell Hizballah secrets to the Americans.

A trusted car dealer in southern Lebanon sold senior Hizballah officials cars that had Israeli GPS trackers in them. He was arrested by the party in 2009.

Another Lebanese man was revealed to have worked as a spy for the Israelis, monitoring traffic on key roads to the Syrian border.

A financial scandal erupted at the same period, in 2009, when a Ponzi scheme collapsed and erased the savings of many of Hizballah’s middle-class constituents. The scheme was run by Salah Ezzedine, a well-connected businessman (nicknamed Hizballah’s Bernie Madoff) who had persuaded senior Hizballah officials to invest their money with him, and who had founded a publishing house named after party leader Nasrallah’s son. Ezzedine lost between $700 million and $1 billion, according to news reports at the time.

A final straw came in 2012 when a senior Hizballah official who had been embezzling money fled to Israel. Reports suggest he was stealing for his own benefit, pure and simple, but when he was about to get caught he fled to Hizballah’s greatest enemy with his money and party documents.

All these cases point in one direction: toward more corruption and more Israeli infiltration.

Hizballah’s initial appeal in the 1980s and 1990s was its incorruptibility and zeal. In a country dominated by kleptocratic warlords, Hizballah stood out in its first two decades as an organization whose leaders did not care to enrich themselves. Their first priority was to expel the occupying Israelis. Their second was to help their suffering constituents, most of them Shia Muslims displaced by the civil war and crowded into miserable slums on the edges of Beirut. In those first decades, Hizballah brought sewers, electricity and clean water to south Beirut, and its leaders lived simply.

Today, things are different. At the very top, Nasrallah lives in hiding, and by all reports remains committed to the group’s humble ethic. But the organization he runs is awash in money. After the 2006 war, Iran flooded Hizballah with millions of dollars to rebuild homes and roads. Since 2011 there’s been yet another burst of spending linked to the war in Syria. Over the objections of many Lebanese — and the grumbling of some supporters who thought Hezbollah should maintain its focus on Israel — Hizballah dispatched troops to fight on the regime’s side in the Syrian civil war. At first the deployment was kept secret, but today Hizballah openly sends troops and celebrates its members martyred in Syria. The organization has dramatically increased its spending on fighters and their families and has expanded the size of its military force in order to maintain a deterrent against Israel while fighting in Syria. Hizballah has become a standing army capable of fighting a war on two fronts where it was once a guerrilla army. That’s an expensive development and not one that necessarily carries the same appeal as Hizballah did when it was fighting a war of resistance on its home territory against a much stronger Israeli occupation force.

Today, it appears, there are Hizballah insiders willing to sell crucial secrets to the enemy. There are others who seem happy to siphon money out of the Party of God’s pockets for their own enrichment, just like operatives in all the rest of Lebanon’s notoriously corrupt factions.

In comments over the weekend to Hizballah’s “Nour” radio station, the party’s number-two, Naim Qassem, said that Hizballah was made up of fallible humans but was able to contain the “limited” fallout of the spy cases.

“Hizballah has worked intensely on battling espionage among its ranks and in its entourage. Some cases surfaced, and they are very limited cases,” he said. “There is no party in the world as big and sophisticated as Hizballah that was able to stand with the same steadfastness.”

That makes sense as spin, and Hizballah can obviously survive — the question is, with how much damage.

Until the 2006 war, Hizballah successfully stood apart in Lebanon. It was a Shia organization, but it opposed sectarianism. Even those who didn’t share Hizballah’s dedication to fighting Israel recognized that the militant group placed that goal over its own power and enrichment.

In its rise to power, however, Hizballah has relied on support from some of Lebanon’s most corrupt factions, including the Shia Amal Movement and the Christian Free Patriotic Movement.

Today, Hizballah is a party of the establishment, deeply invested in a Lebanese order that depends on patronage and sectarian balancing. It is unlikely that corruption and spy scandals will unseat Hizballah from its dominant position in Lebanon. But Hizballah’s descent from the moral high ground it claims as unimpeachable standard-bearer of the Lebanese resistance seems only a matter of time.

Thanassis Cambanis is a fellow at The Century Foundation and the author of Once Upon a Revolution: An Egyptian Story. He also wrote A Privilege to Die: Inside Hezbollah’s Legions and Their Endless War Against Israel. 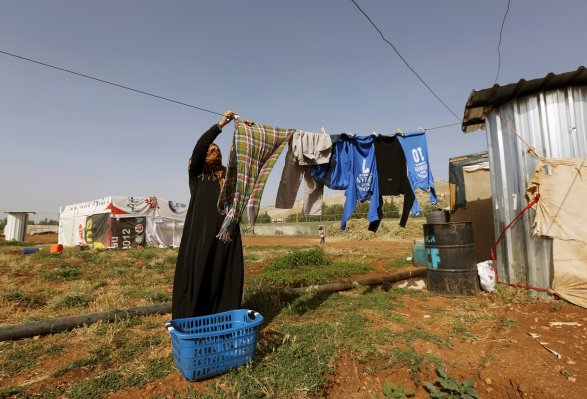 Visa Limits Imposed on Syrian Refugees Headed to Lebanon
Next Up: Editor's Pick