In the final moments before entering federal prison, faced with the prospect of serving 15 months, Real Housewives of New Jersey star Teresa Giudice handled the situation as best she could.

Her last words to her attorney, James J. Leonard Jr., when he delivered the 42-year-old mother of four to the Federal Correctional Institution in Danbury, Connecticut, at 3 a.m. Monday, were, “I’ll be fine,” Leonard tells PEOPLE.

Shortly after midnight, Leonard picked up Giudice at her $3.9 million mansion in Montville Township, New Jersey.

“She was upstairs when I got to the house,” he tells PEOPLE. “I’m assuming she was with her children. I tend not to ask people about things that are outside of my area.”

Teresa’s husband, Joe Giudice, 44, “was somber,” Leonard says. “The enormity of this entire situation hit him.”

After saying goodbye to Joe and her four daughters – Gia, 13, Gabriela, 10, Milania, 8, and Audriana, 5, – the reality star climbed into the back seat of Leonard’s black SUV and headed to the minimum security prison for women to serve her time after her March conviction for fraud.

Leonard says that during the 90-minute drive he tried to keep the conversation from getting heavy.

“If I have to drive with someone for one-and-a-half to two hours who is on their way to prison, I’m not trying to get them emotional,” he says. “I try to keep it light with jokes and talk about things that are light. So it was light from the time I saw her until the time I left her. She was great. She was very strong. She said, ‘I know I am going to get through this.’ She was very, very upbeat. She was like, ‘Hey. Let’s go. Let’s get this done.’ ”

Giudice was supposed to appear at the prison by 10 a.m. on Monday. But, says Leonard, on New Year’s Eve, Giudice asked him if she could turn herself in before that. Officials agreed to let her surrender at 3 a.m. and let her use an alternate route in order to avoid the likely media attention outside the prison main entrance, he says.

“The reason she wanted to go early was because she didn’t want to have her children wake up on Monday morning and see a big [media] circus outside of the house,” he says.

Because they had time to spare before her arrival, she stopped off at a local diner just before 2 a.m. “She had a breakfast sandwich and some coffee,” Leonard says. “She was joking that she shouldn’t be eating at this hour. I said, ‘You could make an exception.’ So she ate.”

When she arrived at the facility, Giudice spent between 10 and 15 minutes in the pre-processing area, where officials introduced themselves to her.

“They talked about starting her commissary account. They told her she would be able to make her first phone call within 24 hours once they had her account set up. They said they were going to make it possible for her to meet with her immediate family this weekend. So she was very happy with that. There weren’t going to be any delays with that stuff,” says Leonard.

“Everybody was extremely respectful and courteous. It was very easy to ease her way into this because everything was positive. There was a lot of positive energy there.”

Leonard presented her with a set of rosary beads and a necklace with two medals – one for St. Christopher and one for St. Teresa.

“They let her keep all of that,” he says. “She was very happy with that, and she told me she would keep them with her all the time.”

When it was time to say goodbye, he says he hugged her and told her, “You’re going to be fine.”

“She said, ‘Yeah. I’ll be fine,’ ” he says. “She was very stoic and very strong. I left them there. They didn’t handcuff her. She was just standing there.”

Leonard had no sooner left the building when he returned to use the restroom.

“As I was walking back, they were walking her out of the first building to another building,” he says. “She saw me and said, ‘What are you doing?’ I said, ‘I’m breaking you out of here.’ She laughed and said, ‘I wish.’ ”

He continued: “The last thing she said to me was, ‘I’ll be fine. Tell Joe and the girls I’m good.’ ”

He isn’t sure if the children will come visit her this weekend. “But they will 100 percent come see her,” he says. “I think she wants to see them whenever she can.

“Her kids aren’t just the No. 1 [priority] in her life. They are the only one,” he says. “The entire time I have been involved with her, the only thing she has talked about in connection with this prison sentence is how it is going to affect them – not her.”

Giudice reportedly spent her final day of freedom attending Mass at a New Jersey church with her husband and four daughters. Her husband drove the girls to school early Monday morning.

He also pleaded guilty last year to multiple counts of bankruptcy fraud and conspiracy to commit mail and wire fraud. When his wife is finished serving her sentence, he will serve 41 months in prison. He also may face deportation after his release because he is not a U.S. citizen. 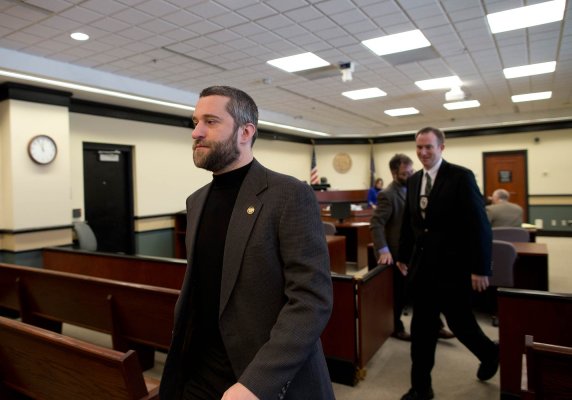 Saved by the Bell Actor Must Stand Trial in Stabbing Case
Next Up: Editor's Pick