Policemen stand in formation as they guard on the bund where people were killed in a stampede incident during a new year's celebration, in Shanghai on Jan. 3, 2015.
China Stringer Network/Reuters
By Elizabeth Barber

Shanghai authorities are seeking to control discussion of the New Year’s Eve stampede that caused the deaths of 36 people and raised questions about the ability of police to manage large-scale events in the world’s most populous nation.

Relatives of those asphyxiated and trampled to death during Dec. 31 celebrations say they are being closely monitored by authorities for what they say, and to whom, about the disaster, the South China Morning Post (SCMP) reports.

Family members of the victims also say that authorities are preventing them from taking home the bodies of their loved ones.

Local reporters have been barred from speaking with family members of the deceased, as well as from running non-government-approved photos, especially photos that depict people grieving, the Financial Times (FT) reports.

Chinese censors are also going after online commentators who blame the Shanghai government and police for the disaster, deleting the posts, tracking down the writers and summoning them for interrogation.

The crackdown comes as the public seeks answers into what went wrong on what was supposed to be a night of merrymaking at the Bund, the historic riverfront area that looks across the water to the city’s financial district.

As Chinese President Xi Jinping on New Year’s Day called for an investigation into the disaster, state-run media also carried stinging criticism of Shanghai authorities for the holiday tragedy, whose victims included one 12-year-old boy but were mostly women in their early 20s.

The President demanded that lessons be learned before the city staged some of the nation’s largest celebrations during Lunar New Year festivities next month.

“It was a lack of vigilance from the government, a sloppiness,” said state news agency Xinhua, in an editorial (according to a Reuters translation). The news agency continued to say in an English-language editorial that the tragedy was a “wake-up call,” underscoring China’s status as “a developing country which has fragile social management.”

But despite the central government’s pledges of an investigation — as well as the state-run media’s flagellation of Shanghai authorities — locals say they are encountering intimidation from local officials as they seek answers to the many questions the stampede raised: Why, if the annual laser-light show at the Bund was canceled for safety reasons this New Year’s Eve, were hundreds of thousands of revelers allowed to show up regardless? And, could police have done more before and at the critical moment, around 11:30 p.m., when congestion turned lethal on a set of stairs?

The SCMP, citing an unnamed officer, reports that dozens of people who discussed those questions and others online have been interrogated by Shanghai authorities. The officer described the interrogations as “a warning to those unfriendly Internet users.”

Local media have also been barred from interviewing relatives of the victims or the attendees of memorial services, and have been instructed to downplay the disaster, the FT reports. The homepage for Xinhua’s English website carried no mention of the Shanghai disaster by Monday afternoon local time.

The FT adds that Chinese news outlets have been told remove from their own coverage “all information about attacking the party and government and attacking the social system of our country.”

Access for nonmainland media reporting on the disaster has also been hampered. One SCMP reporter was interrupted several times while trying to conduct interviews with victims’ families by people who identified themselves as hospital volunteers, the Hong Kong–based newspaper says.

One father whose daughter was killed in the stampede, and who rebuked police for poor crowd control, declined to give his name to the Associated Press, citing a “fear of offending the authorities,” as the news agency puts it.

Meanwhile, families of the victims held protests on Sunday outside a municipal building in Shanghai, demanding to take home the bodies of their relatives. It was unclear why the bodies of the 34 Chinese citizens killed in the pandemonium are being held, even after the remains of the two foreigners killed in the disaster, a Malaysian and a Taiwanese, were returned to their home countries.

Under the close scrutiny of police, people laid flowers at the scene of the stampede over the weekend and waited for news on the condition of the 49 people injured in the chaos. Xinhua reports that 24 people have been discharged from the hospital, while 25 are still under medical observation, including seven people with serious injuries and one in critical condition. 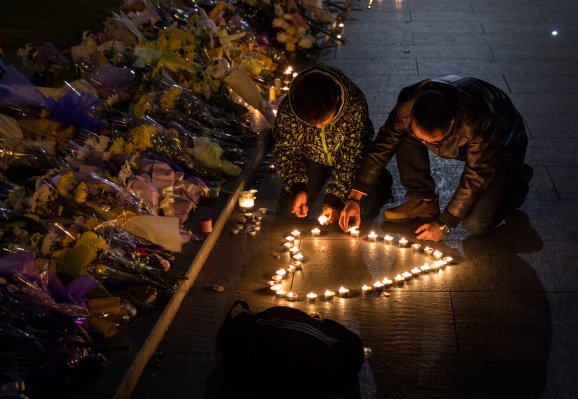