Obama Will Trumpet Economic Recovery in State of the Union Runup

Two weeks before he is set to deliver the State of the Union Address, President Barack Obama will embark on a tour to highlight the nation’s economic progress and preview his agenda for the coming year.

The White House said Obama will trumpet the recovery of the nation’s automotive sector in a speech in the Detroit area on Wednesday, just one day after the new Republican-controlled Congress holds its first meetings of 2015.

On Thursday, the President will point to a strengthening housing market in Phoenix, one of the areas most deeply impacted by the housing crisis. On Friday, Obama will join Vice President Joe Biden and Dr. Jill Biden in Tennessee to discuss education and job training. The speeches will look to connect Obama’s sometime unpopular actions taken early in his presidency to the current period of economic growth.

The President will also “announce policies that he will highlight in the State of the Union address to push us forward – specifically in the areas of helping more responsible Americans own a home, getting kids a college education, and creating new, good paying jobs,” White House spokesman Eric Schultz said in a statement from Hawaii, where the president has been vacationing for two weeks.

These areas of focus in the presidential budget are nothing new. They have been staples of the last three State of the Union addresses. But Obama’s proposals have been met with deaf ears by congressional Republicans, and significant progress now with the GOP controlling both chambers appears unlikely. But the issues remain potent political weapons for the Democratic president, who is looking to solidify his legacy in his final two years in office.

The presidential salesmanship comes as economic indicators have been increasingly positive in recent months, with GDP growing at a 5.0 percent annualized rate in the third quarter of 2013 and unemployment at its lowest levels since before the great recession. But the benefits of the recovery are still not being felt by many Americans, and confidence of the economy has been slow to improve.

Front-loading some of the policy announcements before the annual address to Congress breaks with recent practice, but is a reflection of both the administration’s desire to counter-message the new Republican majority and to capitalize on its momentum going into the new year. After lackluster 10 months defined by foreign policy crises and a bruising midterm election, the final two months of 2014 saw Obama make progress on both domestic and foreign fronts, including unilateral executive actions on immigration and an effort to normalize relations with Cuba after more than 50 years.

Obama will announce a mix of unilateral executive actions and legislative proposals for the new Congress, Schultz said. 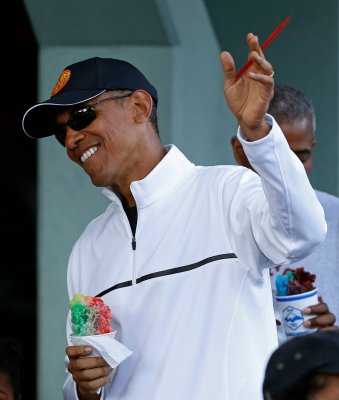 Obama Begins 2015 With Some 'Shave Ice'
Next Up: Editor's Pick