The Surprising Fact About History's Most Famous Stripper

Gypsy Rose Lee’s astronomical fame as a stripper is perhaps even more impressive considering one surprising aspect of her routine: the act that made her name didn’t actually feature getting completely naked.

She objected to “theatrical nudity,” according to her 1970 obituary in the New York Times, not on moral grounds, but because it made for bad theater.

But crowds didn’t flock to her shows just to see nudity. They came for her wit as much as her reputation for “disrobing gracefully.” When overeager members of the crowd urged her to show more, she disarmed them with humor, according to an NPR interview with the author Karen Abbott, who wrote a biography of the burlesque star.

She was born Rose Louise Hovick on this day, Jan. 9, in 1914 — at least according to the Times; different birthdates appear in different news outlets, probably because Hovick’s mother reportedly carried multiple birth certificates for her two young daughters, to get around child labor laws when they appeared in vaudeville acts. As a child, with an overbearing stage mother (the larger-than-life Momma Rose from the musical Gypsy, which was based on Hovick’s memoir of the same name) she was known as the shy, bookish one in the family. “Rose in those years was a pudgy, lonely girl who found solace between one-night stands in reading Shakespeare,” her obituary recounted. But Gypsy developed an undeniable talent for burlesque. She put the “tease” in striptease, with a slow, deliberate style that captivated her audiences.

“One of my grandmother’s cousins saw Gypsy perform,” Abbott told NPR. He reported back that the star “took a full 15 minutes to peel off a single glove — and that she was ‘so damn good at it that he gladly would have given her 15 more.’”

She also grew up to be similarly skilled, if less celebrated, as a writer. She applied her literary talents to her memoir and two murder mysteries, The G-String Murders and Mother Finds a Body, drawn from her life in the burlesque world.

TIME’s 1941 review of The G-String Murders sums up the storyline succinctly: “Two bitchy strip queens are murdered with their own G-strings.” While the plot may have been pulpy, the writing shone, according to the review, which described the novel in glowing terms that could have applied equally to Gypsy’s stage performances: “lurid, witty, and highly competent.”

Read the full book review, here in TIME’s archives: For the Publicity 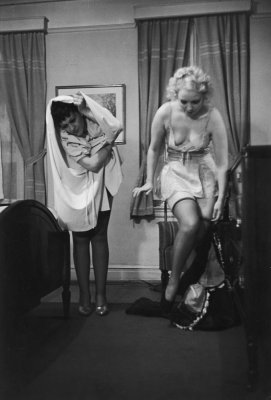 'How a Wife Should Undress': Dubious Advice From 1930s Strippers
Next Up: Editor's Pick