For the AirAsia Bereaved, the New Year Brings Nothing but Grief

The New Year festivities in Surabaya, Indonesia’s second largest city, are traditionally colorful and boisterous — but not this year. This is a city in shock and mourning, its inhabitants struggling to come to terms the loss of 162 lives in the AirAsia disaster.

When Singapore-bound AirAsia Flight QZ 8501 vanished from radar screens, 42 minutes after taking off from Surabaya’s Juanda International Airport on Sunday, there were prayers and tentative hopes. But the airing on live TV of graphic images of dead bodies floating in the Java Sea on Tuesday ensured, for the families of the victims, that New Year will henceforth be a time of grief and mourning.

In Surabaya, an official New Year’s Eve concert was hastily replaced with an interfaith prayer meeting. Nationally, President Joko Widodo urged Indonesians to be restrained in their commemoration of the New Year. The district head in Pangkalan Bun, the town in Indonesian Borneo close to where bodies and debris were found, banned music, fireworks and noisy parties out of respect for the dead.

“Like everyone else, we were shocked,” said Sunu Widyatmoko, CEO of Indonesia AirAsia. “We never thought that the first findings would be of lost ones. We thought we were going to find survivors.”

Seven bodies in total were recovered as of Wednesday night, one of which has been identified as a female, Hayati Lutfiah Hamid, according to Budiyono, chairman of the East Java police’s victim-identification team, who spoke to waiting media. But rough conditions and strong currents in the Java Sea have stirred up sediment at the crash site. Already murky waters have become even more opaque, hampering visibility for divers and making the task of recovery more difficult. Poor weather is likely to persist for the rest of the week, according to authorities.

At the airport on Wednesday evening, officials announced that the crisis center, where family members have been gathering, would be moved to the nearby hospital were incoming bodies will be sent for identification. At a press conference, AirAsia representatives also sought to clear up speculation and rumors that had surfaced since the plane disappeared from radar on Sunday.

AirAsia CEO Tony Fernandes said on Wednesday that the plane’s main fuselage had not been located by sonar, nor had a body wearing a life jacket been recovered, despite these being widely reported.

“There’s lots of rumors going around and, until we have official confirmation, what we’ve heard is all speculation,” Fernandes told reporters. “There is no sonar, nothing. There’s some visual identification, but nothing confirmed.”

Throughout Wednesday, men in uniform and mourners watched televised news reports at the crisis center, fueled on sips of coffee and bites of instant noodles from Styrofoam cups. The characteristic Indonesian aroma of clove cigarettes hung heavy in the air.

Dwi Prasetyo Yudo and his wife had traveled to the center at the beginning of the week from their nearby hometown of Malang to show support for their family friend of more than two decades, who lost his daughter on the flight. Local media reported that as many as 35 of the dead were from Malang, including a party of alumni from a Catholic high school traveling with their families.

As night fell, the couple slipped out of the center to visit the airport’s prayer room to gather with fellow Muslims. Dwi said his prayers on New Year’s Eve would be dedicated to “peace in Indonesia.”

Across Surabaya, vigils were held at places of worship to remember the passengers, most of whom were Indonesians of Chinese ethnicity, many of them Christian.

According to pastor Florida Rambu Bongi Roni, based on the names listed on the flight’s manifest, approximately 70% of the people on board Flight QZ 8501 were from Surabaya’s large Christian community.

At Gereja Kristen Indonesia (the Indonesian Christian Church), where Roni is a minister, dozens of mourners squeezed into wooden pews in their humble chapel for a special commemoration service, where they sang Presbyterian hymns, recited the Apostle’s Creed and lit candles in unison.

The church lost three members in the crash, all from the Soesilo Utomo family. The mother, father and son were aboard Flight QZ 8501; their teenage daughter is now an orphan.

“I didn’t have family on the Air Asia [flight], but I can feel what they feel,” said the minister.

During her impassioned sermon, Roni wiped tears from her eyes as she called on her congregation to be more kind in the coming year.

“Caring for others is number one for our lives,” she said. “The tragedy of Air Asia reminds us that we don’t know at what time we will die, so we must make our lives about caring for others and make people happy and full of joy.”

Surabaya resident Yuska Sahertian was among the dozens who attended the evening’s service. A university lecturer, she said at least 15 of her former students had boarded the ill-fated aircraft early Sunday morning.

As the clock approached midnight, approximately 35,000 people crammed into Graha Bethany Nginden, an evangelical megachurch on the outskirts of Surabaya, to both welcome the New Year and remember the nine members of their community who disappeared when the Air Asia jet crashed into the Java Sea.

Only hours before the service, Pastor Deddy Sutjahjo sat in the empty church and scrolled through Flight QZ 8501’s manifest, pausing to explain how he knew this passenger or who in the church was related to another, as he dabbed the tears from his eyes with a handkerchief and bit his quivering lip.

He explained that many of those who had loved ones on Flight QZ 8501 were still not ready to speak publicly about their losses. Some even appeared to be holding out hope. After all, only seven bodies had been recovered so far.

“We are still praying for them,” he said. 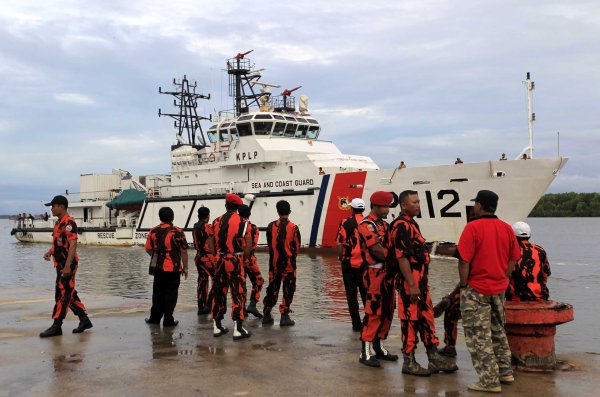 Sonar Hints at Plane's Fate
Next Up: Editor's Pick