“I speak tonight for the dignity of man and the destiny of democracy,” said Lyndon Johnson, in his nationally televised address to a joint session of Congress on March 15, 1965. “At times history and fate meet at a single time in a single place to shape a turning point in man’s unending search for freedom. So it was at Lexington and Concord. So it was a century ago at Appomattox. So it was last week in Selma, Alabama.”

The President was referring to the “Bloody Sunday” confrontation in Selma, Ala., on March 7, when Dallas County Sheriff Jim Clark and his deputies met about 600 peaceful marchers on the Edmund Pettus Bridge with nightsticks, tear gas and charging horses. The naked brutality of this assault — just nine days after the young, unarmed black Baptist minister Jimmie Lee Jackson had died from an Alabama State Trooper’s gunshot — spurred LBJ to bring the Voting Rights Act to Congress. A Texas Democrat who knew his party could lose the South for decades if he championed equal rights for blacks, Johnson nonetheless boldly declared, “There is no Negro problem. There is no Southern problem. There is no Northern problem. There is only an American problem.”

His comments reverberate eerily today, when police again can kill unarmed black men and face no legal punishment — and when the Voting Rights Act, which Johnson signed on August 6, 1965, with Martin Luther King Jr., Rosa Parks and John Lewis by his side, gets effectively defanged 48 years later by the Supreme Court. So Ava DuVernay’s Selma, a vivid retelling of the months leading up to the three historic marches from Selma to Birmingham, carries a message that has lost none of its heroic, tragic relevance. If not quite in quality then certainly in import and impact, this is the film of the year — of 1965 and perhaps of 2014.

The film, currently playing on 19 screens in New York and Los Angeles, opens in the rest of the country January 9 — the week before the Martin Luther King Jr. holiday weekend. This solid, expertly managed drama, with its stark images of good men standing up to entrenched government evil, has earned critical hosannahs and could be the breakout favorite among year-end contenders for the Academy Award.

With Oscar night falling on February 22, just two days before the 50th anniversary of Jimmie Lee Jackson’s death, Selma could be propelled to a Best Picture win as much by the Academy members’ political consciences as by the film’s undeniable power. It’s creepy even to speculate about this, but one more unjustified police killing of an unarmed black could assure the movie of an Oscar sweep: for Picture, for David Oyelowo as King in the Best Actor category and for DuVernay, who would become the first black woman chosen as Best Director.

Dr. King would appreciate that awful conundrum: that violence can be a goad to good. In Georgia, he had attempted voter-registration drives that, as NPR critic Bob Mondello noted, “received little media coverage because the authorities there had met nonviolent protests with nonviolence.” Alabama promised more fertile ground for telegenic confrontation. Its Governor, the pint-size pit bull George Wallace, had proclaimed, “Segregation now, segregation tomorrow and segregation forever!” (Would Wallace be rooting this year’s University of Alabama top-ranked football squad, dominated by black players?) And Jim Clark’s rambunctious police force was a good bet to be rough on pacifist marchers with dark faces. King, no less than the video newshound played by Jake Gyllenhaal in Nightcrawler, knew the dictum of editors in the nation’s press and TV news: If it bleeds, it leads.

King wasn’t a cynic or a sadist; he was a political realist. And Selma, from a cogent, concise script by the British screenwriter Paul Webb, is all about realpolitik in the service of social idealism. In his March 15 speech, Johnson said he had summoned the Special Session of Congress in response to “the cries of pain and the hymns and protests of oppressed people.” Yet his understanding of the urgent need for a Voting Rights Act was sown in secret meetings between the President (Tom Wilkinson) and the preacher. Johnson knew, from King’s August 1963 March on Washington, that the Rev. Dr. was not just the eloquent voice of the civil rights movement; he was, in showbiz terms, its director and impresario.

Selma shows King’s mastery at maneuvering and manipulating. He must woo Johnson — whose immediate priority is his War on Poverty, and who tells King, “This votin’ thing is gonna hafta wait” — even as he and his Southern Christian Leadership Conference cohort Rev. Ralph Abernathy (Colman Domingo) wage negotiations with the younger, more restless leaders of the Student Non-Violent Coordinating Committee, including John Lewis (Stephan James), who had been mounting challenges to Alabama’s racist restrictions on voting long before the SCLC came on the scene.

DuVernay, like King, came late to the Selma project. Michael Mann and Stephen Frears had considered directing Webb’s script. Lee Daniels (Precious) got so far as announcing his leading actors: Oyelowo as King and a gaudy supporting cast of Liam Neeson as LBJ, Hugh Jackman as Jim Clark and Cedric the Entertainer as Ralph Abernathy. When Daniels moved on to direct The Butler, Oyelowo recommended DuVernay, who had directed two low-budget films and worked on Precious as a publicity adviser, for the job. She worked on the script, sheared the budget to a bankable $20 million and impressively managed a huge cast with dozens of speaking roles and, in the scenes shot on Edmund Pettus Bridge, hundreds of extras. No less than King, or the current U.S. President, DuVernay proved herself a wizardly community organizer.

Not exactly a hagiography of King — whose life, works, oratory and death certainly deserve all reverence — Selma tiptoes around the delicate issue of the preacher’s infidelities. The movie traces the monitoring of King by the FBI and its boss J. Edgar Hoover (Dylan Baker), who calls him a “political and moral degenerate.” But it raises the widely documented charges of adultery only as slurs, concentrating instead on the symbiotic love of King and his wife Coretta (Carmen Ejogo). King does make one furtive late-night call to a woman: gospel thrush Mahalia Jackson (Ledisi Young), whom he asks to raise his troubled spirits by singing the spiritual “Precious Lord Take My Hand.” The fascinating chapter of King’s balancing act, of his sacred mission with his sexual appetites, will have to await another film — for, astonishingly, this is the first King biography made for the big screen.

Given that Dr. King’s quarreling children did not give DuVernay permission to quote their father’s speeches — recall that they charged more than $800,000 for King’s words to be chiseled into the monument statue on the National Mall — Oyelowo wisely didn’t try to mimic the soaring of King’s tremolo. This is a movie set not on great lawns but mostly in back rooms, where a forceful whisper can have more effect than a pulpit homily. Born in Oxford, England, to Nigerian parents, Oyelowo gives a warm, not fevered performance, and lends King a presence that makes everyone from LBJ to Selma’s most devout parishioner (Oprah Winfrey) feel the power of his argument, the singe of his soul.

If King had not been assassinated in 1968, just three years after the Selma marches, he would be 86 on January 16, the memorial holiday that Americans celebrate with extra shopping and skiing. What would he have to say, in majestic cadences that once called America to tolerance, about the wrongful deaths of young black men? In a way we know, because he said it all a half-century ago.

A movie like Selma should be a relic in a time capsule from 1965, a clue to how well we heeded King’s words and how far we have advanced. Instead it is a reminder that the “American problem” has yet to be solved.

An earlier version of this story misstated the route of the march. It was from Selma to Montgomery. 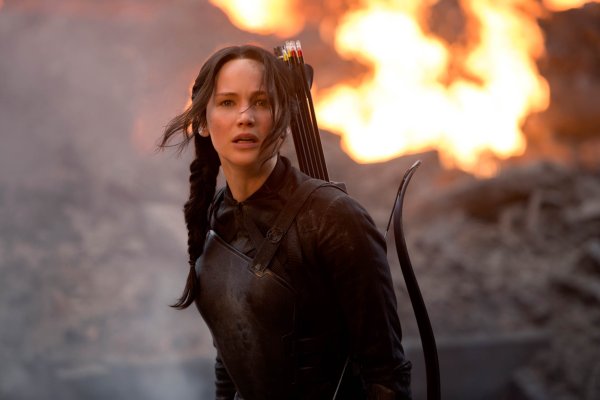 These Movies Made the Most Money in the U.S. in 2014
Next Up: Editor's Pick