Former Klansman and congressional candidate David Duke discusses his bid for the seat opened by Rep. Bob Livingston during NBC's ''Meet the Press'' on March 28, 1999 in Washington.
Richard Ellis—Getty Images
By Michael Scherer

David Duke, a former grand wizard of the Knights of the Ku Klux Klan, said Tuesday that he does not support, and would not vote for, Rep. Steve Scalise, the Republican majority whip, who is under fire for speaking in 2002 to a group that Duke founded.

“Even though I respect the guy, I think he is a pretty good family guy, I would not vote for him now,” Duke said on his daily radio show, which is broadcast online. “I would not vote for him next time he ran because specifically folks, he like so many other Congressmen, feel like they are forced to support the interests of Israel over the United States of America.”

Scalise admitted Monday that he spoke in 2002 to the European-American Unity and Rights Organization, or EURO, when he was serving as a Republican state legislator in suburban New Orleans. Scalise said he did not know of Duke’s affiliation with the group at the at the time, and condemns its ideology.

On his radio show, Duke described EURO Tuesday as a human rights group, focused not on white supremacy but on equal rights. He said representatives from a local sheriff office, and the American Red Cross also attendeded the meeting, which Duke addressed by remote from Moscow, where he was living at the time, with a speech that focused on his opposition to the Iraq war. “My speech was about the Iraq war,” Duke said, adding that thought at the time “that it was a war for Israel, the Richard Perles and the Paul Wolfowitzes of the world”—a reference to two Jewish advisers to President George W. Bush, who supported the Iraq war.

Duke, a former Republican state legislator who has run unsuccessfully several times for higher office, said he did not hear Scalise’s address to the group. “He came and actually just spoke to his local constituents about one of his tax bills, and they are trying to make it out like this is a big deal,” he said.

“I really believe that the Zio-globalists that control the American media, finance and government are leading us all to disaster, both African Americans, white Americans, all Americans,” he continued, returning to his central theme.

At another point in the broadcast, he condemned the “absolute filth, drugs and violence” promoted by the hip-hop star Nicki Minaj. “Why do people blame blacks like Minaj?” he asked, rhetorically. “Because Minaj wouldn’t be a pimple on somebody’s rear end except for the fact that she is promoted by the Jewish record producers and the media, the mass media, the powerful media, that promotes absolute degenerates like her.” 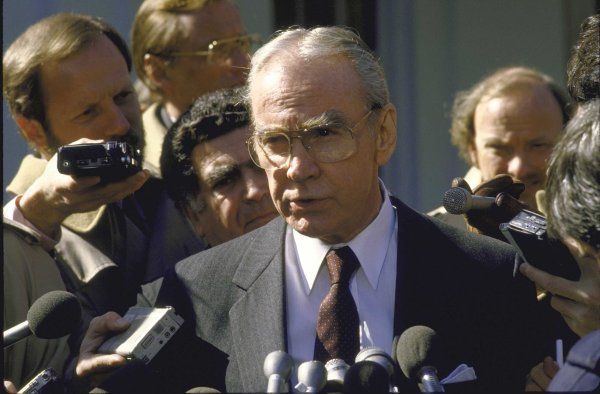 Here Are 6 Congressional Leaders Who Resigned Over Scandals
Next Up: Editor's Pick