NYPD Arrests Down 66% Since Officers’ Death

The NYPD confirmed a report that arrests have plummeted in the wake of the murder of two police officers in Brooklyn on Dec. 20.

The New York Post reported Tuesday that arrests fell 66% and citations for traffic violations fell 94% in the week starting Dec. 22 compared with the same period a year ago.

While crime statistics are publicly available, the NYPD has not yet posted figures for that week to its website. But a NYPD spokesperson confirmed to TIME that the figures in the article are accurate.

After a man shot and killed officers Rafael Ramos and Wenjian Liu and then himself on Dec. 20, union leaders have ordered police to take additional safety precautions that have contributed to the decline in police activity. The Post, citing anonymous “police sources,” says that some members of the police force have also actively reduced police activity in protest toward Mayor Bill de Blasio.

Union leaders — and the New York Post Editorial Board — have been highly critical of the Mayor, who they say sided with protesters instead of the police during protests earlier this month against a grand jury’s decision not to indict an officer in the death of Eric Garner.

Some members of the police have also publicly defied the Mayor by turning their backs when he has spoken on multiple occasions. Commissioner Bill Bratton said in a recent interview on NBC’s Meet the Press that he did not support officers turning their backs toward a screen with de Blasio speaking during the funeral of slain policeman Rafael Ramos on Saturday.

De Blasio plans to meet with NYPD union leaders on Tuesday to calm tensions and improve relations between the police force and City Hall. 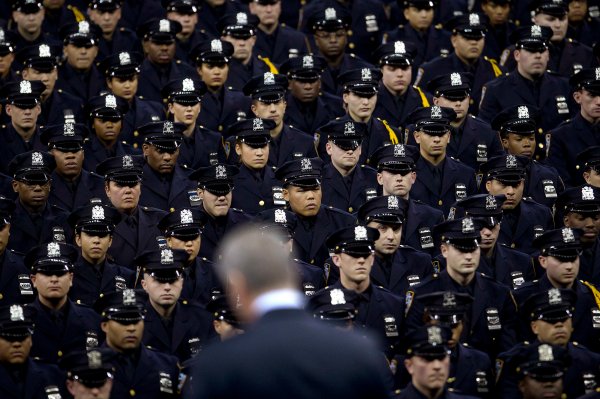 NYC Mayor to Meet With NYPD Union Leaders
Next Up: Editor's Pick