A scene from 'Full House,' which was shuttered 20 years ago
ABC Photo Archives / Getty Images
By Lily Rothman

Does 1995 feel like just yesterday or a lifetime ago? No matter how you feel about it, these events are about to hit their 20th anniversaries:

The World Trade Organization was formed (Jan. 1): After much wrangling between Bob Dole and Bill Clinton (then Republican Senate leader and President, respectively), the U.S. agreed to sign the General Agreement on Tariffs and Trade treaty. The WTO was created by GATT to monitor international trade decisions — and in 1995 it replaced the treaty as a regulator of trade.

North America’s largest airport opened (Feb. 28): The new Denver International Airport airport was (and remains) the largest in North America, though it opened much later than planned. The airport now hosts more than 50 million passengers a year and numerous conspiracy theories.

Read the results of TIME’s 1995 polling on the new airport, here in the TIME Vault: Vox Pop

Selena was murdered (Mar. 31): The young singer was a Grammy-winning hit when she was shot to death. After a nine-hour standoff, the former head of her fan club was arrested. About three years later, Jennifer Lopez would play her in a biopic.

Read TIME’s original coverage of the murder, here in the TIME Vault: Death of a Rising Star

The Oklahoma City Bombing took place (Apr. 19): In an attack on a government building in Oklahoma City, 168 people were killed — including more than a dozen children at a day-care center at the site — and many more were injured. It was then the deadliest terrorist bombing in the nation’s history. One of the bombers, Timothy McVeigh, was executed about six years later.

Read TIME’s original special issue about the bombing, here in the TIME Vault: The Face of Terror

The last episode of Full House aired (May 23): After eight seasons, the world bid bye-bye to Danny Tanner and his three kids and various hangers-on. Other TV milestones that year include the premieres of JAG and Mr. Show with Bob and David, and the finales of Blossom and Where in the World is Carmen Sandiego?

Read TIME’s take on family sitcoms of the 1990s, here in the TIME Vault: Where Fathers and Mothers Know Best

Christopher Reeve was paralyzed (May 27): Reeve, who played Superman on film, was thrown from his horse and broke two vertebrae in his neck. He was paralyzed below the neck and relied on a respirator to breathe until his death in 2004.

Read TIME’s original coverage of the accident, here in the TIME Vault: Hospitalized

South Africa won the Rugby World Cup (June 24): South Africa beat New Zealand 15-12 to win the World Cup — and a symbolic victory for the post-apartheid nation. The events surrounding the win were later portrayed in the movie Invictus.

Hugh Grant was arrested for lewd conduct (June 27): Grant was caught with a prostitute named Divine Brown on Sunset Strip in Los Angeles, engaged in what TIME’s Richard Corliss called “felonious fellatious activity.” The arrest marred his charming, bumbling, Four Weddings and a Funeral persona — at least temporarily — and made the actor a household name.

The Grateful Dead played their last concert (July 9): It was a bad year for Deadheads. Earlier that summer, over 100 fans were injured when a deck at a concert site collapsed, and another concert’s cancellation led to rioting. Then, mere weeks after their final show in Chicago, lead guitarist Jerry Garcia died of heart failure. The band would announce their official break-up later that year.

Read TIME’s obituary for Garcia, here in the TIME Vault: The Trip Ends

The Srebrenica Massacre occurred (July 11): The Srebrenica enclave was supposed to be a “safe area” in the midst of Bosnian warfare, but ethnic-cleansing leader Ratko Mladic led Serbian forces against the Muslims living there nonetheless. The massacre was later ruled a genocide by the The Hague.

Read TIME’s original coverage of the massacre, here in the TIME Vault: Tears and Terrors

eBay went live (Sept. 3): Then called AuctionWeb, the site was started by Pierre Omidyar to help his then-fiancée find Pez dispensers for her collection. Other tech milestones of that year were the launch of IMDb and the release of Windows 95 (d’uh).

Operation Desert Storm officially ended (Nov. 30): Though a cease-fire had been declared years earlier for the Gulf War, the conflict that arose when Iraq invaded Kuwait, the operation didn’t officially end until 1995.

Read TIME’s take on the foreign-policy implication of Desert Storm, here in the TIME Vault: What Price Glory?

The final “Calvin and Hobbes” strip was published (Dec. 31): “I believe I’ve done what I can do within the constraints of daily deadlines and small panels,” Bill Watterson told newspaper editors that year, shortly before he brought the story of a boy and his tiger to a close.

Read TIME’s original announcement that the comic was ending, here in the TIME Vault: Seen & Heard

Jagged Little Pill was the album of the year: At the Grammy Awards for that year (which, yes, took place in 1996) Alanis Morissette scored for her June 1995 release. She also won Best Rock Song for “You Oughta Know.” Other notable tunes of 1995 include “Gangsta’s Paradise,” “Waterfalls,” “Creep” and “Kiss From a Rose.”

Read TIME’s profile of Alanis Morissette, here in the TIME Vault: You Oughta Know Her 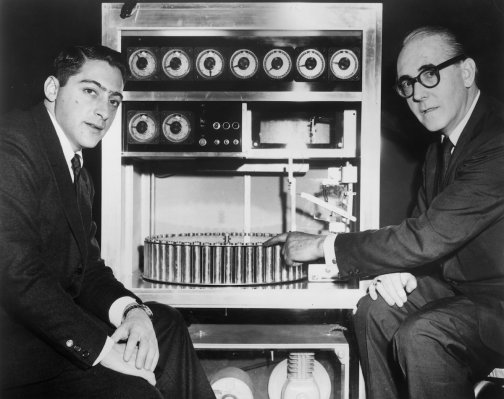 7 of the Craziest Predictions for the Future, From the Past
Next Up: Editor's Pick