Obama: Racial Divisions Have 'Surfaced in a Way That Probably Is Healthy'

U.S. President Barack Obama speaks to members of the media during his last news conference of the year in the James Brady Press Briefing Room of the White House in Washington on Dec. 19, 2014.
Chip Somodevilla—Getty Images
By Jack Linshi

President Obama believes the racial tensions over the police shootings of unarmed black Americans have “surfaced in a way that probably is healthy,” he said in a recent interview with NPR.

“I think that the fact that there’s a conversation about [racial divides and police mistrust], and that there are tools out there that we know can make a difference in bridging those gaps of understanding and mistrust, should make us optimistic,” Obama said in the interview, which was released Monday, but recorded before the Obama family left for their Hawaii vacation.

Last week, two NYPD officers were killed in an ambush by a civilian, an event which spurred additional dialogue regarding communities’ mistrust of police.

Obama also drew attention to the rise in cellphone use to document and hold police accountable for their actions, referring to the cellphone video that showed Garner in a chokehold. He added that while the Garner and Brown cases have exposed racial tensions, he believes Americans’ day-to-day interactions are less racially divided today than in years past.

“It’s understandable the polls might say, you know, that race relations have gotten worse — because when it’s in the news and you see something like Ferguson or the Garner case in New York, then it attracts attention,” he said. “But I assure you, from the perspective of African-Americans or Latinos in poor communities who have been dealing with this all their lives, they wouldn’t suggest somehow that it’s worse now than it was 10, 15 or 20 years ago.”

Most Popular on TIME
1
What Martin Luther King Jr Really Thought About Riots
2
When Rioting Is the Answer
3
‘We Do This for the Living.’ Inside New York’s Citywide Effort to Bury Its Dead 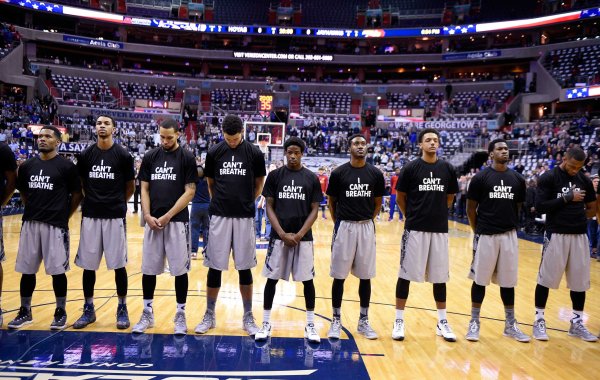