Everything We Know About the Missing AirAsia Flight QZ 8501

In the third Malaysian-linked aviation disaster this year, an AirAsia plane traveling from Indonesia to Singapore disappeared early Sunday over the Java Sea. Officials indicate that it probably crashed into the ocean, and although possible wreckage has already been spotted, nothing has yet been confirmed.

AirAsia Flight QZ 8501 departed Surabaya, Indonesia, bound for Singapore at 5.35 a.m. on Sunday, but lost contact with air traffic control after 42 minutes. The flight path was almost entirely over water.

The pilot asked for clearance to change altitude and direction minutes before contact was lost in order to avoid heavy cloud. This request was reportedly denied.

There were 162 people on board including seven crew. The passengers were mainly Indonesian, but there was also a Singaporean, a Malaysian and a British citizen on the manifest. The copilot was French.

How are search and rescue efforts progressing?

Searchers set out by air and sea soon after the plane did not arrive as planned at 8.30 a.m. at Singapore’s Changi Airport. However, bucketing rain and poor visibility hampered their efforts.

The Java Sea is a major shipping lane, well mapped and comparatively shallow. But strong westerly currents may have shifted any debris from where the last radar contact was received. Efforts are focusing near Belitung island off eastern Sumatra in the Java Sea.

The procedure will be to lay a grid over where the last radar contact was received and expand the search systematically from that point. “If it’s in the water, something will turn up,” Captain Desmond Ross, an Australia-based aviation expert, tells TIME.

What may have caused the plane to go down?

Current theories relate to bad weather in the area, especially since Captain Iriyanto — who, like many Indonesians, only uses one name — had asked for permission to ascend from 32,000 ft. to 38,000 ft. to avoid cloud.

Meteorologists say cloud tops may have reached over 50,000 ft., though, and satellite imagery shows a huge storm that quickly disappeared, indicating a massive amount of rainfall in a short period.

There is speculation that flying through thunderstorms at high altitude could have caused ice to form on instruments, giving erroneous readings and affecting navigation. Similar problems are thought responsible for the ditching in the Atlantic of Air France Flight 447 in June 2009, that killed all 228 people aboard.

However, there are problems with this theory. Firstly, cockpit recordings indicate the Air France crew hadn’t been trained for such circumstances. But ever since, Airbus has put new training in place so that all pilots who fly their aircraft know how to deal with these occurrences. “It’s a new regime,” says Ross.

What’s more, the Air France flight was in the dead of night and so the crew only had instruments to rely on. “I don’t even think they had a horizon,” says Ross. It is unlikely such a tragedy would have occurred in daylight conditions such as QZ 8501 experienced.

Essentially, says Ross, “Weather doesn’t cause accidents. Accidents are caused by poor decision-making or other things like malfunctions.” What’s more, just 10% of fatal crashes from 2004 through 2013 occurred while a plane was at cruise elevation, according to a safety study published by Boeing in August. (Almost half were at approach and landing.)

Monsoon conditions over the Java Sea are well known, and lightning strikes or turbulence do not generally cause planes to come down. If the weather was sufficiently bad to have caused a crash, then this would have been known prior to or early in the flight. At the very least, the plane should have either flown around the storm or turned around and landed back at Surabaya.

A320-200 pilots can generally see a thunderstorm forming from over 100 miles away, and commercial planes sometimes detour their flightpaths even more than that again to avoid such problems.

Did the pilot indicate the plane was in trouble?

No distress call was reported, neither from the radio nor the transponder. The last contact from the cockpit was at 6:12 a.m. local time when the pilot “asked to avoid clouds by turning left and going higher to 38,000 feet [11,600 meters],” say officials. Radar contact was lost three minutes later.

The lack of the distress call is not entirely surprising, as pilots are trained to focus first on dealing with any emergency and to communicate only if and when free to do so. However, says Ross,“I’m having a bit of a problem that we haven’t heard anything from emergency locator transmitters or anything else.”

What about the plane?

The Airbus A320-200 used for QZ 8501 had two pilots, four flight attendants and one engineer on board. The single-aisle, twin-engine jetliner was delivered in 2008 and had last had scheduled maintenance on Nov. 16. The A320, which entered service in 1988, has seen a total of 11,163 orders with 6,331 deliveries to date to more than 300 operators globally. (AirAsia is the largest commercial customer of the A320, with 184 orders and 157 deliveries.) It is a true industry workhorse specializing in short-hall flights under five hours.

According the Aviation Safety Network accident database, there have been 54 incidents involving the A320. The most deadly was the crash of a TAM Linhas Aereas plane in 2007 that killed all 187 on board, plus a further dozen people on the ground, after the plane careered off the runway during landing in Brazil’s Sao Paulo airport in wet conditions.

The A320 was also what pilot Chesley Sullenberger was flying in 2009 when he miraculously landed on the Hudson River in New York after hitting a flock of geese. Everyone on board survived.

What is the reputation of AirAsia?

The plane was owned and operated by Indonesia AirAsia, which is 49% owned by AirAsia — a low-cost airline based in Malaysia that primarily serves Southeast Asia but has begun expanding aggressively in China and India and previously has flown to European and U.S. destinations.

Charismatic CEO Tony Fernandes, who also hosts the Asian version of The Apprentice, took over the airline in 2001 when it had just two planes, and has overseen meteoric growth. Today, AirAsia flies to 88 destinations and has a spotless safety record.

“AirAsia are considered to be quite well funded and apparently Tony Fernandes is a stickler for safety and good maintenance,” says Ross. “There are no black marks against them at this point in time.”

Indonesia AirAsia likewise has a good reputation for safety.

What about the pilots?

Captain Iriyanto boasted a total of 6,100 flying hours. First Officer Remi Emmanuel Plesel, 45, a French National, had 2,275 flying hours. Iriyanto’s nephew Doni told Indonesian news portal Detik.com that his uncle was a good man who wanted to help people. “He is a very caring person,” he said, according to the Malaysian Insider. “If there is a sick relative who needed help and even money, my uncle would be there.”

So what is up with Malaysian air carriers?

Following the disappearance of Malaysia Airlines Flight MH370 in March and the shooting down of MH37 over Ukraine in July, this appears to be the third major aviation disaster connected with Malaysia this year. But it could just be a horrifying coincidence. All three incidents are sufficiently unique to rule out any kind of systemic flaw across the national, or regional, aviation industry.

Read next: Objects Spotted That May Be Related to Missing AirAsia Jet, Say Officials 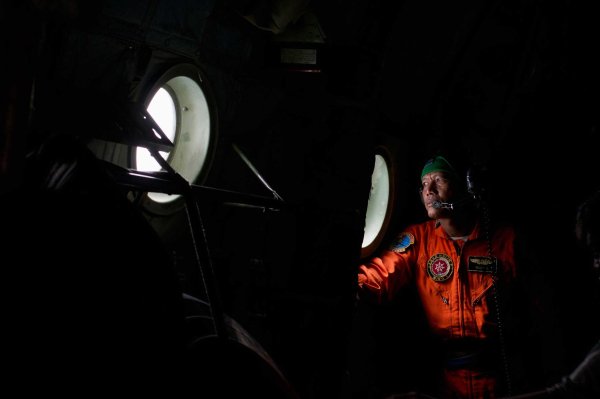 Objects Spotted That May Be Related to Missing AirAsia Jet, Say Officials
Next Up: Editor's Pick