AirAsia Plane Missing With 162 Aboard

Flight QZ 8501 was due to land at Singapore’s Changi Airport at 8:30 a.m. local time after departing from Surabaya, Indonesia. But air-traffic controllers lost contact with the plane in Indonesian airspace at about 7:24 a.m., officials said.

“We don’t dare to presume what has happened except that it has lost contact,” Djoko Murjatmodjo, Indonesia’s acting director general of transportation, told reporters.

Some 10 hours after the aircraft vanished, and with darkness having set in, no sign of the errant Airbus A320-200 had been found. Wet weather also hampered search efforts. The search was set to resume at 6 a.m. Monday.

The plane had 162 people on board, including seven crew and 16 children. No distress signal had been sent.

The six-year-old aircraft had requested to deviate from its submitted flight plan because of bad weather, before communication was lost with Indonesian air-traffic control, AirAsia said in a statement. The disappearance comes just nine months after Malaysia Airlines Flight 370 vanished en route from Kuala Lumpur to Beijing with 239 people aboard. That plane has yet to be found, in a mystery that captivated the world for months.

“The weather was not good — it was bad — at the estimated location the plane lost contact. We just received a weather report from the national meteorological, geophysics and climatology agency,” Hadi said.

Earth Networks, a firm that monitors weather conditions across the globe, said there had been a number of lightning strikes between 6:09 a.m. and 6:20 a.m. close to where Flight QZ 8501 was supposed to fly, the New York Times reports.

Flying into a thunderstorm at high altitude may cause icing on control surfaces that freeze corrective actions by pilots, experts say, thus spurring aggressive aircraft maneuvers.

Indonesian air-force spokesman Hadi Tjahjanto said three aircraft, including a surveillance plane, had been dispatched to the location where contact was lost. Singapore’s air force and navy were also scouring the region with two C-130 planes, the Associated Press reports.

“I am shocked to hear the news, and I am very worried that the plane might have crashed,” a 45-year-old woman with six family members on the plane told Agence France-Presse at Changi Airport. “They have always flown with AirAsia and there was no problem.”

According to Mike Daniel, a Singapore-based aviation expert with more than three decades experience with the U.S. Federation Aviation Administration, planes commonly change altitude and routes to avoid inclement weather. “That’s what you expect pilots to do,” he tells TIME.

However, Daniel says, “Indonesia is not known for having the best radar coverage and weather radar coverage — they need to update it for both the airports and routes.”

Similarly to Malaysia Airlines Flight 370, the AirAsia flight’s operator is supposed to have constant supervision and vigilance on the location of its aircraft. “One of the first things the authorities have to do is confirm with the airline where the aircraft is thought to be,” Daniel says.

This information is crucial for search-and-rescue operations, for which the first critical day has now passed.

Flight-tracking website Flightradar24 said Flight QZ 8501 was flying at typical cruising altitude of 32,000 ft. (9,700 m) when its signal was lost. This is unusual as planes most commonly get into trouble during takeoff or landing.

And so initial information, Daniel says, indicates the possibility of a “high-altitude flight upset due to bad weather and high level of cloud formation.”

The plane’s captain had a total of 6,100 flying hours and the first officer a total of 2,275 flying hours, AirAsia said. The aircraft had undergone its last scheduled maintenance on Nov. 16.

The vast majority of the 155 people on board were Indonesian. There were also six foreign passengers — three South Koreans, including an infant, and one passenger each from Singapore, Malaysia and the U.K. The co-pilot was French. Sixteen children were listed on the flight’s manifest.

The loss of Flight QZ 8501 is the third major aviation disaster connected with Malaysia in less than a year, following the disappearance of Flight 370 and then the apparent shooting down of Flight 37 over Ukraine in July, allegedly by pro-Russian separatists.

But while AirAsia is a Malaysia-based company, its air-operator certificate was issued by Indonesia. (AirAsia Indonesia was until 2005 known as Air Wagon International, and Malaysian AirAsia owns just 49% owing to Indonesian restrictions on foreign-owned carriers.) This means that under International Civil Aviation Organization protocols, Indonesia is responsible for the search-and-rescue efforts and subsequent accident investigation.​

White House spokesperson Eric Schultz said early Sunday that President Barack Obama was following the plane’s disappearance. “The President has been briefed on AirAsia Flight 8501 and White House officials will continue to monitor the situation,” he said.

On Sunday, Secretary of State John Kerry said, “Our hearts and hopes are with the passengers and families of AirAsia QZ8501.”

AirAsia has dominated budget aviation across Southeast Asia for over a decade, and until Sunday had never lost a plane.

AirAsia CEO Tony Fernandes set off for Surabaya on Sunday afternoon. He also changed his personal and the company’s many social-media profiles to a somber monochrome from their trademark red. 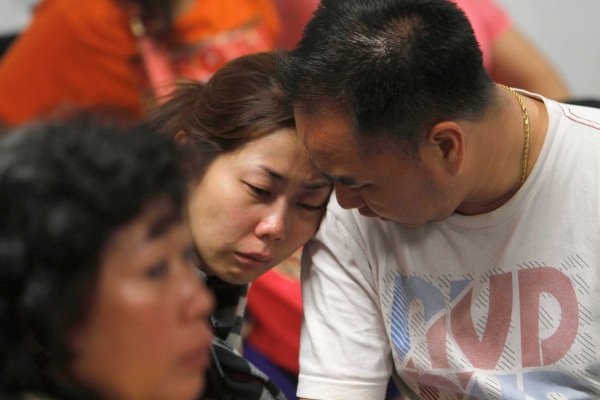 Everything You Should Know About AirAsia
Next Up: Editor's Pick