REVIEW: Into the Woods: A Disney Musical for Adults of All Ages

What took Hollywood so long to make a movie of Stephen Sondheim and James Lapine’s 1987 Broadway musical Into the Woods? In the early ’90s, director Penny Marshall staged a reading (and singing) of a prospective film version with Robin Williams as the Baker, Goldie Hawn as the Baker’s Wife, Cher as the Witch and Steve Martin as the Wolf. Lapine approached the Disney studio, then in its cartoon renaissance with Broadway-influenced musical hits like Aladdin and The Lion King, about turning his show into an animated feature.

Lovely ideas both, and nothing came of them. This fairy-tale epic had to wait ’til now to find its Prince Charming in Rob Marshall, whose 2002 Chicago is the only film musical since Oliver! in 1969 to win the Best Picture Oscar. Marshall also directed the fourth episode in Disney’s Pirates of the Caribbean franchise: a scurvy snooze, to be sure, but a billion-dollar grosser at the worldwide box office. So the studio entrusted him to find a balance between what the mass audience expects from a Disney musical fantasy — rated a kid-friendly PG — and what Into the Woods actually is: a clever mashup of familiar fables that packs a sour Freudian twist into a score without any breakout hummable songs. (That’s the real reason it took 27 years for the show to come to the big screen.) The result is a smart, appealing, upside-down children’s story for adults of all ages.

“It’s a little bit of The Avengers,” said Disney distribution chief Dave Hollis, making a wishful analogy to the studio’s all-time top grossing movie, “in its use of popular fairy tale characters.” Here, Jack (Daniel Huttlestone) upsets his mother (Tracey Ullman) by selling the family cow for a handful of magic beans; Red Riding Hood (Lilla Crawford) tangles with the Wolf (Johnny Depp); Rapunzel (Mackenzie Mauzy) is freed from her captor the Witch (Meryl Streep) by a dashing Prince (Billy Magnussen); and Cinderella (Anna Kendrick) confounds her wicked stepmother (Christine Baranski) to get to the ball where her designated Prince (Chris Pine) awaits to make her dreams, or maybe his, come true.

Binding these stories is one in which the Witch promises good tidings to a Baker (James Corden) and his Wife (Emily Blunt) if they bring her artifacts from the other four: “The cow as white as milk, the cape as red as blood, the hair as yellow as corn, the slipper as pure as gold.” They make good on their quest, the rest get their hearts’ desire, and that’s when the trouble starts.

You know the fairy-tale drill, especially from the Disney versions: the heroines endure awful stuff in rites of passage that lead to a joyous resolution of, usually, marriage to a prince. Into the Woods follows that template, then asks what happens after Happy Ever After? Dark doings: climate change creepier than the “blight” in Interstellar, a reign of terror from a vengeful Giantess who blends the less agreeable aspects of Medea and Godzilla and, worst of all, sieges of marital ennui inflicted on Cinderella, Rapunzel and their handsome husbands.

This harsh break in tone, from Happy to After, can work fine in the theater, where audiences have an intermission to consider what’s happened and prepare for what’s next. (Sondheim and Lapine used the same format in their 1984 musical Sunday in the Park With George: Act I portraying the painter Georges Seurat in the 1880s, Act II set a century later and focusing on the frustrations of a lesser artist named George.) The patrons for this sort of show are adults, mostly, who can afford $100-plus tickets and are expected to be able to absorb the switching of emotional gears.

But Hollywood movies are meant to satisfy expectations, not subvert them. And for a Disney mainstream audience packed with kids, the challenge of consuming a complex story and its jaundiced sequel in one sitting might prove confusing or depressing. The so-so B rating for Into the Woods in CinemaScore’s survey of early attendees — as opposed to a glittering A-minus for another Christmas Day opening, Angelina Jolie’s forthrightly inspirational war movie Unbroken — indicates that many viewers thought they were getting Frozen and instead felt frozen out.

No surprise here. Hollywood has always seen Sondheim as a caviar brand unsuitable for a popcorn industry. Into the Woods is only the fourth of the 13 musicals for which he’s written the lyrics and music to be made into a movie. (The first three: A Funny Thing Happened on the Way to the Forum, his only knockabout musical comedy, filmed in 1966; A Little Night Music, with its breakout song “Send in the Clowns,” in 1977; and Sweeney Todd: The Demon Barber of Fleet Street, starring Depp and directed by Tim Burton, in 2007.) On Broadway, they love Sondheim’s old shows, which are constantly revived, but not his later work; he hasn’t had a new show staged there since Passion, 20 years ago. Still sturdy and active at 84, he’s like an aging rock star whose fans want him to play nothing but the greatest hits of his youth.

This Sondheim admirer would like nothing more than for a new generation to discover him through Disney’s Into the Woods. (The $27 million it earned in its first two days of release is a welcome sign, whatever the disappointing CinemaScore.) Lapine, who wrote the movie’s script, reduces the number of violent deaths and grievous adulteries in his original, but he and Marshall do an admirable job translating the material into a real movie, with a gnarly forest and the measured use of special effects: the crows that help Cinderella pick hop breadcrumbs, the Giantess (Frances de la Tour) stomping mournfully through the forest.

The director has also coaxed winning, assured turns from his cast. Yes, the kids — Jack and Red Riding Hood — are bratty, and the male characters variously vain, weak or outrageously predatory. (As the Wolf, Depp slavers like a lupine gigolo, then makes a quick exit.) Even within these narrow confines, Pine and Magnussen make splendid popinjays in the princes’ comic duet “Agony.”

On stage or on film, Into the Woods is a showcase for the ladies. Kendrick, who at 12 earned a Tony nomination as Dinah in the 1998 Broadway production of Cole Porter’s High Society, gives full comic poise and import to Cinderella’s wavering desire to be a prince’s bride in “On the Steps of the Palace.” Ullman, a prime dazzler in the recent Encores! updating of The Band Wagon, makes a rich meal of her small part. Baranski is a deliciously malicious stepmother, flanked by Tammy Blanchard and the always ripely funny Lucy Punch as her daughters. Spitting out insults and swanning about in their gaudy frocks, they could be the Grimm Kardashians.

In this ensemble piece, the plum roles are for those playing the Witch and the Baker’s Wife: Bernadette Peters and Joanna Gleason in the 1987 original, Vanessa Williams and Kerry O’Malley in the 2002 Broadway revival and, best of all, Donna Murphy and Amy Adams in a miraculous staging two years ago outdoors in Central Park. At 65, Streep can be utterly convincing as both the crone Witch and the youngish stunner she becomes when the curse is lifted. She gives an excellent reading of the show’s most plangent and cautionary ballad, “Children Will Listen.”

As for Blunt: that she’s ravishing is no secret, but who knew she could sing with such precision and zeal? A figure of both goodness and goodness, the Baker’s Wife covets Jack’s beans in the song “Maybe They’re Magic.” When Blunt is onscreen, these woods are alive with the magic of a fractured fairy tale that wise parents might tell to a sophisticated child — a parable of grownup wonder and angst. 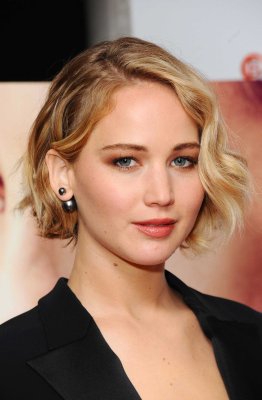 Jennifer Lawrence Was 2014's Top-Grossing Actor
Next Up: Editor's Pick