You Can Watch The Interview Here

Sony Pictures will release its beleaguered Seth Rogen/James Franco comedy The Interview on several streaming sites Wednesday afternoon, in a move that sidesteps concerns about online threats made against theaters that show the film.

The Interview will be available for digital rental or purchase on Google Play, YouTube, Xbox and seetheinterview.com starting at 1 p.m. ET Wednesday. It will cost $5.99 to rent or $14.99 to purchase, both in high-definition.

The move marks another turn in Sony’s handling of the film’s release. Sony Pictures scrapped a widespread theatrical release of The Interview earlier this month after several major theater chains backed out in the wake of threats against the movie. Those messages were believed to have come from the same group responsible for a massive cyberattack against Sony Pictures, which the Federal Bureau of Investigation has linked to North Korea. (Some cybersecurity experts remain unconvinced of that link.)

Sony’s first backtrack came Tuesday, when small theaters across the country said they would go ahead with plans to show The Interview on its planned Christmas Day release date. At this point, only a few hundred theaters are planning on showing the film, as opposed to thousands that were originally planning to screen the movie. Offering The Interview online could help Sony reduce losses from such a dramatic cut in the number of theaters showing the movie.

The real winners here, though, could be YouTube and the other streaming services. It’s extremely rare to offer a simultaneous in-theater/streaming release of such a major film. Americans are already going to movie theaters less often, opting for the often cheaper experience of staying in and watching videos online or on demand instead.

READ NEXT 22 Movies That Are Being Turned Into TV Shows 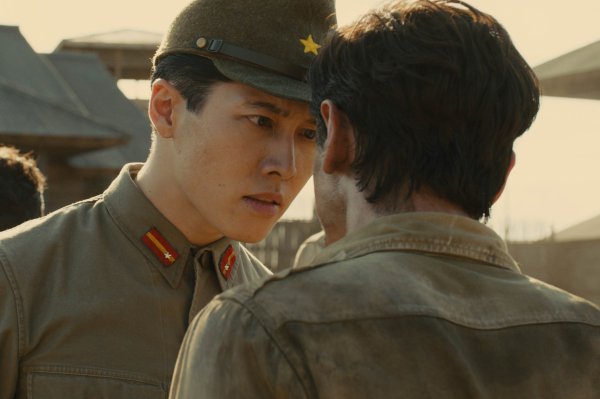 The True Story Behind Angelina Jolie's Unbroken
Next Up: Editor's Pick