Although only a handful of people have seen The Interview, it’s currently one of the highest-rated movies on IMDB—sitting pretty with a perfect 10 tallied from 36,624 votes. That’s better than IMDB‘s number one film, The Shawshank Redemption, which only has a 9.2. It’s especially good for a movie we can safely assume 36,624 people haven’t actually watched. So, who’s behind this latest wrinkle in The Interview saga?

According to Motherboard, it’s all thanks to 4chan, the message board that often functions as the Internet’s collective id. An anonymous user (just about everyone on chan boards is anonymous; that’s kind of the point) started a thread encouraging the internet to raid The Interview’s IMDB page and inflate its score as a sort of protest, a resounding middle finger to those who would prevent the movie from being screened.

While an obviously inflated IMDB rating will ultimately do little to get the film seen, creative heavyweights have been stepping up all week to offer alternative screening options, should Sony allow the film to be released. From the likes of Salman Rushdie and Neil Gaiman signing a letter from the PEN American Center, to George R.R. Martin’s privately owned theater and theArt House Convergence collective of theater owners, there’s no shortage of people willing to help Sony make good on its promise to distribute The Interview. There’s even a Congressman offering to screen the film on Capitol Hill—who would’ve seen thatcoming? (Update: Word just broke that Sony has authorized two theaters, the Alamo Drafthouse in Austin and the Plaza Atlanta in Georgia, to show the film on Christmas Day—its original release date.)

While we wait to see if Sony will release the film widely, there’s also this: a live reading of the script, featuring performers from the Upright Citizen’s Brigade, for those who happen to live in New York City. That performance probably won’t have an IMDB page, though. 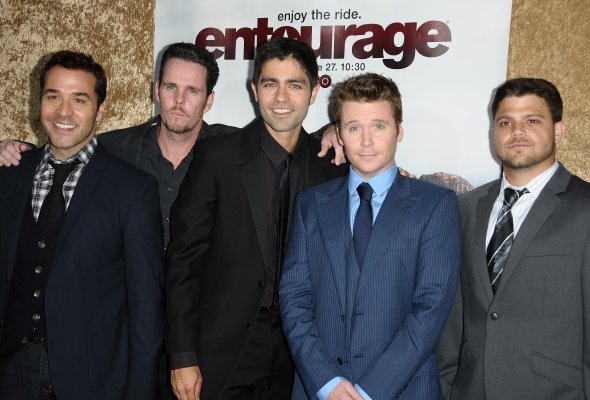 Watch the First Trailer for the Entourage Movie
Next Up: Editor's Pick