New York City Mayor Bill de Blasio urged New Yorkers on Monday to “put aside political debates, put aside protests” in the wake of the fatal shooting of two police officers while sitting in their patrol car — but hours later, activist groups had already vowed to defy the mayor’s call for a temporary cessation of demonstrations.

De Blasio took the lectern at the Police Athletic League December Luncheon on Monday and said that he had recently returned from consoling the officers’ families, whom he said were suffering an “unspeakable pain.”

“Let’s see them through these funerals,” de Blasio said, “then debate can begin again, but until that time it is our obligation to respect them.”

Officials said the funeral service for Officer Rafael Ramos was scheduled for Saturday at 10 a.m., while funeral arrangements were still under way for Officer Wenjian Liu, whose extended family in China was securing travel visas with U.S. immigration officials.

De Blasio also called the shooting a moment for the city to “take stock,” after weeks of demonstrations against the decision by a New York grand jury not to indict a police officer in the death of Staten Island resident Eric Garner, who lost his life after an aggressive arrest. “Put aside political debates, put aside protests, put aside all of the things that we will talk about in due time,” he said.

But at least one activist group, Act Now to Stop War and End Racism (ANSWER), rejected de Blasio’s call to temporarily halt protests and said it would go ahead with a march planned for Dec. 23. “The mayor’s call for a suspension of democracy and the exercise of free speech rights in the face of ongoing injustice is outrageous,” it said in a statement.

Other protest organizers also decried the mayor’s call for a halt to protests. “Those exercising their First Amendment rights to secure a justice system that works for ALL are being thrown under the bus by police departments and their union leaders who want to skirt their responsibility to our communities,” read an open letter drafted by members of Ferguson Action and co-signed by more than a dozen grassroots organizations.

The call for calm came as the mayor faced a growing backlash from New York City police, some of whom have publicly criticized his support for demonstrations. Patrick Lynch of the Patrolman’s Benevolent Association said de Blasio had “blood” on his hands.

The assailant, Ismaaiyl Brinsley, reportedly posted threats of exacting “revenge” for the killing of Eric Garner on social media.

Police commissioner William Bratton released new details about Brinsley at a separate press conference Monday afternoon, saying that Brinsley appeared to be acting alone and had posted 119 images of “self-despair” and “antigovernment” messages to his Instagram account prior to the shooting.

De Blasio urged protesters to remain vigilant against potentially violent actors. “If anyone of bad intent threatens a police officer, on the Internet or anywhere else, anyone who hears such information must deliver it immediately to the NYPD,” he said. 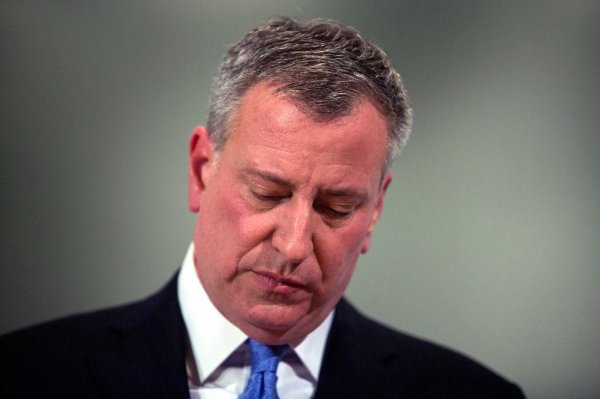 Why New York Cops Turned Their Backs on Bill de Blasio
Next Up: Editor's Pick