Perhaps Sony Pictures would like you to put aside all that dispiriting news regarding The Interview, the Seth Rogen–James Franco comedy whose plot about a U.S. assassination attempt on North Korean dictator Kim Jong Un led to the hacking of the company’s computers, mortifying revelations in stolen emails, dreadful threats of a 9/11-type attack on theaters and finally the cancellation of the movie’s Christmas-day opening. Instead, the studio suggests, take your kids to see Sony’s Annie, a fresh updating of the 1977 Broadway musical about the adorable orphan who transforms the zillionaire Daddy Warbucks into a benign father figure. Pure escapist fun.

Yet a couple of lines from Annie drag audiences back into the Interview mess. One of the movie’s sympathetic characters, the bodega manager Lou (David Zayas), fulminates against IT companies that appropriate “your information … so they can spy on you and take your soul.” Later, a sleazy campaign adviser named Guy (Bobby Cannavale) boasts of the lowlifes he has helped get elected. One is “Schwarzenegger.” Ha ha. Another: “Kim Jong Il.”

At an Annie press screening on Dec. 13, that line came as such a jolt that I wondered whether I was seeing a pre-hack rough cut of the movie. First of all, what election? The Democratic People’s Republic of Korea is a dynasty; Kim Jung Il succeeded his father, Kim Il Sung, as Un was named the Great Successor when Il died in 2011. And second: Why would the studio with two Christmas movies think it was fine to keep a second, throwaway Kim gag in its big family musical?

That said, I’m happy to report that Annie opened without incident last weekend and that, to my modest surprise, the movie isn’t totally awful. Based on Harold Gray’s 1924 Little Orphan Annie comic strip, which amused and soothed newspaper readers through the Great Depression, the new version casts Quvenzhané Wallis as Annie and Jamie Foxx as the Daddy Warbucks figure, Will Stacks. The Broadway score by Charles Strouse and Martin Charnin gets a synthy makeover by Greg Kurstin, Aussie singer-songwriter Sia Furler and director Will Gluck. Unlike Night at the Museum: Secret of the Tomb, its rival for underage audiences this Christmas week, Annie isn’t a candidate for worst movie of the millennium — despite what you may have heard. It’s certainly way more sit-throughable than director John Huston’s terminally stodgy 1982 film of the show.

In the script by Gluck and Aline Brosh McKenna, Will Stacks is a Michael Bloomberg type: he earned his billions in IT and wants to spend his largesse to become mayor of New York. When Annie is thrust in his path by chance, the opportunistic Guy notices Will’s low approval ratings skyrocketing and advises him to spend time with the girl. Bringing Annie to his penthouse means prying her from the clutches of foster-mom Miss Hannigan (Cameron Diaz) and giving her a surrogate mother in Will’s assistant Grace (Rose Byrne). Annie manages to overcome the political cynicism of Guy’s enterprise, captivate hearts and sing a few old-new hits.

Wallis, who at nine was the youngest person to receive an Academy Award nomination for Best Actress (for her role in Beasts of the Southern Wild), is 11 now and makes a smooth transition from wild child to domesticated starlet. She’s also a plausibly adorable Annie, with her halo of black hair reflecting the comic-strip character’s frizzy red mane. She’s given a big solo ballad, “Opportunities,” sung at a fundraiser at the Guggenheim Museum — which looks like “a giant cinnamon roll” — and aces it.

The rest of the movie is a teeter-totter between O.K. and Meh. Foxx and Byrne fill out their stereotypes of Will and Grace, the rich man and his girl Friday who need most of a two-hour movie to realize they love each other. An unexpected delight is a scene that wasn’t in the earlier version, and really has no place here: a visit to a movie theater for excerpts from a Twilight parody called Moon Quake Lake, with Ashton Kutcher as the hero, Mila Kunis as the heroine and Rihanna as the Moon Goddess. It provides Annie’s brightest few minutes.

On the minus side, Diaz’s stab at comic malevolence — which Carol Burnett turned into a treasure of shabby dipsomania in the 1982 film — has the odor of desperation until midway through, when Guy is revealed as the true villain and Hannigan is humanized by her bodega pal Lou. (Paging the actual modern Burnett — Kristen Wiig.) The scriptwriters also felt the need to explain song titles from the Broadway show (Girl 1: “What’s a hard knock life?” Girl 2: “One that sucks.”) and to point out that Annie names her dog Sandy in memory of the hurricane that devastated the East Coast two years back.

Filled with lurches from effervescence to ennui, this Annie is a mish-mosh pit that encourages indulgent viewers to dive in and have fun where and if they can find it. If they go with the movie’s ragged flow, they should find it more enjoyable than the 1982 Huston film.

It happens that my grumpy review of that Annie stirred a small industry ruckus. I ended the piece by quoting a remark that the movie’s producer, Ray Stark, had made to the New York Times: “I can only hope that on my tombstone are the words: ‘Annie, she is the one I was looking for’.” I added, “Funeral services may be held starting this week at a theater near you.” Just a joke, right? A few days later, Stark sent me a horseshoe wreath of dead flowers, emblazoned with a red ribbon reading, “Rest in Pieces.”

I wrote Stark a thank-you note, suggesting only that he might want to change florists, as his wreath to me arrived wilted. And that’s how we used to resolve animosities about movies. No high-stakes vandalism or terrorism; instead, a larkish little death threat. Ray Stark lived into his 90th year, and I’m still around. I’ll bet that Rogen and Franco are wishing they’d offended an old-line Hollywood producer instead of North Korea. 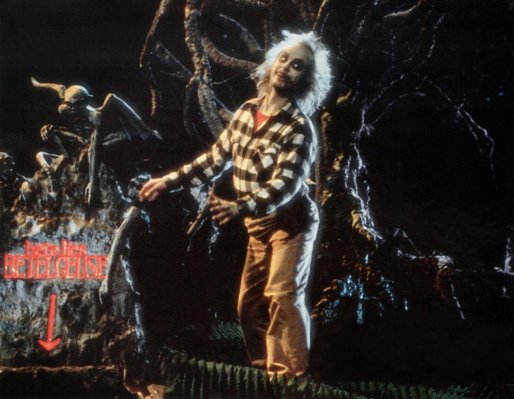 Tim Burton Says Beetlejuice Sequel Is 'Closer Than Ever'
Next Up: Editor's Pick