With government and international aid efforts initially floundering, the Desmonds were practically first responders
Paula Bronstein—Reportage by Getty Images for TIME
By Per Liljas

Josephine Desmond had been up all night pleading with her family members to leave their village of Maslog in the eastern Philippines. The reason: a monster storm was barreling straight at them. By the morning of Nov. 8 last year, no one was answering the phone. From her home in Subic Bay, a town in the northern part of the archipelago nation, Josephine saw images of death and devastation on television. “I felt like I had lost everyone,” she says.

Josephine was lucky—nearly all her kin were evacuated. But, for many, Supertyphoon Haiyan was a killer. Haiyan was the fiercest storm on record ever to make landfall anywhere, with wind speeds exceeding 300 km/h and a 7-m-high storm surge that flattened entire communities. More than 6,300 people died. A once tranquil region resembled a war zone.

With most infrastructure destroyed and local officials shell-shocked, international aid was blocked. Hours turned to days without relief. When help finally arrived in Maslog, it came in the form of a rickety van sporting the logo ocean adventure—a small marine park at Subic Bay owned by Josephine, 40, an expert diver, and her American husband Tim, 66, an animal trainer with Free Willy on his résumé.

At first the Desmonds intended to bring essential supplies for just Josephine’s relatives, whose homes were either wiped out or barely standing. But they quickly decided to provide for all of Maslog’s 500 or so families in case jealousy sparked resentment or even violence. “That could create a potentially dangerous situation,” says Tim. “So I started asking around and everybody pitched in. It was phenomenal.”

Ocean Adventure was transformed into an emergency-­response center. Tons of food, medicine, clothes and sanitary products were collected, and trucks were acquired to transport it all. Josephine and five armed men set off in a 20-year-old Toyota van with the first shipment to scout the route. Over the next two days and nights, they sawed their way through downed trees blocking roads, cooled down a constantly overheating engine and persuaded police at checkpoints to allow them through.

Outside the regional capital of Tacloban, Josephine and her team encountered looters holding up a delivery truck belonging to a local grocery chain. “They were hungry,” says Josephine. “Anything could have happened. I told them to take the goods but don’t hurt the driver.” The looters did as Josephine said and allowed her to continue with her shipment intact.

Miraculously, only two had died in Maslog, but the need for food and medicine was desperate. After setting up camp in a schoolyard, Josephine registered residents to keep track of what they received, and distributed her supplies. In Subic Bay, Tim packed chainsaws and half a ton of nails—needed to carve up thousands of felled coconut trees to build new houses in Maslog.

More typhoons form in the warm waters around the Philippines than anywhere else in the world. With ocean temperatures rising because of global warming, the threat has intensified. Two super­typhoons pummeled the Philippines in the two years before Haiyan, claiming about 2,000 lives. In the past year, one supertyphoon narrowly skirted the country, before Typhoon Hagupit hit in early December. This time, Philippine authorities launched what the U.N. called one of the largest peacetime evacuations ever, moving about 1.7 million people to temporary shelters. At least 27 people died, but the death toll could have been much higher without those steps.

That wasn’t the case with Haiyan. Both the preparation and the response were painfully in­adequate. Haiyan’s impact had been anticipated for days, but residents were not sufficiently warned about the expected storm surge, and government relief money didn’t flow in earnest for a year. As the next typhoon season started, more than 2,000 people were still living in tents. “At a time when we needed help the most, our government did not help us,” says Bernardita Valenzuela, information chief at Tacloban’s city hall. “That’s unpardonable.”

After four months, the Desmonds were exhausted. In all, they had distributed about 20 tons of aid. But Josephine had contracted chikungunya, a virus spread by mosquitoes that causes fever, aches and rashes. Also, the Desmonds began to run up against local corruption. “That wonderful moment when everyone pulls together only lasts for a while,” says Tim. “As people start to recover, all of this bubbles up and gets worse.” It was time to go home.

Not until Oct. 30 did the central government in Manila finally approve a $3.8 billion recovery plan, supported mainly by the World Bank and the Asian Development Bank, for the areas pummeled by Haiyan. The long delay spotlights how essential the Desmonds’ work was. Tim, though, is modest about what he and Josephine accomplished. “Our contribution was merely a grain of sand,” he says. “But we managed to hold out until the big boys came in.” 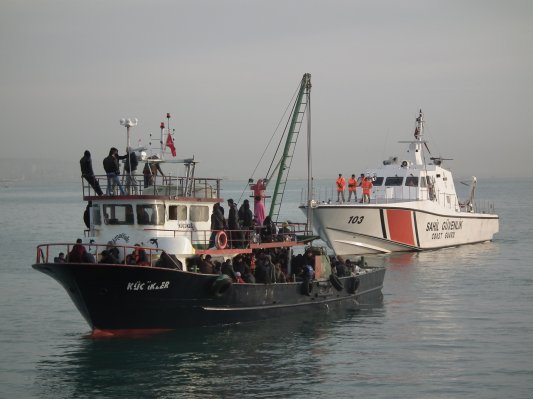 Meet the American Couple Saving Thousands Trying to Get to Europe
Next Up: Editor's Pick