New York Police Department officers Mark Cava, left, and Jason Muller participate in a moment of silence for two slain NYPD officers before an NBA basketball game between the Brooklyn Nets and the Detroit Pistons on Dec. 21, 2014, in New York City.
Jason DeCrow—AP
By Per Liljas

The NYPD tightened protocol for its officers, as the city mourned the loss of the two policemen gunned down over the weekend.

New York police officers were directed to only go on foot patrols in pairs, the New York Times reported, after policemen Wenjian Liu and Rafael Ramos in Brooklyn were shot to death by a mentally unstable man on Saturday afternoon.

Thousands of unarmed volunteer auxiliary officers have had their patrols suspended.

Liu, 32, and Ramos, 40, were the first NYPD officers to be killed on duty since December 2011. The suspected gunman, Ismaaiyl Brinsley, 28, had posted on Instagram that he was “putting wings on pigs today,” before coming up from behind their patrol car and firing four shots through the passenger window. He later apparently turned the gun on himself.

Police commissioner William J. Bratton visited the makeshift memorial at the Brooklyn crime scene Sunday. A candlelight vigil took place in Harlem. President Obama also offered his condolences to Bratton over phone from his vacation in Hawaii, and Jeh C. Johnson, the head of the Department of Homeland Security, visited the precinct where the slain officers worked.

“They were assassinated — targeted for their uniform, and for the responsibility they embraced: to keep the people of this city safe,” Bratton wrote in a message to all 35,000 members of the department. “Be safe.”

Jaden, the 13-year-old son of slain Officer Rafael Ramos, wrote on his Facebook wall: “This is the worst day of my life. It’s horrible that someone gets shot dead just for being a police officer. Everyone says they hate cops but they are the people that they call for help.”

Shakuwra Dabre, mother of Brinsley, told DNAInfo on Monday she was “horrified” to learn her son had killed two police officers. “I still wish to extend my condolences to those families because they’re grieving and I’m grieving also at the loss of my son.”

The shootings also came at a time of tension between the police, particularly the unions, and New York Mayor Bill de Blasio, which was especially apparent on Saturday, as several officers turned their backs on the Mayor as he held a news conference. 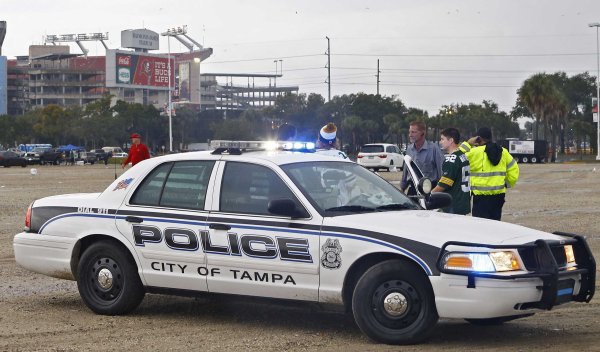 Multiple People Injured by Lightning Strike After Buccaneers Game
Next Up: Editor's Pick