The attack by a man identified as Ismaaiyl Brinsley, who posted on social media specifically about wanting to kill police before traveling to New York City and shooting the officers at close range, arrives at the end of months of rising tension between de Blasio and the city’s police force.

Police union leaders have already criticized de Blasio’s lack of support for city police officers, who have been the subject of increased scrutiny after a grand jury declined to indict a white cop in the chokehold-related death of Staten Island man Eric Garner. The grand jury decision was issued around the same time that police shot and killed an unarmed black man, Akai Gurley, in a darkened stairwell in Brooklyn.

Nationally, protests against racial profiling and excessive police force have centered around the rallying cry #BlackLivesMatter, taking place in malls, football stadiums and on the streets of major cities like Los Angeles; Atlanta; Chicago; Oakland, Calif.; and Washington, D.C. The protests have primarily focused on Garner and Michael Brown, the unarmed black teen shot and killed in Ferguson, Mo., in August, as well as 12-year-old Tamir Rice, who was shot and killed in November by Cleveland police who thought his toy gun was real.

De Blasio has previously expressed sympathy for the Garner family, and has called for “an honest conversation in this country about a history of racism.”

During a news conference on Saturday, the mayor stressed the importance of police and expressed outrage at the afternoon attack. “We depend on our police to protect us against forces of criminality and evil,” he said. “They are a foundation of our society, and when they are attacked, it is an attack on the very concept of decency.”

Police said Brinsley shot his ex-girlfriend in Baltimore before traveling to New York City on Saturday, killing officers Wenjian Liu and Rafael Ramos, who were sitting in a squad car, and then turning the gun on himself.

The tension between police officers and de Blasio was visible during the news conference, as several officers turned their backs to de Blasio when he entered the room. Days before the ambush, union leaders had circulated a letter in which officers may request that de Blasio not attend their funerals if they die on duty.

Police: NYPD Gunman Told Passersby to 'Watch What I'm Going to Do'

Yankees Will Pay for Education of Slain NYPD Officer's Children

The Sergeants Benevolent Association, a union of NYPD officers who have heavily criticized de Blasio since Garner’s death in July, said:

Community leader the Rev. Al Sharpton, who has organized rallies protesting the nonindictments in the Garner and Brown cases, said in a statement: 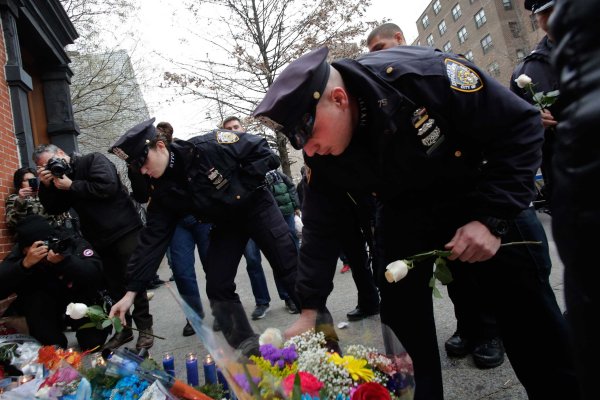