Activists of Muttahida Qaumi Movement (MQM) party shout anti-Taliban slogans in a protest rally in Karachi on December 19, 2014, against an attack by Taliban militants on an army-run school in Peshawar.
ASIF HASSAN—AFP/Getty Images
Ideas
By Sohaib N. Sultan
Sohaib Sultan is the Imam and Muslim Life Coordinator in the Office of Religious Life at Princeton University and directs the university's Muslim Life Program in the Office of Religious Life. He is the author of The Koran for Dummies (Wiley, 2004) and The Qur'an and Sayings of the Prophet Muhammad: Selections Annotated and Explained (Skylight Paths, 2007).

Last Tuesday morning we awoke to the horrific news that Taliban gunmen mercilessly attacked and killed more than 140 people, mostly children and their heroic teachers, at a school in Peshawar, Pakistan. It was the latest massacre to visit a region that has experienced so much violence and bloodshed for far too many years. The targeting and killing of children in particular has evoked a passionate response in Pakistan and beyond against the Taliban and those who engage in violent extremism in the name of Islam. The rage and resolve is palatable as funeral processions were organized to lay the precious innocents to rest.

Every time such incredible violence is perpetrated by people who claim the mantle of Islam, the same question echoes from the halls of academia to the talking heads in the medai: Where are the “moderate Muslims” and when will they stand up against all this murder and mayhem committed in the name of their faith? These questions tend to be followed up by a call for a “moderate Islam” to counter religious extremism.

The idea of a moderate Islam certainly sounds appealing. There is plenty in the Islamic sources and tradition that promotes the virtue of moderation and in praise of the middle way. The Qur’an describes the ideal Muslim community as one that pursues the “middle way” (2:143) and continuously insists on moderation in all spheres of life (7:31 and 25:67, for example). The Prophet Muhammad, in authenticated traditions, specifically warns his followers not to go to extremes in religion and corrected three men from his community who made vows of continuous fasting, night vigil, and celibacy — teaching them instead to follow a more moderate course even in their devotional commitments to God.

But, the problem with “moderate Islam” is two-fold: First, often it is invoked in a very imperialist way by the rich and powerful who just want Muslims to join their bandwagon and make no trouble. The imperialist trend insists that Muslims condemn Muslim fanaticism, but do nothing to oppose the extremist agenda of the military industrial complex that too often (mis)guides American foreign policy or the prison industrial complex, for example, that leads to too many abuses here at home. Second, it is arguably this “moderate Islam” attitude that has led to a quietism in the face of intolerable crimes as political Islam is left to the “radicals” and “extremists.” This type of Islam that is promoted, inside and outside the Muslim community, often insists that Muslims engage in social justice–but not at the risk of their careers or livelihoods–or that Muslims align themselves with the poor and weak in society, but without ever compromising their own personal comfort. In summary, “moderate Islam” has led to an Islam that is just too darn convenient for those who insist on maintaining the status quo. And, thus, “moderate Islam” has lost any capacity among the masses to lead a serious movement for change.

Perhaps, what we need to counter violent radicalism in the name of Islam is not a self-serving “moderate Islam,” but, rather, a counter-Islamic movement that is rooted in and insists on radical love — a radical love that uncompromisingly stands with the truth and with what is truly just; a radical love that urges reconciliation over revenge, peace over power, wisdom over war, asceticism over affluence, service over selfishness, compassion over callousness, and truth over tribalism.

This radical love is the path that all of the great prophets and sages throughout history preached and practiced. When the Prophet Muhammad chose mercy instead of revenge against the people who stoned him in Taif, or when he chose to form a treaty with his enemies instead of perpetual war at Hudabiyyah, or when he chose to forgive his Meccan oppressors after conquering them — he showed us what radical love really looks like. Yet, when it came time to fighting oppressors and tyrants who insisted on harming innocents, the Prophet was courageous and did not shrink from protecting his people. On the battlefield, though, he constantly prayed that his enemies would change their ways and grieved over their state of affairs. This, too, was a bold example of radical love.

The Qur’an, while acknowledging the virtue of the middle way, often pushes its readers to be more radical in their approach — responding to enmity with peace (25:63), choosing forgiveness instead of revenge even when blood has been spilled (2:178), embracing former enemies as friends (60:7), and so on.

In the aftermath of the Peshawar massacre and in the face of extreme violence, it is natural for us to want to see the murderers and those who fuel hateful ideologies brought to justice. It is even right to pursue and punish perpetrators of crimes against humanity. But, our pursuit must not be rooted in hatred; our pursuit must be one of radical love — love for justice, goodness, and compassion.

We must also come to understand that violent extremism as a phenomenon will not be defeated or even properly countered on the battlefield with guns and tanks alone. Instead, it’s going to take a counter-radical movement that is rooted in the higher principles of love to show violent extremists that there’s another and far more ethical way of being and living in a disenchanted world. And, to show our governments and militaries that war need not be our first or only choice.

So, as we move toward the new year, I pray that we leave behind radical violence and move toward an ethos of radical love that brings light in these dark times and guides us back to the way of the prophets and sages.

Sohaib Sultan is the Imam and Muslim Life Coordinator in the Office of Religious Life at Princeton University and directs the university’s Muslim Life Program in the Office of Religious Life. He is the author of The Koran for Dummies (Wiley, 2004) and The Qur’an and Sayings of the Prophet Muhammad: Selections Annotated and Explained (Skylight Paths, 2007). 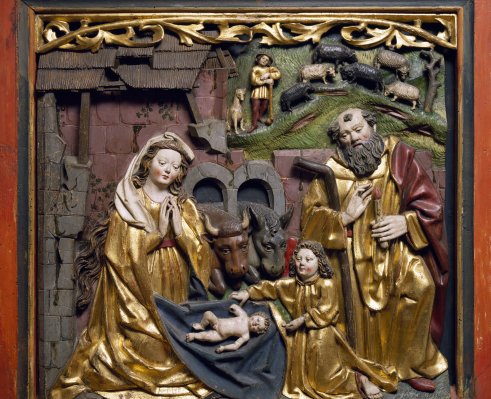 Why We Shouldn't Just Think of Christmas in Sanitized Images
Next Up: Editor's Pick