General view of the industrial zone at the oil port of Ras Lanuf on March 11, 2014.
Esam Al-Fetori—Reuters
By Jared Malsin

An ongoing battle for two of Libya’s key oil ports began last weekend because Islamist-leaning militias feared Egypt planned to reinforce the Libyan elected government based in the eastern city of Tobruk, according to a Tripoli-based analyst.

The fighting that has closed the oil terminals at Ras Lanuf and Sidra underscores how fears of Egyptian meddling in Libya is leading to an escalation of the country’s armed conflict. “They had information or belief that the Tobruk side was being reinforced in its military capacities,” says Claudia Gazzini, senior Libya analyst based in Tripoli with International Crisis Group. “The more evidence there is of Egyptian involvement, the greater the risk the opposing side might make abrupt strategy choices, like the one we saw over the weekend.”

Libya’s internationally-recognized government in Tobruk is locked in armed conflict with a rival government run by the Islamist-leaning Libya Dawn movement, based in Tripoli. The Tobruk government is allied with Khalifa Heftar, a general who declared war earlier this year against Libya Dawn. Heftar’s campaign, dubbed Operation Dignity, has triggered some of the deadliest fighting since the 2011 armed uprising that overthrew the regime of Muammar Gaddafi.

Egypt is concerned about instability from Libya spilling over into its territory. Egypt shares a long desert border with Libya that has been used to smuggle weapons, particularly since the 2011 uprising. More broadly, the Egyptian government led by President Abdel-Fattah el-Sisi, who led the military’s 2013 overthrow of Egypt’s elected Islamist government, regards the Tobruk government as one ally in what they see as a regional struggle against political Islam in which policy is guided primarily by religious rather than practical considerations.

“They want to reshape Libya’s political landscape where the Muslim Brotherhood and political Islamists don’t have a powerful role,” says Frederic Wehrey, a senior associate in the Middle East Program at the Carnegie Endowment for International Peace in Washington D.C. “The larger fear of having a country next door or where the Brotherhood is dominant is a real political concern for them.”

Though Egyptian officials deny direct military involvement, Egypt has taken a number of steps to aid the Tobruk side. In August, U.S. officials confirmed that Egypt allowed its airbases to be used in surprise airstrikes by the United Arab Emirates on targets in Libya. In November, Egypt sent special forces on two raids inside Libya, according to Western officials quoted by the New York Times.

In addition, forces allied to the Tobruk government have received weapons from Egypt. Gazzini says that in October she observed an Egyptian ship unloading in Tobruk port and that officials there confirmed that the ship delivered light arms.

In interviews in Cairo, Egyptian officials acknowledge that Egypt shares intelligence with the Tobruk authorities, but deny direct military operations. “Our position on the crisis in Libya is clear: to provide information, expertise and training,” says Hossam Khairallah, a former general in Egypt’s intelligence service. “But the conditions do not permit or favor intervention in Libya.”

Libya is just one arena where Egypt joins the wealthy Gulf monarchies of the UAE and Saudi Arabia in what Egyptian officials see as a regional power struggle with the forces of political Islam. Opposing them are other states, including Qatar and Turkey who are regarded as more sympathetic to the Muslim Brotherhood and other Islamist groups. The rivals also back competing rebel groups in Syria, as well as rival factions in Lebanon and in Palestinian politics.

“It’s clear that Egypt is involved in supporting Heftar’s forces in some respects,” says Chris Chivvis, a senior political scientist at the Santa Monica-based Rand Corporation. “Libya is at risk of becoming a proxy war for this conflict between authoritarian militarism and conservative Islamism, with different regional powers backing different sides.”

Inside Libya, analysts say the perception of Egyptian assistance for the Tobruk government is driving the calculations of the warring factions. “It has a very damaging effect for the country, because if it’s not true it gives the impression to the Heftar side that they have the military capacity, or will have the military capacity to carry out this military strategy for the liberation of Tripoli,” says Gazzini.

Egyptian Foreign Ministry Spokesman Badr Abdelatty says Egypt is prepared to offer training and capacity building for the internationally-recognized government and its military forces, but denied reports of direct intervention. “We are coordinating with neighboring countries to empower the legitimate government, legitimate institutions, namely the House of Representatives and current government in Tobruk,” he says. “We are not going to intervene militarily in Libya. This is not our business.”

Alaa Youssef, the spokesman for Egyptian President Abdel-Fattah El-Sisi, also denied Egyptian intervention in Libya. “President Sisi has made it clear several times that the Egyptian army will only secure the borders. In no way could it go beyond that,” he says.

Egypt is also concerned about the emergence of a militia in the eastern Libyan city of Derna that proclaims its allegiance to the so-called Islamic State in Iraq and Greater Syria (ISIS), the militant group that overran large parts of Iraq and Syria this year. The group is just one of dozens of individual militias operating throughout the country since the implosion of Libyan state institutions following the 2011 civil war. Since 2011, insurgents have exploited Libya’s vast desert borders to smuggle weapons into Egypt and other neighboring countries. “It’s on the top of our priorities here in Egypt. We cannot afford having a failed state on our western border,” says Abdelatty.

In Egypt, the military and police face persistent deadly attacks carried out by insurgents based in the Sinai Peninsula who also pledged loyalty to ISIS this year. Those attacks accelerated following the military’s July 2013 overthrow of elected president Mohamed Morsi, a leader of the Muslim Brotherhood. Since the takeover, the authorities have jailed thousands in a vast crackdown on the Brotherhood and other political opponents.

As a result, some Egyptian officials characterize the battle in Libya as an extension of the domestic fight against political Islam. “It’s imperative to deal with all terrorist groups with the same firmness,” says Abdelatty. “There is no difference from our point of view between ISIS, Fajr Libya [Libya Dawn], the Muslim Brotherhood, Jabhat An-Nusra, or Ansar Al-Sharia. They are all the same.”

Heftar, the general spearheading the current assault on the Islamists, is a former commander in Gaddafi’s army who trained under the CIA in the 1980s with the aim of toppling the Libyan dictator. In his current campaign against the Islamists, Heftar has modeled his rhetoric on that of Egypt’s President el-Sisi, a popular former military commander viewed by some Egyptians as a national savior and reviled by others as a new despot. Framing his campaign as an assault on terrorists, Heftar has said the viability of his campaign depends on the level of outside support, according to Wehry.

But after more than six months of fighting, Heftar’s forces have failed to dislodge the Islamists, and some Egyptian officials have lost their enthusiasm for the general. “I’m somehow disappointed,” says Sameh Seif el-Yazal, a retired general from Egypt’s General Intelligence service. “He should have interfered in some occasions where he did not,” he says, naming as an example the Libyan town of Derna, which was taken by extremists in late November. “We saw Derna falling to ISIS without any work from his side.”

Analysts say that Egyptian policy has also been influenced by lobbying from members of the former Gaddafi regime. “We know that senior members of the old regime are very close to the Emirati royal family and also to Egyptian security officials,” says Gazzini. “They are part of this process of creating the movement for the support for the Tobruk faction.” Gaddafi’s cousin and former aide Ahmed Gaddaf Al-Dam, lives in exile in Egypt.

For the Tobruk government and its allied forces, a victory on the battlefield would only yield more problems. “These Islamist groups are not going to go quietly,” says Wehrey. “They’ll probably shift to a different set of tactics, a terrorist campaign. They’ll go underground. It’s entered a dangerous phase.” In Libya, the only certainty is continued bloodshed. 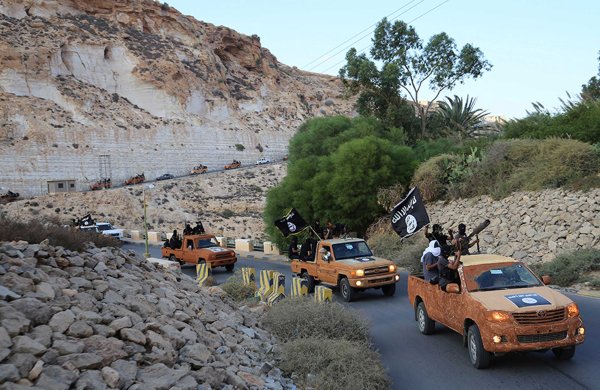