Regardless of the grand jury’s decision, America’s response to the shooting of an unarmed black teen by a white police officer in Ferguson, Mo., this year has been, predominantly, one of outrage. Officer Darren Wilson has fallen so far out of public favor that his unpopularity became an uneasy punchline in a Saturday Night Live skit (albeit one that didn’t air) in which a chef with a similar name has it pulled from the cover of his newly-published cookbook.

Thirty years ago today, on Dec. 22, an altogether different story played out on a New York City subway car, when a white man shot four black youths he believed were about to mug him — and instead of being reviled, he was celebrated. Before his name was known, newspapers dubbed him the “subway vigilante,” and many New Yorkers hailed him as a hero. When Bernhard Goetz finally turned himself in to the police, Joan Rivers reportedly sent him a telegram signed “love and kisses,” offering to help pay his bail.

Why was Goetz glorified while Wilson has been broadly reviled? There is the obvious point that Goetz, a scrawny electrical engineer who carried a .38 revolver inside his windbreaker, was not a law enforcement officer but a civilian who attempted to enforce the law as he saw fit — and many Americans seemed to view him as a triumphant underdog. A police officer would have been held to a different standard, then as now. But the magnitude of the recent public outcry over Brown’s death (and perhaps more tellingly over the death of Trayvon Martin two years ago) suggests that similar vigilantism would not be received as warmly today.

Despite their outward differences, both Goetz and Wilson identified the same motivation in using lethal force: fear. And one other thing the cases may have in common, says University of Texas professor Keisha Bentley-Edwards, is the possibility that longstanding racial stereotypes played a part in the threat that both Goetz and Wilson perceived in the moments before they fired shots.

“They both describe these primal looks in the eyes of the teenagers that made them decide they needed to use lethal force,” says Bentley-Edwards, whose research focuses on the racial experiences of youth.

In his confession, Goetz recalled sensing an ineffable, predatory menace from the four teens: “You see, what they said wasn’t even so much as important as the look, the look, you see — the body language… They wanted to play with me. You know, it’s kind of like a cat plays with a mouse before, you know.”

Wilson, in his grand jury testimony, described Brown’s “intense aggressive face,” explaining, “The only way I can describe it, it looks like a demon. That’s how angry he looked.”

“This is not to say that either of them did not feel threatened,” Bentley-Edwards adds. “It’s a question of whether that threat is rational enough to justify the use of force.”

Fear remains as powerful a motivator today as it was 30 years ago. But 30 years ago the feeling was so prevalent in crime-ridden New York that many people — black and white — identified with Goetz. Between 1965 and 1984, New York’s violent crime rate nearly tripled, thanks in part to an economic crisis and the crack epidemic. The city’s annual murder rate was fast approaching its 1990 peak of 2,245, or an average of six people a day. Bernie Goetz, it appeared, had every reason to think he was about to become one of them.

Few could blame him. A New York Times survey conducted shortly after the shootings found that 52% of New Yorkers overall — including 56% of whites and 45% of black respondents — believed Goetz’s response was justified.

Compare that to the majority of Americans — 57%, according to a CNN poll — who believe Darren Wilson should have been charged with a crime for shooting Michael Brown. (The CNN poll reflects a much wider chasm between white and non-white opinion, however: 49% of whites said Wilson should face criminal charges, compared to 78% of people of color.)

Goetz rallied support in part because New Yorkers were eager for tales of would-be victims prevailing against the bad guys. His story filled that void — at least initially, according to George Fletcher, a professor at Columbia Law School and the author of A Crime of Self-Defense: Bernhard Goetz and the Law on Trial.

According to news reports, as detailed in Fletcher’s book, the four black youths were “noisy and boisterous,” and menacing enough that the other riders had huddled on the opposite end of the subway car when Goetz got on. Two of the young men approached him and insisted that he give them $5. Instead, he pulled out a gun and shot each of them once. Then, as if scripted in a Western, he turned to one and said, “You seem to be [doing] all right; here’s another,” and fired the shot that severed the teen’s spinal cord, leaving him brain damaged and partly paralyzed. When the car stopped and a conductor appeared, Goetz walked to the platform between the cars, jumped down, and left through the subway tunnel.

“A common man had emerged from the shadows of fear. He shot back when others only fantasized their responses to shakedowns on the New York subways,” Fletcher writes, summarizing the mythology surrounding the shootings. “Like the Lone Ranger, the mysterious gunman subdues the criminal and disappears into the night.”

But when the gunman was unmasked a week or so later, he fell almost immediately from the pedestal of public opinion. His lengthy confession revealed a vindictive streak that complicated his apparent heroism and poked holes in his underdog persona.

Asked if he had intended to kill the teens, Goetz answered, “My intention was to murder them, to hurt them, to make them suffer as much as possible.”

Once it became clear — as more details of Goetz’s troubled past and racist tendencies emerged — that there was more to his story than justified fear and an attempt to make the subways safe, support for Goetz ebbed. Rampant crime had, it seemed, made New Yorkers so quick to identify with him that they hadn’t stopped to consider the possibility that other, less noble motives might be at work. After that point, accounts tended to portray Goetz as unhinged, though legally sane, says John Inazu, a law professor at Washington University in St. Louis who has written about the implications of the Ferguson shooting.

Nonetheless, Goetz eventually served only eight months for criminal possession of a weapon. (Since all four shooting victims survived, he didn’t face murder charges, but could have been convicted of attempted first-degree murder.)

Today, statutes governing police use of force and stand-your-ground laws on the books in many states mean a murder conviction still tends to be unlikely in cases where officers or civilians who fear for their own lives respond by taking someone else’s.

“The thirty years between Goetz and the deaths of Brown and Garner have seen many improvements in race relations, but our criminal justice system remains broken in many ways,” Inazu says. “Some of these use-of-force, self-defense, and stand-your-ground statutes are incredibly broad. For example, the current Missouri use-of-force statute is likely unconstitutional as written — it permits deadly force to effect an arrest when an officer suspects any felony, which would include someone who has passed a bad check.”

These statutes — and more permissive concealed weapon laws — can be seen as part of the lingering influence of Goetz’s onetime folk-hero status. But more people seem to be questioning the use of lethal force by police officers and civilian vigilantes today, says Bentley-Edwards. She doesn’t see the recent cases as setbacks in the strides America has made toward greater equality and inclusion.

“I feel like they’re opportunities for more progress, in that they’ve forced more frank conversations, and deeper investigations into policies that may be differently applied,” she says.

The best-case scenario, she says, is that they will lead to new, if awkward, discussions of race and justice — discussions as difficult today as they were 30 years ago, but critical to moving forward. There’s a better chance of that now that the fog of fear that blinded 1980s New York has lifted, and Americans are more likely to scrutinize self-defense stories than to celebrate them. 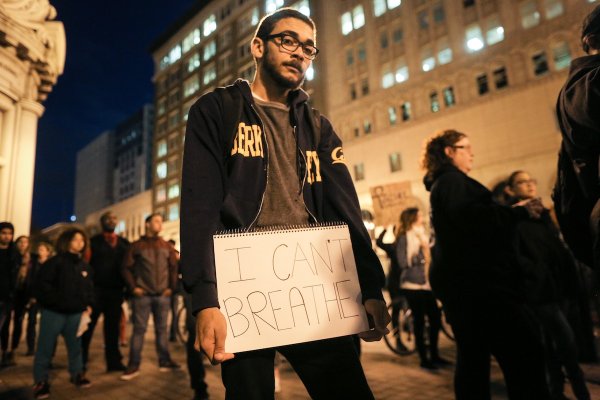 History’s Echoes in the Policing that Made Eric Garner Say 'Enough'
Next Up: Editor's Pick