Cameron Echols-Luper of the TCU Horned Frogs celebrates his 69-yard punt return for a touchdown in the third quarter during a game against the Kansas Jayhawks at Memorial Stadium on Nov. 15, 2014 in Lawrence, Kansas.
Ed Zurga—Getty Images
By Sean Gregory

Forgive fans of Texas Christian University’s football team for feeling blue over the holidays. After all, the Horned Frogs entered the last weekend of the regular season ranked third in the college football playoff rankings, good enough for a coveted spot in the four-team national semifinals. But by the weekend’s end, they painfully fell out of contention.

Horned Frogs boosters, take some solace. Because according to an annual academic ranking of the top 25 college football teams, your school is number one. “Overall, TCU is really the standout,” says Alexander Holt, policy analyst at New America, the Washington, D.C. think-tank which publishes the rankings, viewed first here at TIME. “It’s a real academic football power, which is very rare.”

For the final results, check out the chart below. Click the left tab for the football rankings, the right one for the academic top-25: 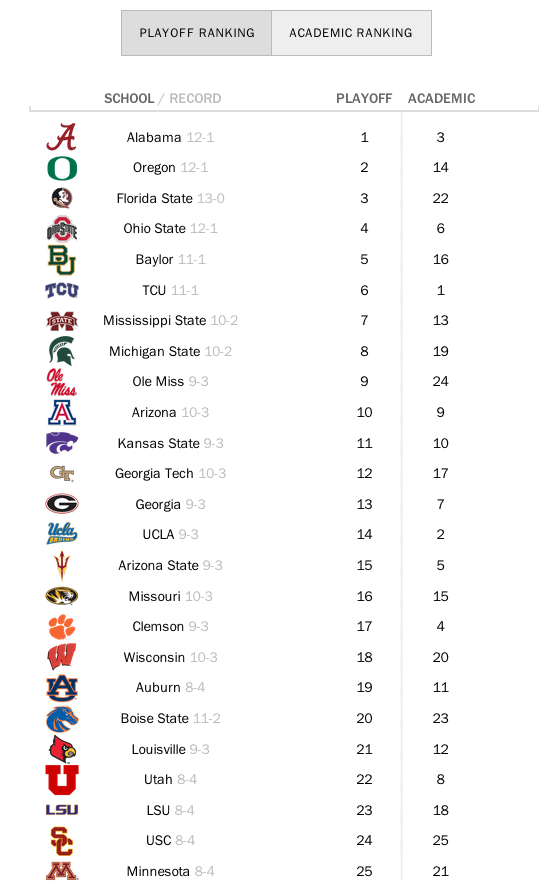 But New America penalized schools for graduating football players at different rates than the overall male student body at the school. To compare players to students, New America relied on federal rates, since there’s no GSR for the general population. The bigger the discrepancy, the harsher the penalty. It’s important to note that even if a school graduated football players at higher rates than the overall male student population — four schools in the top 25, TCU, Arizona State, Arizona, and Boise State, did so — the difference was counted as a penalty. Why? “We were not going to reward schools with really low overall graduation rates,” says Holt. In fact, schools got an added bonus for having high overall rates.

Of the four playoff teams — Alabama, Oregon, Florida State and Ohio State — the defending champion Seminoles have the lowest GSR, at 65%. “It’s super troubling,” says Holt. “Florida State is a very good football school. But what’s going on here with the other 35% of the players?”

TCU’s academic win won’t match the euphoria that a national title would deliver. But it’s something, right? “Sure,” says Jamie Plunkett, a TCU alum and managing editor of Frogs O’ War, a TCU fan site. “It’s always cool to be ranked number one in something. Where’s Baylor on that list?”

Correction: A number cited by Alexander Holt was misquoted in the original version of this story. The percentage of Florida State players who did not graduate is 35%.

Read next: The Big 12 Bites Itself in College Football Playoff

Marcus Mariota Wins the Heisman Trophy
Next Up: Editor's Pick