Wall Street Money Can Predict How Democrats Vote. Here's How

By Chris Wilson and Pratheek Rebala

A week after the gargantuan spending deal squeezed through Congress, many Democrats are still smarting over a provision in the bill that rolls back regulation on how banks can take risks with taxpayer money.

While the financial sector’s boon was too big a pill for many on the left to swallow, 57 Democrats in the House ultimately voted for the legislation, pushing the bill over the goal line. (The final vote for the bill, which picked up the nickname “Cromnibus” along the way, was 219-206).

As the Washington Post noticed last week, those 57 Democrats received considerably more money in campaign donations from the financial sector than their colleagues who voted against the bill. While this may not be terribly surprising, it is an usually clear example of the correlation between money and votes. (As always, the causation–whether the money directly influenced a lawmaker’s vote–does not come along for the ride in this analysis.)

To put a finer point on it, TIME collected data from the Center for Responsive Politics on how much money financial companies gave to each House Democrat in the past two years. When you line up the members in the order of how much they got and how they voted, the pattern is pretty clear. (A handful of newer members are missing due to incomplete data.)

The controversial provision was originally a standalone bill, parts of which was reportedly drafted by Citibank lobbyists. That bill passed the House in 2013 with the support of 70 Democrats but never became law. The divide in the party among those who receive significant contributions from the financial sector was even more apparent then.

Finance, Insurance and Real Estate companies gave a total of $304 Million to members of congress in the last election cycle, more than any other industry identified by the Centre for Responsive Politics. Cory Booker (D-NJ), Mitch McConnell (R-KY) and John Boehner (R-OH) are top recipients from this industry each receiving over $3 Million. The same companies also gave Rep. Kevin Yoder (R-KS), the congressman who introduced the controversial amendment into the spending bill, $206,700 in the same cycle. These figures don’t include the money that groups like Citibank spent on lobbying efforts.

Members of Congress make voting decisions based on an extraordinary number of considerations, and any given representative can argue quite persuasively that he or she is not motivated by the wants and desires of major donors. When you zoom out, however, you see a correlation between donations and voting behavior that is very unlikely to be a random occurrence, regardless of the root causes.

These figures represent political action committees (PACs) representing financial companies made to candidates, not employees who work for those companies, and do not include contributions made to members’ leadership PACs. The Center for Responsive Politics defines financial companies as commercial banks, credit unions, real estate companies, and a variety of other related industries. The correlation coefficient between the binary outcome of the vote and the dollar amount of contributions was 0.34 for HR 83 and 0.42 for HR 992. 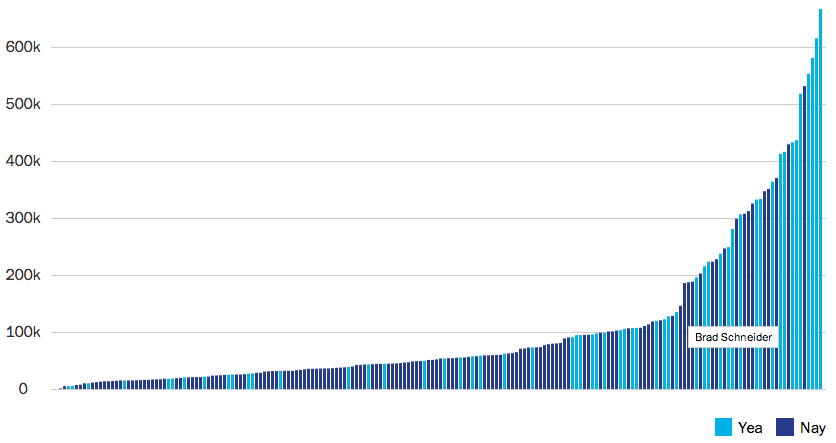 Obama's Judicial Legacy May Have Been Settled This Week
Next Up: Editor's Pick