Beyoncé performs onstage at the 2014 MTV Video Music Awards at the Forum in Inglewood, Calif., on Aug. 24, 2014
Jason LaVeris—FilmMagic
By Charlotte Alter

It’s the end of the year, which means ’tis the season for grandiose hyperbole. So let’s go there: since the dinosaurs roamed, since the pyramids were built, since the locomotive was invented, there has never been a better year for women than 2014.

That doesn’t mean things were great for all American women in 2014. Actually, a lot of things really sucked. But “not great, and never been better” is the rallying cry of a movement in progress, and that’s where women have been this year.

Think about it. Frozen, a sister-love story, became the highest-grossing animated film of all time. While performing songs from her 2013 surprise album, Beyoncé quoted Nigerian author Chimamanda Ngozi Adichie’s thoughts on feminism in front of a live audience at this year’s VMAs. For the first time ever, a woman (Maryam Mirzakhani, a Stanford professor) won the prestigious Fields Medal for Mathematics, widely considered the “Nobel Prize” of math. Janet Yellen became the first female chair of the Federal Reserve; GM and American Apparel both got female CEOS; and Apple and Facebook offered to cover elective egg freezing for their employees. A 17-year-old girl became the youngest person ever to win the Nobel Peace Prize.

But those are just the victories, and 2014 wasn’t necessarily so important because of all the “firsts” or “bests.” Instead, 2014 was characterized by loud, frustrating, and often unresolved discussions about justice for women that reached an unprecedented volume. We didn’t necessarily “win” any of these battles — and when it comes to debates over sexual assaults, domestic violence and contraceptive coverage, it’s hard to know what “winning” looks like — but we fought them harder and louder than ever before.

Take, for example, the ever thorny issue of sexual assault on college campuses. These assaults have been happening for years, rarely acknowledged and barely addressed. But this year, we’ve gone from whispering about sexual assault to shouting about it. In January, President Obama established a White House task force to protect students from sexual assault, and the spearheaded campaigns like 1 Is 2 Many and Not Alone to raise awareness about campus assault. In May, the Department of Education released a list of universities under investigation for mishandling sexual-assault cases. And in late July, Senators Claire McCaskill (D., Mo.) and Kirsten Gillibrand (D., N.Y.) led a bipartisan coalition to introduce the Campus Safety and Accountability Act to reform the way colleges investigate and punish sexual assaults.

And that’s just the government activity. On the ground, students have been staging protests to demand justice (like Emma Sulkowicz at Columbia, who is carrying her mattress around with her until her alleged rapist is expelled). Twitter has become an open platform for survivors to speak out about their experiences using hashtags like #YesAllWomen and #RapeCultureIsWhen. The media missteps this year, from Rolling Stone’s UVA debacle to the Washington Post column in which George Will called rape survival a “coveted status,” have been troubling. But they’ve also sparked larger, louder, online conversations about how we treat sexual-assault survivors than we’ve ever had before.

Have we fixed the problem of sexual assault on campus? Definitely not. Are we making progress? More than ever.

Or look at domestic violence in the NFL. In 2013, there were seven NFL players arrested for domestic violence, down from nine in 2008, according to USA Today’s Player Arrests database (these are the years with the highest concentration of recorded domestic-violence arrests in the NFL, and this is just the women who call the police). Only four NFL players were arrested in 2014 for beating up their wives or girlfriends, but Ray Rice was one of them.

When a video emerged in September that showed Rice punching his then girlfriend Janay Rice in the face, it sparked a massive dialogue about domestic violence and NFL codes of conduct. Ray Rice was suspended indefinitely by the NFL (a suspension that has since been vacated after a successful appeal), and the organization was under so much scrutiny that some were calling for commissioner Roger Goodell to resign. Under increased pressure from feminists and survivors (including some using the hashtag #WhyIStayed), the NFL was forced to finally grapple with a problem it had long tolerated with an uneasy silence. Goodell hired three female advisers — Lisa Friel (a former sex-crimes prosecutor), Jane Randel (co-founder of No More) and Rita Smith (a former executive director of the National Coalition Against Domestic Violence) — to help reshape the league’s domestic-violence policy.

Since October, the NFL has announced multiple initiatives, including educating players and their families and updating its personal-conduct policy, in order to address domestic violence in the league. And the social-media response has made it clear that the public is not happy with NFL players beating up women and continuing to play. Even players like Eli Manning and Cris Carter have participated in PSAs to get the public talking about sexual assault.

Has the NFL effectively addressed their problem with domestic violence? Hell no. Has there been progress? More than ever.

Consider Bill Cosby. People had been whispering about the (formerly) beloved comedian’s habit of drugging and raping women for years — there was even a joke on 30 Rock about it five years ago. In 2005, more than 10 anonymous “Jane Doe” victims agreed to testify against Cosby in a lawsuit that was ultimately settled out of court, and even after it was reported in the press, there was little public outrage. But when comedian Hannibal Buress mentioned the rape allegations in a stand-up routine this year, the public finally took the allegations seriously. More than 16 women have come forward to share remarkably similar stories, and many of them say they were drugged before Cosby assaulted them. Despite the years of whispered rumors, it was only in 2014 that Cosby’s reputation as “America’s Dad” started to tarnish.

Do we always take rape victims seriously when they accuse powerful men of assaulting them? Not really. Are we making progress? More than ever.

Yes, a lot of things still sucked for women in 2014. The Supreme Court’s Hobby Lobby ruling was a blow to reproductive rights, we still don’t have a comprehensive family-leave policy, and women are still paid less than men for doing the same work.

So 2014 has been a year of setbacks, indignities and outrage. It’s not been great. But it’s better than ever. 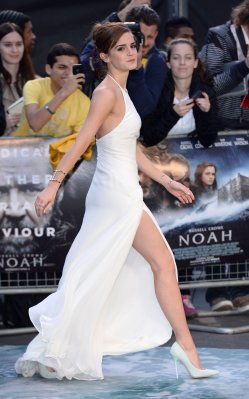 Emma Watson Is the Top Celebrity Feminist of 2014
Next Up: Editor's Pick