Pakistani people carry the coffins of the victims of a Taliban attack at an army-run school, prior to their burial, in Peshawar, Pakistan on December 17, 2014.
Anadolu Agency—Getty Images
Ideas
By Maajid Nawaz
Maajid Nawaz is Co-Founder and Chairman of Quilliam, a think tank focusing on matters of integration, citizenship & identity, religious freedom, extremism, and immigration. His work is informed by years spent in his youth as a leadership member of a global Islamist group, and his gradual transformation towards liberal democratic values. His autobiographical account of his life story, Radical, has been released in the UK and U.S.

International media coverage of the school attack that shook Peshawar this week, carried out at the hands of the Pakistani terrorist group Tehrik-e-Taliban Pakistan (TTP), has been, for all intents and purposes, commendable. The news has resisted the urge to breeze over this abhorrent event as “just another terrorist attack in South Asia,” nor has it spared the world from the horrors of what took place that day. The barbarism, the sheer brutality, of those seven TTP terrorists has been well reflected.

However, as a British Muslim of Pakistani origin who has a deep connection to my ancestral roots, there’s a missed opportunity. Without shedding light on the ideology and context of these atrocious events, it is impossible for the rest of the world to begin to truly understand the unique cocktail of instability that is Pakistan today.

Let us address ideology first. It is a bitter pill to swallow, but the fact of the matter is that the seven terrorists responsible for killing more than 100 children on Tuesday were not madmen. They were not sociopaths, or psychotic. What they were is a victim of the most rejectionist, poisonous, and virulent of extremist ideologies – jihadism – something that they were likely exposed to from a young age.

Each child they shot and killed, these terrorists believed, was a righteous death. And, as they prepared to push to the button that would blow them up, they will have done so thinking that paradise was where they were headed.

At this heart of their unwavering belief that they were “doing the right thing” is the ideology that consumed them. That will not come as a surprise. However, what probably will is the fact that this same ideology is not as alien as we in the West might like to think it is. Similarly, nor is the ideology of a very different jihadist group, Islamic State, so distant.

What these two groups share is a desire to implement their form of Islam over society through the establishment of what they deem to be a “caliphate” that implements their interpretation of sharia as law. This desire is something that all Islamists share – whether they are “non-violent” or “terrorist,” a motivation that permeates across all Islamist movements. It is something that will always present a problem as once someone is convinced that they have a divine right to assert their belief system over that of others, they must exclude basic rights like the fundamental human freedoms of religion and speech. This is why undemocratic ideological beliefs need to be challenged head on, no matter which religion they claim to speak on behalf of.

But what could make such an appalling ideology alluring? There is no question that the TTP are one of the worst manifestations of violent fundamentalism. No one doubts the fact that they are ruthless and merciless, the perpetrators of countless unforgivable killings. However, this most recent attack did not just spring from their irrational hatred and rejectionism, nor was it driven simply by ideology.

Rather, what caused it, as much as anything else, was a desire for vengeance. Ideology just rendered the crimes permissible.

The TTP has made no effort to hide the fact that the massacre was, in a sense, blowback from the Pakistani Armed Forces’ military operations in the tribal lands. Operation Zarb-e-Azb, which translates roughly as “Sharp and Cutting Strike,” began over the summer around the same time as the Israeli operation in Gaza. While there was massive international outcry over Gaza, though, there was a near media blackout on Pakistan.

Therefore, the military was able to act with relative impunity, a level of ruthlessness even greater than Israel and more in line with the Sri Lankan state’s operation to wipe out the Tamil Tigers.

That operation was not the first of its kind. Indeed, it is symptomatic of a more deeply rooted problem for the Pakistani state, its militarism. Coupled with a dreadful human rights culture, the Pakistani establishment’s almost exclusively military approach to countering the violent extremist forces that run riot in the country renders the jihadist ideology embodied in groups like the TTP all the more persuasive and increasingly pervasive.

As the “War on Terror” has so clearly shown, what with the abject anarchy that is rocking the countries in which the U.S. sought to wage this “war,” a military approach will not work on its own. On the contrary, it will only make things worse. Bombs and bullets are not enough; Pakistan, just like most other countries too, is in need of complimentary, civil society-led, anti-extremism measures that champion the protection of human rights of all citizens. This means crossing a bridge that there is very little appetite for right now, and entertaining some uncomfortable conversations about the role of religion in public life.

It is not sufficient for us to merely condemn the TTP’s school attack and consider ourselves somehow absolved. No one deserves thanks for condemning the brutal murder of children. How low could our expectations have possibly sunk? Moderation is entirely relative to where others around us are on a scale. If the entire scale is so skewered towards the Islamist ideology that the Afghan Taliban appear “moderate” in their condemnation of this attack, or al-Qaeda appear “moderate” in comparison to ISIL in Syria, then we are a long way off from peace.

How could such a situation emerge where the “moderate” alternatives to such brutality seem only to be other jihadist terrorists? The entire framework of debate for those populations surrounded by jihadist groups is currently occurring within the Islamist context. Without a long-term approach to uprooting the Islamist ideology itself, through civil society activism, there’s not much hope of stemming such atrocities. At the same time, the Pakistani government must recognize that it cannot, and must not, simply bomb its way out of this quagmire.

Maajid Nawaz is Co-Founder and Chairman of Quilliam, a think tank focusing on matters of integration, citizenship & identity, religious freedom, extremism, and immigration. His work is informed by years spent in his youth as a leadership member of a global Islamist group, and his gradual transformation towards liberal democratic values. His autobiographical account of his life story, Radical, has been released in the UK and U.S. 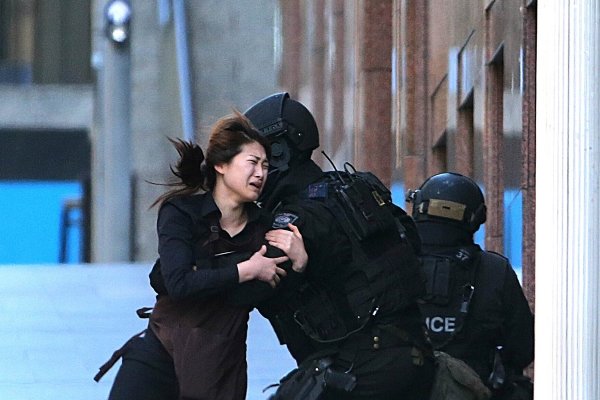 Sydney Hostage Attack Is Not a Wake-Up Call
Next Up: Editor's Pick