Baalke said the decision to cut McDonald was due to a “pattern” of behavior by the player.

Earlier Wednesday, the San Jose Police Department announced that McDonald is being investigated for a possible sexual assault. McDonald’s house was served with a search warrant on Tuesday night after the department received a call from a local hospital regarding the alleged victim, who was receiving treatment. No arrests have been made and the investigation is ongoing.

McDonald, 30, spent eight seasons in San Francisco after being drafted in the third round in 2007.

He made 68 starts for the 49ers and has 210 tackles, 19.5 sacks and three fumble recoveries in his career. The veteran started all 14 games to date this season and had 39 tackles and three sacks.

Last month, McDonald was cleared after an investigation into an alleged domestic violence incident at his home. He was arrested on Aug. 31 on suspicion of felony domestic violence, and after the investigation, the district attorney said it did not find sufficient evidence to press charges and characterized it as a “physical struggle between two parties, each party blaming the other.”

In September, police revealed an earlier incident that occurred at the home of McDonald and his fiancée. In May, police had been called to the home due to a dispute between a man and a woman in which the woman eventually pulled a gun on the man.

McDonald continued to play throughout his investigation for domestic violence, as 49ers coach Jim Harbaugh and CEO Jed York both said they would not discipline McDonald until there were further developments in his case. 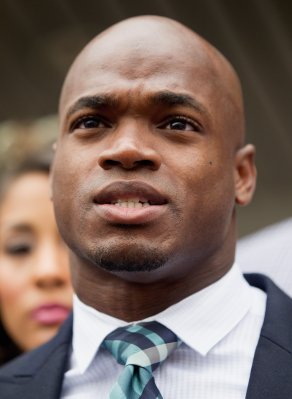 Players File Lawsuit Against NFL Over Adrian Peterson
Next Up: Editor's Pick