Actors James Franco (L) and Seth Rogen at the premiere of the film "The Interview" in Los Angeles, Ca. on Dec. 11, 2014.
AFP/Getty Images
By James Hibberd / Entertainment Weekly

If you don’t see The Interview, do the terrorists win?

In the wake of Tuesday’s unprecedented hacker threat pledging 9/11-style attacks on theaters screening Sony’s The Interview, a few Hollywood luminaries are encouraging fans to buy a ticket to the film as an act of defiance. Actor-producer Adam McKay, writer-producer Judd Apatow, and writer-actress Mindy Kaling are among those urging their Twitter followers to support the imperiled Seth Rogen and James Franco comedy about an assassination attempt on North Korean dictator Kim Jong-un. Currently, the film is scheduled to open nationwide on Christmas.

And her co-star Ike Barinholtz:

On Wednesday’s episode of ABC’s The View, the co-hosts disagreed on whether to see the film, which is currently averaging only a 46-percent positive rating on Rotten Tomatoes. Nicolle Wallace said, “We have a good history of not being bullied by thugs,” to which Rosie O’Donnell replied, “I just feel like it’s not worth it to me to see a movie that’s supposedly not all that funny. … It’s not like this is some Spielberg epic.” Wallace shot back: “I just think the point is if you want to see it don’t let some goon in North Korea change your plans.” (North Korea has denied being behind the hacker attacks but called the film “an act of war” last June.)

At this point, perhaps the bigger question is whether viewers will even have an option to see the film at all. Landmark Theaters has canceled the film’s New York premiere, and stars Rogen and Franco have canceled their promotional appearances. Sony told theater owners they may back out of their agreements to screen the film, and at least a couple of chains have taken the studio up on that offer. 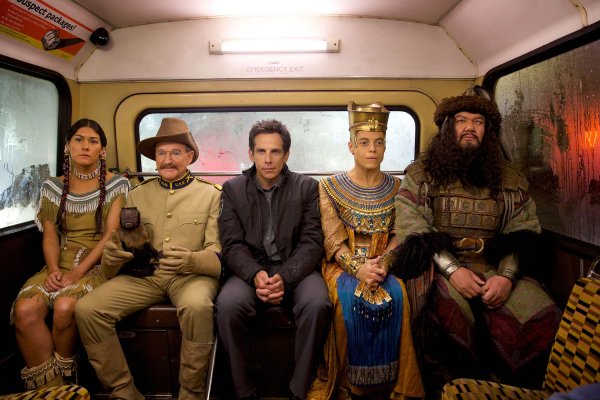 REVIEW: Did Anyone Have a Good Time Making 'Night at the Museum 3'?
Next Up: Editor's Pick