Things are getting festive at Pottermore, with today’s new piece of content in J.K. Rowling’s series of new Harry Potter tales. Today, solve the (potentially easiest) riddle and you’ll be granted access inside Professor Slughorn’s exclusive holiday party, complete with house elves and mistletoe and all the mince pie you could ever want. The riddle reads as such:

With vampires and authors and a gatecrashing Malfoy, Slughorn’s Christmas party is one for (almost) all to enjoy. Much to the surprise of fans, friends and the rest, Which Loony Ravenclaw does Harry bring as a guest?

Even a Squib could solve this riddle! The answer is Luna Lovegood, obviously. Fans can click through the interactive festivities to find a new piece of content from Rowling about vampires, a species that don’t come up very often in the books. Rowling reveals that wasn’t the plan all along. According to her early notes, she toyed with the idea of a vampire teacher called Trocar, named for a “sharply pointed shaft inserted into arteries or cavities to extract bodily fluids.” Alas, Trocar was edited off somewhere along the line.

But that didn’t stop fans from speculating about another character who could be a vampire: Severus Snape. “While it is true that he has an unhealthy pallor, and is sometimes described as looking like a large bat in his long black coat, he never actually turns into a bat,” Rowling writes. “We meet him outside in the castle by daylight, and no corpses with puncture marks in their necks ever turn up at Hogwarts.”

It might strike Potter superfans odd, of course, that others would continue speculating about Snape long after learning the truth about him. Especially because if he was a vampire, Snape could never be around someone after using his spell sectumsempra and not react to all the blood. Didn’t you guys read Twilight? 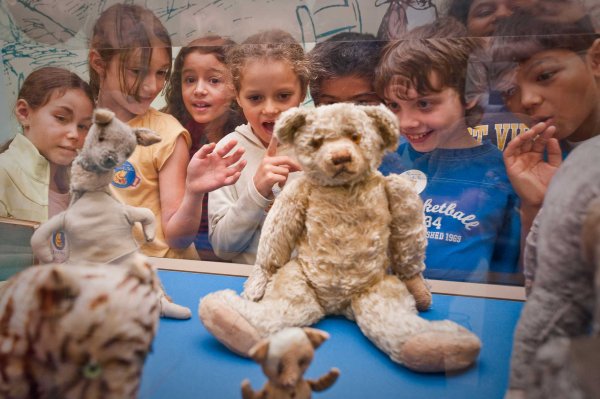 Winnie-the-Pooh Could Be Leaving New York for Britain
Next Up: Editor's Pick