Review: Nicki Minaj Reinvents Herself on Personal The Pinkprint

“I had to reinvent,” says Nicki Minaj at the beginning of her third record, The Pinkprint. It’s less a rap than a plea. The reinvention in question is “All Things Go,” a Drake-like quietstorm lament about the cost of fame. And a reinvention it truly is.

“All Things Go” has nothing in common with “Anaconda,” Minaj’s raunchy flip of “Baby Got Back” that, depending on who you ask, is either a revelation or out of Revelations. It’s got something in common with “Pills N Potions,” her moody erstwhile Top 40 single, but where the former was made for radio, “All Things Go” was made for being kept up at night forever. “There’s never been such a huge gap between two [of my] singles,” Minaj said about those two, and “All Things Go” widens the gap even more. It’s the track where she stamps her bid for rap history, a counterpart to Jay-Z’s iconic The Blueprint: “This is the Pinkprint,” she says forcefully. It’s also the track where she contemplates giving it all up to be with her family — to take her future kids to preschool — and sounds entirely like she means it.

It’s a contradiction, in other words, and a tough one even by the standards of Minaj’s career, which is both impressive and impressively torn. Nicki has her ever-loyal core fans, her Barbz — all major artists do. But she’s also got the Mixtape Nicki fans, who show up once an album cycle to be appeased by the promo tracks and haughtily bemused by the record. She’s got her Pop Nicki fans, the ones who loved “Super Bass” and “Starships,” although the biggest Pop Nicki fan may be the pop market itself, which demands and demands until artists die. She’s got Character Nicki fans, the ones who can relate every detail of Roman Zolanski, Harajuku Barbie and the rest of Minaj’s sometime personae in encyclopedic detail. Then there are the R&B Nicki fans, the Dancehall Nicki fans, and – as usual, louder than the rest – the haters: the ones who use Minaj as a metonym for bad taste, musical and otherwise and often without listening beyond snippets of the singles, and the patriarchal industry forces at which Minaj has taken increasingly explicit shots leading up to The Pinkprint. It’d be impossible to sate even one of these groups, let alone them all.

Little surprise that her last album, Roman Reloaded, was a fragmented attempt to serve every demographic at once with Nicki content. As a marketing strategy, it’s fine, even smart – one of Nicki’s many underrated qualities is her marketing acumen – but for a grand Blueprint-esque statement, it won’t do. The Pinkprint, mercifully, barely tries to satisfy the masses. The Mixtape Nicki tracks, as usual, were relegated to promotional tracks. “Anaconda” is an anomaly that exists in its own Top 10 partyland. The pop songs might be more lugubrious than the urban-radio fare.

What we get instead are entirely new Nickis, of her own invention and on her own terms. First is Confessional Nicki – in the singer-songwriter sense of introspective ballads designed for wistful use. Much has been made of The Pinkprint being a “breakup album” – specifically, about Safaree “SB” Samuels, her rumored longterm companion. Part of it’s how intensely private Minaj is: the sort of woman whose media statements are things like, “If I call the ambulance, it’s gonna be on TMZ,” and whose relationship, or whatever it was (she’s that reserved) played out largely not in public but in little plausibly deniable lyrical nudges. He’s been more forthcoming – and publicly salty – about its demise than she was. More of it’s the urge to cast Nicki in increasingly salacious and/or gossipy lights, which women – and women of color especially – know well.

But The Pinkprint’s best confessional stretch is barely about boyfriends. (In a Complex cover story, she specifically talked down that idea.) “All Things Go” is starkest when addressing the shooting death of Minaj’s cousin Nicholas Telemaque, and her subsequent self-laceration: “His sister said he wanted to stay with me, but I didn’t invite him… yes, I get it, I get it was all me; I pop a pill and remember the look in his eyes the last day he say me.” “I Lied” is about a breakup, but it’s more about the fear of vulnerability, down to the visceral fear of being touched; in sentiment it’s not far from Fiona Apple’s The Idler Wheel. The Andrew “Pop” Wansel-produced “The Crying Game” gets starker both in content– “blood drippin’ out your arm on my Asian rugs … now we in the crying game, hearts laced with slugs” – and spiky guitar backing. It’s a hell of a stretch, and it elevates even the more conventionally weepy ballads. Even “Pills N Potions,” which came off simultaneously too druggy and too drippy for the radio, works here, because it has stakes.

Not that The Pinkprint’s a downer. We’ve also got Boss Nicki, happy-drunk on the same ego she laments on “I Lied.” On “Get On Your Knees,” Minaj and Ariana Grande revel in both sexual control and vocal control, of the disarmingly pretty instrumental; thank god it didn’t go to co-writer Katy Perry, who’d make it the guy’s domme fantasy that Minaj and company dismiss. On “Four Door Aventador,” she emulates Biggie in flow, and on “Feeling Myself,” she does it all: getting laid, getting off, getting puns off, hanging with Beyoncé, conquering rap, conquering worlds. There’s also Curatorial Nicki, who assembles cred and taste as well as anyone has year. She’s generous with it, turning over a large portion of her grand statement record to Maya Jane Coles samples, Fatima Al Qadiri takeoffs, luxuriant Jessie Ware choruses and Beyoncé, who brings “Feeling Myself” to a halt – a literal halt, then “please resume” – to celebrate the one-year anniversary of her own imperial phase. It’s returning the favor for Bey’s own “Flawless” remix, far from the girlfights or beefs the media loves to make records like these into. The Pinkprint is devoid of all that; it’s a work of solidarity, of boosting, prolonging, even saving careers (if you’re feeling generous, you could call her Skylar Grey collab that). And specifically, those careers are female.

The worst moments on The Pinkprint are the ones where men lumber in to ruin the mood, whether they be Drake, Chris Brown and Lil Wayne trading locker-room inanities on “Only,” or Dr. Luke, who produces both that track and the dismal radio castoff “The Night Is Still Young.” They’re not only unwelcome — they feel tired, as if they’d have been dated years ago. (If you’re not feeling generous, you could call her Skylar Grey collab that too.) They’re necessary intrusions of commercialism that belie Minaj’s claim she “ain’t gotta rely on top 40” and undermine what’s presumably meant to be a classic.

But maybe those are the wrong expectations. Maybe The Pinkprint isn’t so much The Blueprint as, as the cover art hints, a fingerprint: something indelibly unique to one person, to Nicki. At this, it succeeds entirely. 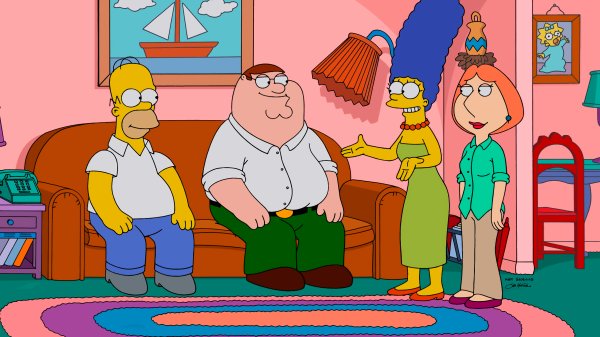