Putin Watches Russian Economy Collapse Along With His Stature

Stability was always the watchword of Vladimir Putin’s presidency, and for more than a decade it rang true. Ever since he came to power in 2000, Putin presented himself as the antidote to what Russians call the “wild ’90s,” the decade of economic upheaval that culminated in the crash of 1998. The high price of oil, and the fortunes it brought the Russian petrostate, have since allowed Putin to keep his promise of prosperity and economic growth. But this week the myth of Putin the Stabilizer collapsed, along with the value of the national currency.

Driven down by a six-month plunge in the price of oil, the ruble lost about a quarter of its value against the dollar in the first two days of this week, its steepest fall since the crash of 1998, when Russia defaulted on its debt. The central bank took drastic measures to avoid the risk of another default on Monday night, hiking interest rates from 10.5% to 17% in a desperate attempt to make Russians keep their rubles in the bank instead of spending them on foreign currency. But it came too late. The rate hike, also the steepest since 1998, only managed to forestall the collapse of the ruble for about 10 minutes when markets opened on Tuesday morning.

Putin, meanwhile, kept his head in the sand. Reporters who called his spokesman with questions about the ruble’s fall were told to call the Prime Minister or the Cabinet, as though the economy was not the President’s concern. The most notable item on the Kremlin’s website on Tuesday was a presidential order to prepare a “fundamental” history of the region of Crimea, which Putin annexed from Ukraine this spring. Though it was hardly a tonic for the national economy, this decree hinted at Putin’s plan for riding out the storm.

The annexation of Crimea, which drove Putin’s approval ratings to record highs this year, is still the main pillar propping up his popularity. But that is not likely to remain the case, according to Lev Gudkov, head of Russia’s leading independent pollster, the Levada Center. “The more people are connected to the market economy, the more critical they are of the rhetoric and demagoguery of our President,” Gudkov wrote in an analysis published on Tuesday. By spring, he predicted, public discontent would reach down to the poorest and least educated segments of the population, as economic realities they see all around them stand in ever starker contrast to the rosy picture presented on Russian state TV.

The government admitted as much on Tuesday. “We are ending the year with 15.7 million poor people nationwide,” said Olga Golodets, the Deputy Prime Minister in charge of social affairs. “And in the context of inflation their numbers will inevitably grow, especially among families with children,” she told a meeting of officials and social workers.

That’s a startling prospect for a nation that has seen a steady decline in the poverty rate since Putin came to power. But when the Cabinet held an emergency meeting on Tuesday to discuss the ruble crisis, the ministers failed to come up with any concrete measures to prevent the economy from sinking into a deep depression next year. Already there is talk of Russia being forced to introduce capital controls, or imposing restrictions on foreign trading to make it harder to sell off rubles. That might be enough to save the economy, but it would damage domestic firms and outrage the business elites who have been among Putin’s closest supporters.

As the recession takes hold, the state’s most reliable means of deflecting public outrage will, as usual, involve blaming the West. So far pro-Kremlin news outlets have tended to avoid blaming the fall in the oil price on some kind of American conspiracy, but Putin will be tempted to offer the public such fables as the economy continues to sink. “This is the only answer,” says Kirill Petrov, chief analyst at Minchenko Consulting, a Kremlin-connected political-advisory firm. “This line would be effective, at least in the short term.”

Still, the Kremlin seems to recognize that, in the longer term, it cannot continue its struggle with the West over Ukraine without piling ever more strain on the Russian economy. That much has been clear from Putin’s softer tone toward Ukraine during the recent drop in the ruble’s value. On Tuesday, Russian Foreign Minister Sergei Lavrov even denied that Moscow has “any difficulties” in its dialogue with Ukrainian leaders, and his American counterpart, Secretary of State John Kerry, said the same day that Russia has been making “constructive moves” toward resolving the Ukrainian conflict.

It’s not likely to be enough to persuade the U.S. to ease the pressure on Russia’s economy. Indeed, President Barack Obama is expected later this week to sign a bill piling more sanctions on Russian state companies and businessmen. That may provide fresh ammunition for Putin’s anti-American rhetoric, but it could worsen what is already a dire economic situation at home. And if the President continues trying to dismiss those problems as the necessary price of his foreign policy, the core promise of stability that he made to his people upon taking power will crumble along with his country’s currency. At this rate of economic decline, the “wild ’90s” could wind up feeling tame in comparison with what’s to come.

Read next: Why Russia Is Destroying Its Own Economy 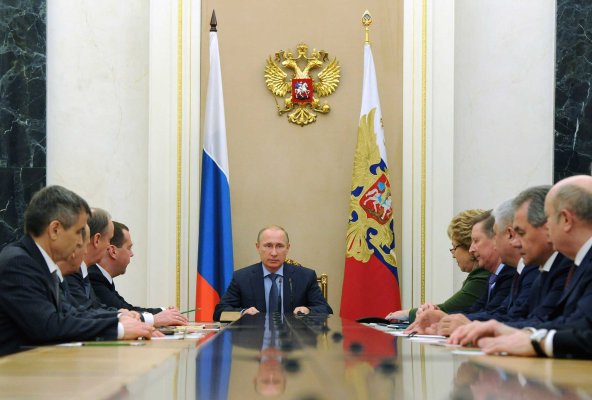