Why the Road to Ferguson Was a Freeway

After grand juries in New York and Missouri failed to indict police officers who killed unarmed black men, protestors across the nation vented their outrage by shutting down roads. In our own freeway metropolis, marchers temporarily shut down the 110 and 101 freeways, blocking two of Los Angeles’ central arteries.

Why freeways? Why not buses, streetcars, parks, lunch counters, or other ordinary spaces that have staged historic protests against racial injustice?

Blocking freeway traffic with bodies certainly heightens the urgency of the protestors’ cause. And while their preferred target creates a hassle for a good many commuters, and might seem less relevant than city halls or police headquarters, freeways are historically appropriate venues for today’s protests. They have fractured American race relations since 1956, when Congress passed the Interstate Highway Act.

The act unleashed armies of bulldozers on American cities, gutting entire neighborhoods to superimpose raw concrete upon city landscapes. For better or for worse, freeways emerged as the centerpiece of 20th century urbanism in the United States, clearing the pedestrian bustle of streets and sidewalks in favor of garages, drive-ins, shopping malls, and parking lots.

This development contributed to the creation of “two societies, separate and unequal, one black, one white,” in the words of a 1967 presidential commission on the causes of racial unrest in cities across the nation. Mass suburbanization, enabled by the automobile’s promise of unfettered mobility, divided the nation into demographic clusters around religion, class, occupation, party affiliation, and race.

While highway construction nurtured the growth of white suburban enclaves, it devastated urban communities of color. In Southern cities like Nashville, Charlotte, Atlanta and Kansas City, highway planners were often in league with white supremacist organizations as they designated black neighborhoods for destruction. In his dual capacities as Alabama’s state highway director and executive secretary of the White Citizens’ Council, for example, Samuel Engelhardt routed interstates through the black neighborhoods of Montgomery and Birmingham.

In more “enlightened” cities, highway planners cleared neighborhoods marked by race and poverty in the name of eradicating “blight.” Yes, many white, middle class, and affluent neighborhoods were targeted for freeway construction too, but these often staged successful “freeway revolts” to block the bulldozers, thus leaving poor minority communities isolated in the path of destruction. Thus while we celebrate the celebrate the victories that blocked the freeway from wiping out Manhattan’s Soho or New Orleans’s French Quarter, we’ve forgotten the historic black neighborhoods of Miami and St. Paul that were erased from the city’s map.

Here in Los Angeles, highway construction has shaped a stark geography of racial difference. Just drive through Boyle Heights on the city’s Eastside. It’s almost impossible to venture half a mile without passing under, over, or alongside a major interstate highway. Freeways cast deep shadows over the landscape of daily life, wrapping around homes, parks, schools and churches. Although they organized in opposition to the construction of five intersecting freeways, local residents were unable to muster the wherewithal of Beverly Hills, which stopped one freeway dead in its tracks.

Where today’s protestors have decided to take a stand reminds us that urban highway construction is part of America’s “race problem.” When demonstrators overtook Interstate 580 in Oakland on the night of Nov. 24, they stood over the ruins of what had been a prosperous black community some 50 years ago. In this way, today’s protestors are only the most recent brave Americans willing to seize control of the very spaces that enforced their second-class citizenship.

Whether or not we agree with their strategy to arrest the flow of freeway traffic, today’s protestors remind us that racial inequality has shaped not only the system that governs our society, but also the very landscape that surrounds us.

Eric Avila is Professor of History, Chicano Studies and Urban Planning at University of California, Los Angeles. His latest book is The Folklore of the Freeway: Race and Revolt in the Modernist City (Minnesota, 2014). He wrote this for Thinking L.A., a project of UCLA and Zocalo Public Square. Zocalo Public Square is a not-for-profit Ideas Exchange that blends live events and humanities journalism. 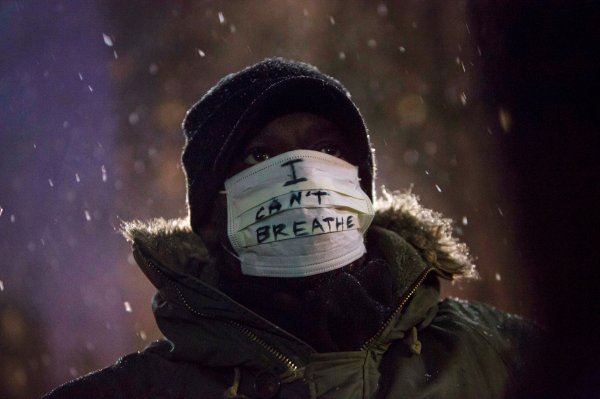 Poll: 57% of Americans Say Race Relations in U.S. Are Bad
Next Up: Editor's Pick