A man crosses the Central Intelligence Agency (CIA) logo in the lobby of CIA Headquarters in Langley, Virginia, on August 14, 2008.
Saul Loeb—AFP/Getty Images
By Maya Rhodan

Attorney General Eric Holder has given federal prosecutors permission to subpoena New York Times reporter James Risen for some information regarding his connection to a former employee of the Central Intelligence Agency.

Though New York Times reporter James Risen has been adamant about not revealing his sources and the Department of Justice indicated last week it would not force the Pulitzer Prize winner to reveal who his sources were, prosecutors announced Tuesday they will be seeking his testimony in the case of Jeffery Sterling.

The Department of Justice charged Sterling, a former agent, of unlawfully obtaining documents and spilling national secrets in 2010, and subsequently accused him of being a source in Risen’s 2006 book State of War.

According to a court filing, prosecutors needed approval in regard to the subpoena given new Department of Justice guidelines on seeking information from the news media. The guidance, issued in July, provides some protection from members of the media in civil and criminal proceedings. The guidance came following scandals involving the DOJ seizing phone records and emails of reporters from the Associated Press and Fox News.

Media organizations and advocacy groups including the Newspaper Association of America have been calling on Congress to pass a law that would protect journalists from having to reveal their confidential sources in criminal and civil proceedings without having to face legal consequences.

A federal judge in Virginia requested last week that the federal attorneys come to a clear decision on whether or not they would subpoena Risen by Tuesday.

Requests for comment from Risen’s attorneys were not immediately answered. 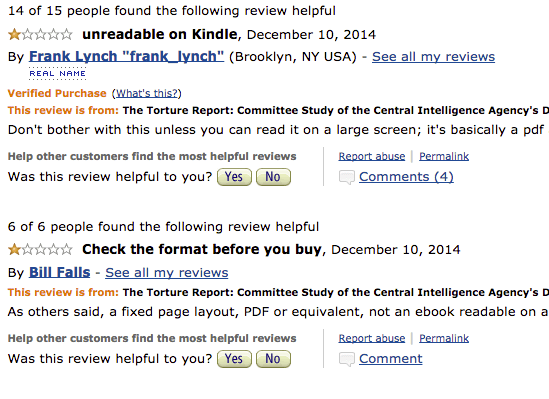 People Are Complaining the Torture Report Is 'Unreadable' on Amazon Kindle
Next Up: Editor's Pick