The One Issue that Will Complicate Jeb Bush's Campaign

Jeb Bush loves Common Core. The Republican base hates it.

Bush’s announcement this morning that he plans to “explore the possibility of running for President of the United States” means that the Republican Party is going to have to sort out where it stands on this tinderbox of an issue.

Common Core is a set of academic standards put together by a bipartisan group of governors and promoted by the Obama administration. While both Republicans and Democrats first embraced the standards back in 2010 and 2011, they have fallen out of favor in the last few years. Grassroots conservatives and Republican office-holders now regularly condemn it as “federal overreach” and parents have protested changes in how subjects like math are taught under states’ new Common Core-aligned curricula.

Common Core now represents a kind of shorthand among Republicans: if you’re a real conservative, you’re against it; if you’re a faker, you’re for it. As a result, Republican governors in Oklahoma, Indiana, South Carolina and Missouri have scrambled to get on the right side of that divide, angrily decrying Common Core as “shameless government overreach” or even smearing it as “Obama-core.”

Louisiana Governor Bobby Jindal, who is often listed among the potential Republican presidential hopefuls, used to support Common Core, but now is so publicly against it that he has launched lawsuits against his own state and the U.S. Department of Education, claiming that the standards are a violation of state rights.

While most of that is shameless political theater, it still leaves Jeb Bush in a tricky position: in order to win the Republican nomination, he’s going to have to win over the Republican conservative base, which hates Common Core with the fire of a thousand suns. The easiest way to do that would be to disown Common Core. But that’s not likely to be in the cards.

For the past two years, Bush has been one of the loudest proponents of Common Core, among both Republicans and Democrats, boldly refusing to walk back his support—even when members of the Florida Tea Party called for his head, and even when the issue threatened to derail Republican Rick Scott’s tight race during this year’s midterms.

In late November, Bush told a crowd at a national education summit hosted by his group, the Foundation for Excellence in Education, that while he found the debate about Common Core “troubling,” he support was unwavering. He seemed to suggest that conservatives had been tricked into thinking that the Common Core was a federal program. “Education should be a national priority, not turned into a federal program,” he told the crowd, before urging them to keep fighting for reform and for Common Core.

This leaves Bush—and the Republican Party, too—with two basic choices. Bush can continue to embrace Common Core, but work with the Republican Party to rebrand it as an essentially Republican, states rights issue. Or he can walk back his support for the standards, which would be seen by many moderate Republicans, as well as his supporters in the education reform community, as a shameless cop-out.

Alternatively, Bush could take a page out of Mitch McConnell’s book, and do a little of both. After all, during the November midterm, McConnell angrily condemned Obamacare, while simultaneously supporting Kynect, which is Kentucky’s version of Obamacare. Voters didn’t seem to care.

While all of this politicking makes it seem like Common Core must be a wildly exciting—innovative! disruptive! far-reaching!—federal policy, it’s actually none of those things. It’s not even federal policy.

Common Core is not a national curriculum. It does not tell districts what books they have to buy, nor does it tell teachers how they need to teach. (Under Common Core, states and local school districts still have complete control over that stuff.) And perhaps most importantly, it’s not even a federal program. In March 2010, 40 state governors and their state chiefs of schools formally adopted the Common Core. By the end of the next year, a total of 46 states—led by both Republicans and Democrats—had signed on.

One reason that bipartisan moment didn’t last for long is that Obama’s Department of Education began to tie federal funding, though the Reach for the Top grants, to whether states had adopted either the Common Core standards or a state version that was equally robust. That gave the Common Core standards the sheen of being a top-down federal government program—which angered the Republican base.

The other main reason that Republicans turned against Common Core was that the program was poorly implemented. In some states, teachers were asked to teach to the Common Core standards before the states had even come up with an adequate curriculum or corresponding tests. In other states, new “Common Core-aligned” curricula were so confusing that teachers, parents, and students rebelled. According to an October Gallup poll, 58% of Republican parents now hold a negative view of Common Core—up from just 42% disapproval in April. Fewer than one in five Republican parents think the Common Core is a good idea.

If Bush wants the Republican nomination, he’s going to have to find a way to change some hearts and minds. 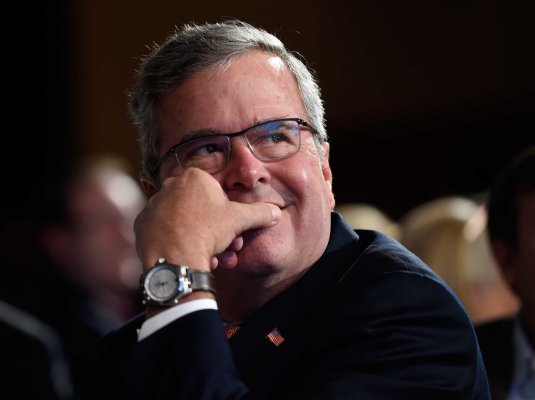 Jeb Bush Bets on a Sunshine State of Mind
Next Up: Editor's Pick