What Russia's Ruble Collapse Means for the World

Russia’s ruble is melting down faster than you can say “Vladimir Vladimirovich”. That’s nothing short of disastrous for him–but it ain’t good for you either.

The ruble fell a jaw-dropping 11% against the dollar Monday. Even when seen in the context of the dollar routing all emerging market currencies (Brazil’s real fell 1.2% and South Africa’s rand 1.5%), a move like that is straight out of the Financial Crisis Handbook–completely unsustainable. Russia has seen nothing like it since it defaulted on its domestic debt in 1998.

Given President Vladimir Putin’s status as the West’s new bogeyman, the temptation to rejoice in the abrupt collapse of his regime’s economic clout is acute. Many will want to congratulate themselves at the success of economic sanctions, the aim of which was to punish Putin for his annexation of Ukraine and its covert sponsorship of a civil war there.

They shouldn’t get carried away.

For one thing, it doesn’t make Russian concessions on Ukraine any more likely: the worse the economic pressure, the more the Kremlin’s propaganda will drum home the message that it is the Evil West, denying Russia its holy Crimean birthright, that is to blame. Opinion polls suggest that the vast majority of Russians still accept this version of events.

As such, Ukraine will remain a running sore, infecting both the European economy and, through it, the world’s. Moreover, Ukraine itself is on the verge of a default that will send shock waves through European and global financial markets, amplifying the effect.

A financial crisis in Russia would have much larger negative consequences than a Ukrainian one: western banks (mainly European ones) will have to write off more loans, western companies will have to write off investments. And that’s even if contagion doesn’t spread to other vulnerable emerging markets such as Indonesia or Brazil, both big recipients of western investment.

For the moment, the signs are that Putin is gambling on the oil market turning round, trusting to the legendary endurance of the people while his government keeps the plates spinning as long as it can.

In the meantime, the loyal will be taken care of. Covert bailouts to the country’s biggest banks from the country’s rainy-day fund are already getting more frequent. VTB and Gazprombank, two lenders that are “too-big-to-fail”, have already had their capital levels topped up.

But that is nothing compared to the egregious piece of money-printing that was agreed last week, when the central bank agreed to lend money against 625 billion rubles (still over $10 billion, even after Monday’s mayhem) of bonds freshly printed by Rosneft, the oil company headed by Putin confidant Igor Sechin. The aim is to let Rosneft hoard its export dollars and meet a $10 billion loan repayment later this month (and another $4 billion in February).

The realization that Rosneft, one of the biggest players on the foreign exchange market, would be buying far fewer rubles with its export dollars appears to have been one of the reasons for the ruble’s drop Monday (the failure of the central bank’s half-hearted rate hike and intervention last week also being partly responsible).

If the central bank shows anything like the same generosity to other companies, then the ruble’s debasement will be complete. The central bank now estimates that the economy will shrink 4.5% next year if oil stays at $60/barrel, and that is something that would certainly trigger a wave of corporate defaults.

Unless the ruble bounces back sharply, inflation is heading much, much higher than the 10% the CBR is already forecasting. Specifically, food, which makes up over 30% of Russian disposable income, is going to get more expensive (Russia imports over 40% of its food and has made a rod for its own back by banning relatively cheap produce from the E.U.).

Moreover, since over 80% of retail deposits are now held in rubles, devaluation means that the savings that Putin’s voters have accumulated as they came to trust their own currency over the last 14 years will be devastated. Already Monday, the yield on the 10-year bonds of a government that hasn’t run a deficit in 14 years hit 13%–anything but an expression of trust.

This is a recipe for social instability far greater than the tame, middle-class, metropolitan protests at Putin’s tainted election victory in 2012.

But what does an authoritarian leader do in such a situation? Back down or crack down? There is no evidence from this year to suggest Putin has suddenly become the backing-down kind. Repression seems the likelier option. If that doesn’t work, then doubling-down with another foreign policy adventure to distract from domestic problems hardly seems fanciful any more: in the summer, Putin cast doubt on the statehood of neighboring Kazakhstan, which doesn’t have the NATO guarantee that the Baltic States enjoy.

Either way, the consequences are too miserable to contemplate, both for Russia and for the world in general. The only other way out is for Putin to be replaced in a palace coup. That’s a time-honored Russian tradition too, but anyone with memories of 1991 and 1993 will remember how badly they can go.

Barring a rapid turnaround in the oil price, there are only bad and worse outcomes from here on. 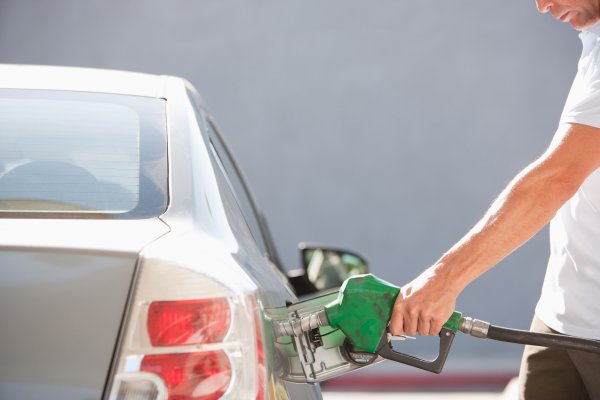 Gas Was Dirt Cheap This Weekend
Next Up: Editor's Pick