High-tide: layering in a Mars rock photographed by Curiosity suggests the movement of long-ago water
NASA/JPL
By Michael D. Lemonick

September of 2013 was a bad time for those who hope there’s life on Mars. We’ve had evidence for decades that water flowed freely across the surface of the Red Planet billions of years ago, and that evidence has only gotten stronger and stronger the closer we look. Not only was there potentially life-giving water back then: Mars also had the right kind of geology to support mineral-eating microbes. And while all of that was in the distant past, the detection of methane in the Martian atmosphere by Earth-based telescopes and Mars orbiters raised hopes that bacteria might still be thriving below the surface—not unreasonable, both because all manner of Earthly critters do perfectly well below-ground and because the vast majority of methane in our own atmosphere results from biological activity. Mars’s methane might come from a similar source.

But when the Curiosity rover sniffed the Martian air directly last year, it smelled…nothing. At most, there were just three parts per billion (ppb) of methane wafting around, and possibly much less than that. “We kind of thought we’d closed that chapter,” says Christopher Webster of the Jet Propulsion Laboratory, lead scientist for the instrument that did the sniffing. “A lot of people were very disappointed.”

Not any more, though. Just weeks after that dismal reading, Curiosity’s Tunable Laser Spectrometer (TLS) picked up a whiff of methane at a concentration of 5.5 parts per billion. “It took us by surprise,” says Webster, and over the next two months, he says, “every time we looked there was methane. Indeed, the concentrations even rose, to an average of 7.2 ppb over that period, he and his colleagues report in a new paper in Science.

And then, six weeks later, the methane was gone, and hasn’t been sniffed since. “It’s a fascinating episodic increase,” Webster says.

What he and his colleagues can’t say is where the methane is coming from. Because it’s transient, they think it’s probably from a fairly local source. But whether it’s biological or geological in origin, they don’t know. It’s wise to be cautious, however, says Christopher Chyba, a professor of astrophysics and international affairs at Princeton. “Hopes for biology on Mars have had a way of disappearing once Martian chemistry has been better understood. But figuring out what’s responsible for the methane is clearly a key astrobiological objective—whatever the answer turns out to be.”

That’s not the only important Mars-related paper in Science this week, either. Another, also based on Curiosity observations, concerns Mars’s long-lost surface water, and one of the most important points is that there’s a lot more of it left than most people realize—”enough,” says Jet Propulsion Laboratory scientist Paul Mahaffy, lead author of the paper, “to cover the surface to a depth of 50 meters [about 165 ft].” That doesn’t mean it’s accessible: it’s nearly all locked up in ice at the planet’s poles, but some is also entrained in the clay Curiosity dug into when it was prowling the Yellowknife Bay area of Gale Crater.

Some of that water, says Mahaffy, is tightly chemically bound to the clay and is not a big player in Mars’s modern environment. Some is not quite so locked down and has been interacting with the tenuous Martian atmosphere for the past three billion years. The hydrogen in Martian water, as in Earthly water, may contain both a single proton and a single electron, or a proton and electron plus a neutron—so-called heavy hydrogen, or deuterium. As the Martian atmosphere has thinned over the eons, the ratio of hydrogen to deuterium in the water has gradually been dropping, as the lighter version escapes more easily into space. Since the modern water is twice as rich in deuterium as the water from billions of years ago, that suggests that there was about twice as much surface water in total at the earlier time, but its hydrogen residue has vanished.

“That’s a fair bit of water,” says Mahaffy, “but it’s a lower limit. There could be much more beneath the surface today that we haven’t seen. It was a really interesting time. There were a lot of aqueous processes going on, and a lot of flowing water.”

Where there is (or was) water, there could be (or could have been) life. For Mars enthusiasts, that’s why December of 2014 is a lot better than September of 2013. 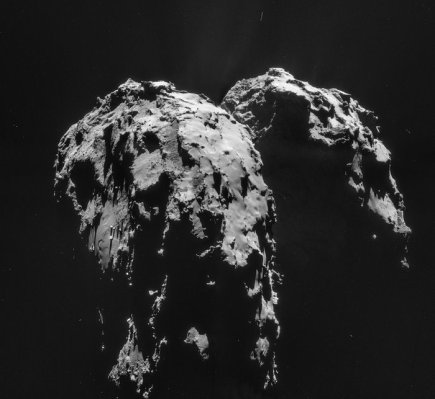 You Can Quit Thanking Comets for Your Water
Next Up: Editor's Pick