How Radio History Hinted at the Conclusion of Serial

Circa 1945, a family of four gathers in their living room to listen to their home radio set
Harold M. Lambert—Getty Images
By Lily Rothman

Warning: spoilers follow for the end of the first season of Serial

The true-crime podcast Serial, which published its season finale Thursday morning, may be a 2014 phenomenon — but, though the 12-episodes-one-story format may have been new for that style of podcast, it’s actually one of the oldest tricks in the radio book.

The idea of publishing a story a little bit at a time is often traced back to Charles Dickens, so when radio became the popular medium of choice in the early 20th century, the benefits of hooking an audience with the drip-drip of a story were already well known. By the 1930s, Procter & Gamble was the biggest radio advertiser in the country, by dint of its serial dramas, the original “soap operas.” The serial had become one of the most popular formats for radio. A 1939 calculation by the chair of radio writing at Columbia University estimated that there were 20,000,000 words spoken each day on U.S. radio — more than all the words spoken in the movies in a year, or on Broadway in ten — and that, at the time, writers of popular daily serials were some of the best paid staffers in the business, earning $1,000 a week.

As Elena Razlogova notes in her history of early radio, The Listener’s Voice, early serials shared something with Serial beyond merely being split up into multiple episodes. Just as Serial was taped as it aired, allowing for those familiar with the case to hear the show and volunteer new information, early radio serials relied on fan mail to help decide how the stories would move along.

Which means there’s something else Serial shares with its predecessors: the fact that, as the podcast’s listeners have discovered by now, the end of the story isn’t known in advance — which often means the conclusion of a radio serial isn’t necessarily an “ending” per se.

According to the Concise Encyclopedia of American Radio, traditional radio serials were popular but “frustrating” because they were “neverending.” Unlike literary serials of the Dickens variety — a format that TIME reported in 2012 was making a comeback on e-readers — radio serials that are written as they go along have tended, historically, not to have a predetermined arc. They just start and see where they go; when the season ends or the show gets canceled, denouement or not, that’s that.

Though Serial‘s season one ended with a guess from host Sarah Koenig that Adnan Syed was probably innocent, her year of research and weeks of podcasting yielded no certainty — a fact that Koenig readily admits in the episode. Syed’s case is still not settled and it seems possible that the world may never know exactly what happened on the fateful day in question, but the season is over so that’s it as far as listeners are concerned. And, given the show’s format, if we ever do find out what happened, it won’t be on Serial season two. So, in that, Serial and old-time serials have something in common with real life as well: unlike in the world of pre-scripted shows, a neat and tidy conclusion is a rarity.

Read more about the return of serial fiction, here in the TIME Vault: Stay Tuned for E-Serials 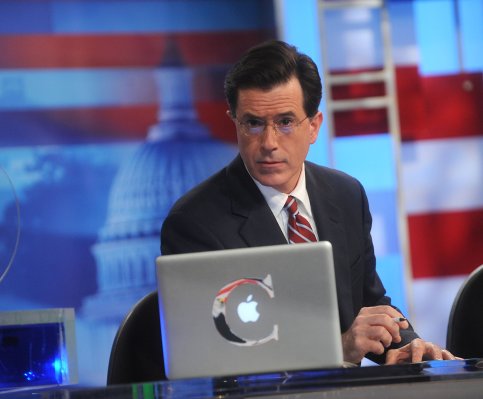 You Can Visit The Colbert Report's Set on Google Maps
Next Up: Editor's Pick