Ferguson Should Be More Than a Moment

National Public Radio host Michele Norris has run The Race Card Project for the past four years. Participants are asked to distill their “experiences, questions, hopes, dreams, laments, or observations about race and identity” into a six word sentence. The results ring true in a way that most polls of racial attitudes do not. They include “Black people are always stealing things,” from a Hispanic woman; “why steal when you’re already looking,” from a young black man talking about the “vibe” he feels whenever he enters a gas station or convenience store; “I’m Appalachian; it’s an invisible ethnicity” from an educated white woman describing others assume she is a hillbilly; and many more.

When it was my turn, my six words were “my ancestors owned slaves; my responsibility.” I grew up in Charlottesville, Virginia, home of Monticello and “Mr. Jefferson’s university.” Most of my fellow Virginians did not think that it was our responsibility to answer for our forefathers’ actions, including the manifest contradictions and inequalities in Thomas Jefferson’s own legacy. But as Ta-Nehisi Coates argues compellingly in his article “The Case for Reparations,” Americans are all too happy to take credit for the good things that our ancestors did. If we celebrate Thomas Jefferson’s authorship of the Declaration of Independence, we must also confront the shocking gap between his words and his actions as a slaveholder who did not free his slaves even at his death.

Today the trustees and docents of Monticello have made Jefferson’s home an opportunity to examine and try to understand the lives of “enslaved peoples” as well as of their masters. I feel a similar responsibility to do whatever is within my power to help address the legacy of injustice that my ancestors helped create. (Lest Americans whose ancestors fought on the Union side feel smug, just remember the vicious resistance to integration that has erupted in cities like Chicago and Boston within recent memory.)

At home, my teenage sons and I have been in deep conversation. We are not certain what actually happened in the confrontation between Darren Wilson and Michael Brown, but we think that conflicting facts and testimony should have been presented in a public trial, to seek truth through examination and cross-examination the way our justice system is designed to do. We accept that Officer Pantaleo did not mean to kill Eric Garner; nevertheless, we have watched the video where he did kill him, even as Garner was begging for help. We think that intentions should not shield a police officer any more or less than they would mitigate the consequences of a crime committed by any other citizen. We read accounts of the Cleveland report on a pattern of police abuse of power against black citizens, including the shooting of a twelve-year-old boy, and believe it is not limited to Cleveland. We shake our heads over the violence in Ferguson and discuss the ways in which systematic injustice will inevitably explode into violence. That, after all, is the lesson of the Boston Tea Party.

Mayor: Officer Who Kneeled on Man Should Be Charged

What gives our conversation immediacy is that my sons and their friends, all good students at a top public school in Princeton, New Jersey, have had various run-ins with the Princeton police for the kinds of stupid things that teenage boys do, including minor shoplifting. The officers they have encountered have been appropriately stern and tough, but in a way that breeds remorse and respect rather than fear and anger. My sons know that it is likely they would have been treated differently had they been black, and certain that they would’ve been treated very differently had they been black and from Trenton.

Together, we are angry and sad and uncertain of what to do next. If there were a march on Washington, echoing the march where Martin Luther King gave his “I have a dream” speech, we would join it. But the scattered protests in various cities do not seem to swell. How can we take part in some larger reaction and affirmation that would harness this moment for good?

The answer is a national dialogue on race and justice. Our society has become increasingly unjust in many ways over the past two decades, as is inevitable when wealthy Americans and the considerable majority of their fellow citizens live in increasingly separate social, economic, political, and physical worlds. But the shooting of unarmed citizens, many of them children, by the very people who are supposed to enforce the law and help deliver justice, creates a concrete and immediate focal point. It offers a way in to a larger conversation about what it means to be citizens of a country that promises “liberty and justice for all.”

Instead of die-ins, we need teach-ins – a 1960s throwback that nevertheless allows real conversation and the beginnings of genuine understanding to take root. Ideally, the White House would appoint a leader for such a dialogue – not a commission, but one man or woman who could move the nation and build a broad coalition of mayors, civic groups, and corporate and community leaders dedicated to ensuring that every town in the nation start talking.

Absent White House leadership, the nation’s philanthropies and leading civil society groups could step up. If ten foundations, led by Ford and Knight, can help save Detroit, they can also fund and help create a national coalition dedicated to holding conversations and producing actions in every community in the country. If we do not seize this moment, we are not only wronging our fellow citizens, we are betraying ourselves.

The president and CEO of New America, Anne-Marie also hosts the magazine’s weekly podcast, writes a monthly column for Project Syndicate, has written or edited six books, and contributes to the The Atlantic, The New York Times, and Foreign Policy. This piece was originally published in New America’s digital magazine, The Weekly Wonk. Sign up to get it delivered to your inbox each Thursday here, and follow @New America on Twitter. 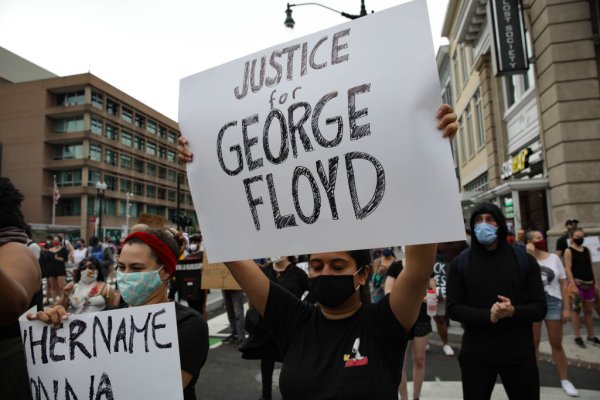