Al Pacino in a scene from the film 'The Godfather: Part II', 1974.
Archive Photos / Getty Images
By Richard Corliss

Francis Ford Coppola didn’t want to make a sequel to his 1972 Oscar-winning blockbuster, recommending Martin Scorsese, fresh off Mean Streets, for the job. He finally said yes when Robert Evans of Paramount Pictures agreed that Part II could include extensive flashbacks of the young Vito Corleone, played by Mean Streets comer Robert De Niro. Marlon Brando was out because he wanted too much money, and the Clemenza character got dropped because Richard Castellano wanted his dialogue to be written by a friend. Director Elia Kazan, the first choice to play Hyman Roth, spent so much time with his shirt off during a conversation with Coppola that when Lee Strasberg was hired for the role, Coppola insisted he play one scene topless. That’s Francis’s mother Italia in the casket as the deceased Mama Corleone — actress Morgana King thought it bad luck to lie in a coffin — and his Uncle Louie, a dead ringer for Brando, in the Havana cake scene.

Coppola provided these anecdotal nuggets in a commentary on the 2001 five-disc DVD of the saga he made from Mario Puzo’s novels: The Godfather in 1972, The Godfather Part II 40 years ago (its New York premiere was Dec. 12, 1974; it arrived in theaters about a week after) and The Godfather Part III in 1990. Third time was not the charm, but the first two were sensationally popular, influential and cherished. Both won Oscars for Best Picture — the first and only time that’s happened — and made enduring stars of De Niro, Al Pacino (as Michael Corleone), Diane Keaton (Michael’s wife Kay), James Caan (his brother Sonny) and Robert Duvall (Consigliere Tom Hagen).

In TIME’s Godfather Part II review, titled “The Final Act of a Family Epic” — who knew, back then, that every movie epic had to be a trilogy? — Richard Schickel described the Lake Tahoe scene of a party celebrating Michael’s son’s First Communion and noted:

The Godfather was its year’s box-office champ — its $135-million take at North American theaters would be nearly $700m today — and, in real dollars, still in the all-time top 25. Part II was sixth on the 1974 chart (Mel Brooks’s Blazing Saddles was No. 1) and is widely considered the darker and stronger of the pair. Together they formed a bold mural of America: crime infiltrating big business and Washington politics, all intersecting with the Corleones’ family values.

God I and God II had both immediate and lasting impact. They helped define machismo for a couple generations of young males, maybe females too. The films spawned countless Mafioso movies, and of course The Sopranos — in fact, every vaunted TV drama about loving families with a dirty secret. (They’re vampires, they’re polygamous, they run a meth business, they’re Commie spies.) True Blood, Big Love, Breaking Bad, The Americans and countless other were forged from the Corleone template.

On the Internet Movie Database’s all-time Top 250, “as voted by regular IMDb users,” the two Godfather films rank second and third, behind only The Shawshank Redemption (a terrific film but… come on). And who wouldn’t rate Michael’s New Year’s Eve takedown of his traitorous brother Fredo (John Cazale) as one of the greatest movie kisses? That “You broke my heart” moment was both passionate and chilling, like the films themselves. Part II’s final shot, closing in on Michael as he ponders the sins that brought him his power, left viewers to determine his admixture of hero and monster.

Forty years on, the films’ core stars are still prominently around. After seven Oscar nominations (two for The Godfathers), Pacino finally won Best Actor in 1993 for Scent of a Woman. De Niro matched his Supporting Actor Oscar for The Godfather with a Best Actor for Raging Bull. Keaton was Oscared for Annie Hall (one of her four nominations) and Duvall for Tender Mercies (one of his six). To these and Caan, add Francis’s sister Talia Shire (Connie Corleone) and his director daughter Sofia (“Child on Ship” in Part II). Also two legendary 88-year-olds: B-movie mogul emeritus Roger Corman (“Senator #2”) and that supreme hangdog character actor Harry Dean Stanton (“F.B.I. Man #1”).

As for Coppola, he had a great 1970s — The Conversation and Apocalypse Now as well as the first two Godfathers — but found it increasingly hard to raise financing for films he wanted to make. “It’s ironic that people should look back decades later and celebrate films I was given a lot of trouble on,” he said on the DVD commentary, “but that nobody wants me to make a movie right now. Talking to me about The Godfather is like talking to me about my first wife when I’m sitting next to my second one. I’d rather get some encouragement on what I’m doing now than celebrate old projects. It was no fun 30 years ago, and I’m still doing it, and I didn’t want to.”

That was in 2001, when the director was in a 10-year dry spell between projects. Since then, he has poured the profits from the Francis Ford Coppola winery into making his own low-budget, minimally-released indie films: Youth Without Youth, Tetro and the 3-D Twixt — intimate, moody melodramas closer in spirit to his 1963 Dementia 13 than to the impossibly ambitious films of his early prime.

At an indefatigable 75, does Coppola look around, see the stars he discovered still in the game, and wonder if maybe it’s time for a Godfather Part IV?

Read TIME’s review of The Godfather Part II here in the TIME Vault: The Final Act of a Family Epic 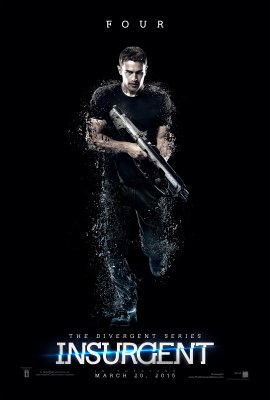 Watch Shailene Woodley in the Sexy New Insurgent Trailer
Next Up: Editor's Pick