Here's What It's Like Inside New York's First Cat Café

Meow Parlour, New York City’s first permanent cat café, will open its doors on Monday, Dec. 15. Cat lovers will be able to make reservations online and spend up to five hours ($4 per 30 minutes) hanging out at a storefront space on Manhattan’s Lower East Side while playing with cats provided by Kitty Kind, a local rescue and adoption group. Seven felines are there to start — with names like Lucky Lemon and Squinkles — but co-founders Emilie Legrand and Christina Ha hope to eventually feature about a dozen cats. Later this month, the Meow Parlour Patisserie will open nearby so customers can buy macarons and jam cookies shaped like cat faces and bring them to the Meow Parlour, which is how the space complies with city health regulations.

Upon entering Meow Parlour, humans must take off their shoes on a mat that says “BEWARE OF CAT” (a house rule meant to prevent the spread of germs). A few steps past the litter boxes, friendly felines may be curled up atop brown and beige pillows scattered across the floor or inside a cardboard ice cream truck or a comfy gray nap pod. There’s a custom-built wooden bench along the back wall where the cats weave in and out of openings underneath or perch in the bookshelves above, which have more cotton-canvas cat beds for napping and people watching, as well as throw pillows featuring cat illustrations and the words “le chat” (French for cat). Even the legs of the tables for humans have steps inside so the animals can climb up as customers sit on metal bar stools.

This “cat heaven” of sorts is the latest in the cat café trend that dates back to the late 1990s in Taiwan and Japanese cities like Tokyo and Osaka, where they became refuges for people who lived in apartment buildings that didn’t allow pets. While Purina ONE hosted a four-day-long pop-up cat café in the same Manhattan neighborhood earlier this year, Meow Parlour would be the second in the U.S. — Cat Town Cafe in Oakland became the first when it opened almost two months ago. Now there are cat cafés throughout Europe in Paris, London, Vienna, Budapest, as well as in Canada and Australia. More are expected to open in Seattle, Portland, Oregon and Washington D.C. sometime in 2015.

And at a time when cat videos are so popular online that there are cat video festivals and cat art shows nationwide, cat cafés are sure to become another space where cat fans can connect IRL.

With reporting and video by Salima Koroma, Carlos Martinelli, and Adam Perez. 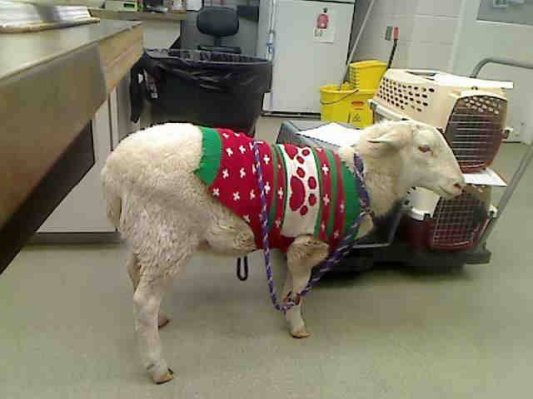 Sheep in Christmas Sweater Found Wandering the Streets of Omaha
Next Up: Editor's Pick